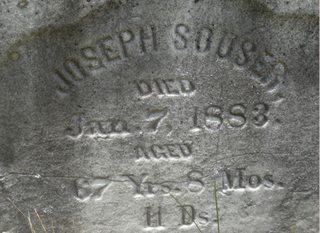 This is believed to be him (date of photograph unknown). 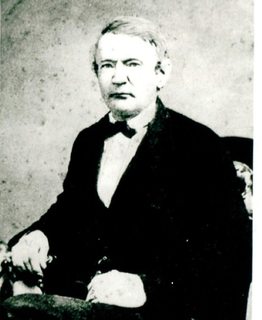 Said to be an orphan, and was raised by someone other than a Souser. He ran away from them at the age of 12, and became a shoemaker's apprentice (where?). Which he then continued to do the rest of his life. The use of the name Souser is not know if it is his actual original name, or an adopted name. He had just always used it. He also believed he had a brother, but never was able to find him, so was not sure. When he ran away he swam across the Susquehanna river it is said..

To date I have done Y-111 and Autosomal DNA tests on several the Sausser's & Sauser's in the area completed or pending and multiple lines of his descendants and so far not been able to triangulate a either side of his parents clearly.

There are still some Souser & Sauser lines that have not yet been DNA tested which I am working on.. in particular the Catskill, NY Souser line which split up after the American Revolutionary War; the main surviving line in Michigan today.

My closest DNA match is to two Cooper's which I have a 0 & 1 generational GAP on Y-37 (but they have not tested higher) and have not responded to me upgrading their kits and they both originated in New York state and passed to the midwest through this time period. I have no Y-67 or Y-111 matches beyond his direct descendants.

My closest historical leads in the time frame has been the Sausser's in Berks, PA who were tailors and shoemakers and a two of the early child tombstones in the family plot in Bedford, PA are spelled Sausser (but his marriage record in 1835 in Bedford is Souser). The adoption of Joseph Souser Michael Sausser's children but that has not panned out..

I have so far found no other adoption / probate records have been found for a Joseph with the birth date in the area.

His will also does not give any clues on his parentage.

Browse other questions tagged united-states 19th-century birth-records pennsylvania or ask your own question.

3
Finding details of an 1821 Berks County Pennsylvania Guardian appointment of two minors?
3
Is there a place I can search specifically by birth date for a list of people born on that date?

4
Tracking down an adoption in New Mexico from 1916
9
Would there be 1830-1850 US naturalization records for children born Canada to parents born in US when relocating back to US?
7
Finding records prior to 1838 for Malone, Franklin County, NY or St. Lawrence County, NY?
3
How can I establish an early 19th century birthplace?
3
Reports of Run Aways, Homeless Children, Orphaned Children in ~1815-1830 PA?
1
What civil documents would exist for a mid-19th Century Central Pennsylvania Marriage?
3
Who were the parents of the Anna who married Elisha Strong?
3
Finding details of an 1821 Berks County Pennsylvania Guardian appointment of two minors?
4
Finding Specific Railroad Segments in the United Started named after employees?