What do Family Tree Maker users do, now that FTM has been discontinued?

I was considering purchasing Family Tree Maker only to find it has been discontinued.

What do they plan for a replacement ?

MacKiev has a page with details at Free updates for FTM 2014 and Mac 3 users Update Center Information Page with instructions on how to perform the upgrade.

Q I already own FTM 2014 or FTM Mac 3. Do I need to purchase this new version? A. No. There is a free update available. If you haven’t been notified that your update is ready, please sign up for our mailing list at www.familytreemaker.com and you’ll receive instructions and a link in a few days.

Older information is below the dividing line.

The blog post continues with an update on Ancestry's agreement with RootsMagic. See the full post at: http://blogs.ancestry.com/ancestry/2016/02/02/good-news-for-users-of-family-tree-maker/#sthash.ZNclKaeZ.dpuf

And from the RootsMagic blog:

RootsMagic and Ancestry: Working Together at Last posted 2 Feb 2016

They promise that RootsMagic will be able to sync with Ancestry online trees, search Ancestry, and import FTM files directly.

Update: Here's how Ancestry.com responded to my question about syncing: "Family Tree Maker will continue to have syncing capability with Ancestry trees, however this feature may evolve as Software MacKiev updates the software.

"It will use different underlying technology than our current TreeSync but it effectively provides the same basic functionality of allowing the user to keep data in their online tree and data in their desktop tree consistent."

My take, given what I've read, and from comments made by Ancestry employees:

I suspect more new customers were interested in having mobile apps than in the desktop software, and someone decided to allocate Ancestry's resources to the mobile apps, instead of maintaining and fixing the notoriously buggy FTM2014. One clue is in the quote contained in this answer where they allude to declining software sales. This is a hint that someone might have expected the income from the sales of the desktop software support the division that maintained the software. Note that Ancestry recently changed hands, and it's not usual for new owners to look for ways to trim the budget.

In dropping Family Tree Maker, Ancestry has abandoned the vertical integration between the desktop software and the website. This may put them at a competitive disadvantage against sites like MyHeritage, which gives away its Family Tree Builder software for free. MyHeritage also opens up their API for other third-party products like FamilyHistorian and RootsMagic so their users can make use of MyHeritage's hint system. RootsMagic and other software also allows users to interact with FamilySearch's Family Tree.

Ancestry may open up their API as well, but we don't know how long that will take or how useful it will be once they have done it.

So the question you might want to ask now is:

Is it worth buying FTM2014 now, despite the upcoming EOL date?

The deadline for buying the download from Ancestry has passed, so if the downloads have been shut off as they predicted, that means finding a boxed copy.

One reason to buy it might be to use TreeSync to pull down your information and images from your online Ancestry Trees. This function should be supported for another year. On the other hand, many people have reported having terrible trouble with TreeSync, so expect to spend some time checking that all your data has actually been captured.

The major reason to use TreeSync over exporting a GEDCOM is, in my opinion, the ability to download most of the record images (what Ancestry's FTM support calls "citation media") from the website. These are not automatically downloaded when you export a GEDCOM file on Ancestry's site and download it for use in another program -- an exported GEDCOM only saves links to the record detail (their 'transcription' or extract/abstract) page. Using third-party software and/or an exported GEDCOM, you have to download all the images yourself if you want to have a copy offline -- and you DO want to have an offline copy, because you lose access if you discontinue your sub, or if Ancestry loses the rights to host that database.

However, the user has to read the support docs carefully to understand exactly what TreeSync captures.

These are some of the 'gotchas' that I've discovered so far. Note that my experience with TreeSync is extremely limited, and I hope that others will comment if I've made errors.

I purchased FTM2014 after the announcement was made, in order to use TreeSync. I bought a copy of the Premium version, which came with a 6-month subscription. The retail cost of the boxed Premium FTM2014 was about $10 more than the cost of the sub, which seemed like a good value for software that had only a year of support left.

However, I understood from the beginning that if I try to import online- or FTM-exported GEDCOM into another program, it is going to take a lot of cleanup. Here are some resources:

Ancestry support pages for TreeSync (UPDATE Dec 2019 all links are dead; no copies found via the Wayback Machine):

I'm incorporating a link originally posted by @lkessler in a comment on the question. Louis' post What Ancestry’s “Retirement” of FTM Really Means on his Behold Genealogy blog included the links below to three posts from Tamura Jones' Modern Software Experience. In my opinion all four of these posts are worth reading, so I'm putting the links in this section to highlight them.

Ancestry.com announced that Family Tree Maker was retired on 8 Dec 2015. There has been A LOT of blog coverage and commentary, both serious and hysterical. Just google: "family tree maker" retired. It is still possible to purchase the program on software retailer sites (mentioned in some blog posts), but ancestry support will be limited.

Several alternative desktop software programs subsequently offered special deals for people wanting to transition to other software (Rootsmagic, Legacy, MyHeritage, and others). Ancestry has said they will consider working with other software providers to allow syncing with the online ancestry.com trees, something that is currently only possible with recent FTM versions.

As for the reasons behind the decision to retire FTM, Thomas MacEntee has an interesting post discussing the wider transition to subscription software instead of purchase and cloud-based storage rather than the local desktop, and how those trends apply to genealogy. It boils down to profit and control.

On February 1st, 2016 I had a conversation with a Ancestry.com representative and they said multiple software vendors are being worked with to provide access but could not name any of them at that time on each platform.

On February 2nd, 2016 Ancestry.com did send out the following statement stating at this time there are two immediately available replacement products from Software MacKeiv for and Roots Magic for PC and Mac (see note below).

Today, we are pleased to announce two options for desktop software that will work with Ancestry.

We have made an agreement with RootsMagic, a leading genealogy desktop software program publisher, to connect Ancestry with the RootsMagic software by the end of 2016. With this new relationship, RootsMagic can serve as your desktop family tree software, while having access to Ancestry hints, Ancestry searches, and the ability to save your tree on Ancestry. 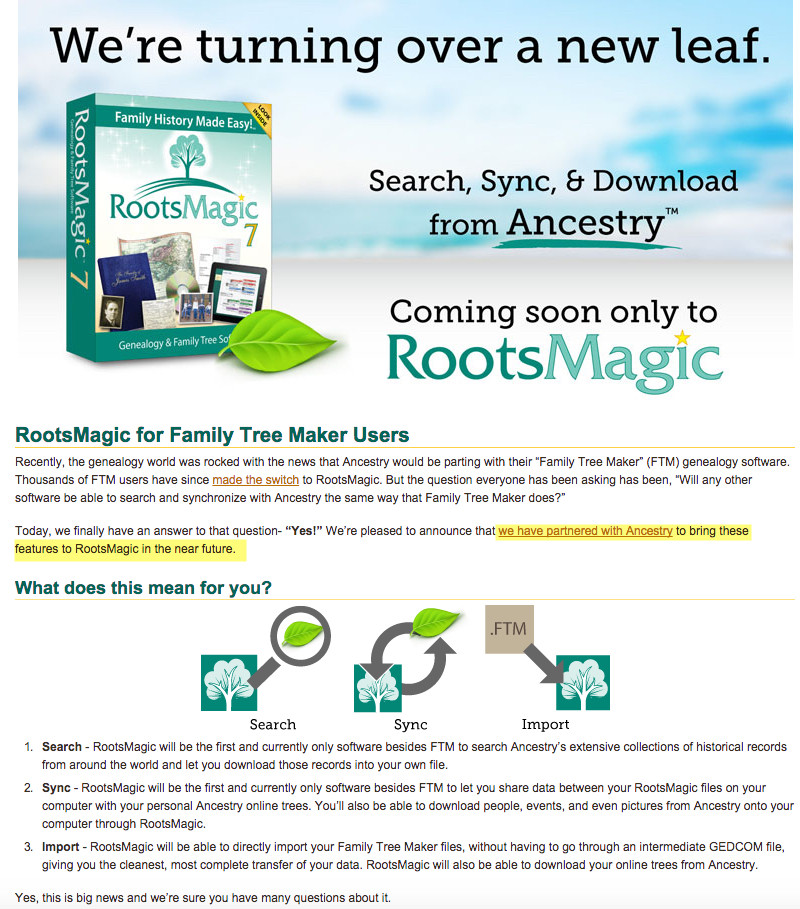 Important Note 1: The note on RootsMagic that it will bring these Ancestry.com Integration features in the 'near future'; sometime later in 2016 per their website and are NOT currently in RootsMagic7. Note 2: RootsMagic for Mac installs CrossOver/Wine to let the Windows program think it is in Windows and RootsMagic is not a native Mac application.

We have heard your concerns and are working to provide the solutions you requested. These new agreements will make it possible to preserve your work on Ancestry and Family Tree Maker and enable future features and benefits to help you discover your family history. Be assured that Ancestry, in cooperation with Software MacKiev and RootsMagic, will continue to support you as you discover your family history.

We ask for your patience as we work diligently through all the details to make these solutions available. You can find additional details about these Family Tree Maker partnerships on our blog. We also encourage you to continue to check back on our blog for future updates in the coming months.

I'd say that you should ask what it is you need your genealogy software to do. Then check the features on offer. If FTM matches your requirements, then by all means use it. I still see new copies of FTM on sale from time to time, and since Ancestry's announcement they are "cheap as chips".

Full disclosure: I'm still using Family Tree Maker 2010 as my main genealogy software, and it does everything that I need.

(I also have PAF 5.2 on the PC at home - which can be useful for particular tasks - and GedStar Pro on my mobile phone)

I prepaid for Family Tree Maker in May, that was suppose to come out this past summer. Here it is Christmas and I haven't received it. I paid for the CD and wanted to put it in 3 computers. Sue Davis

Not the answer you're looking for? Browse other questions tagged family-tree-maker or ask your own question.