Where is the Marriage of Milly Bungay/Mason/Weston to John Weston?

My 2x Great Grandmother was Milly Bungay(Bungay/Bungy/Bungey/Mason/Weston). She was born 28th August 1860 in Romsey, Hampshire, England. She died in 1945 which has been recently verified using the 1939 Register + Death Certificate(See sources) as she is living with her daughter Eleanor Kate Carter(nee Mason).

I have a few questions so I will be splitting this post into two sections, the other can be found here:

I have looked extensively but can't find any marriage record for Milly to the man she lived with, had two children and took his name later in life, John Weston.

My Question is: Can anyone find a record of Marriage between Milly Bungay/Mason and John Weston. 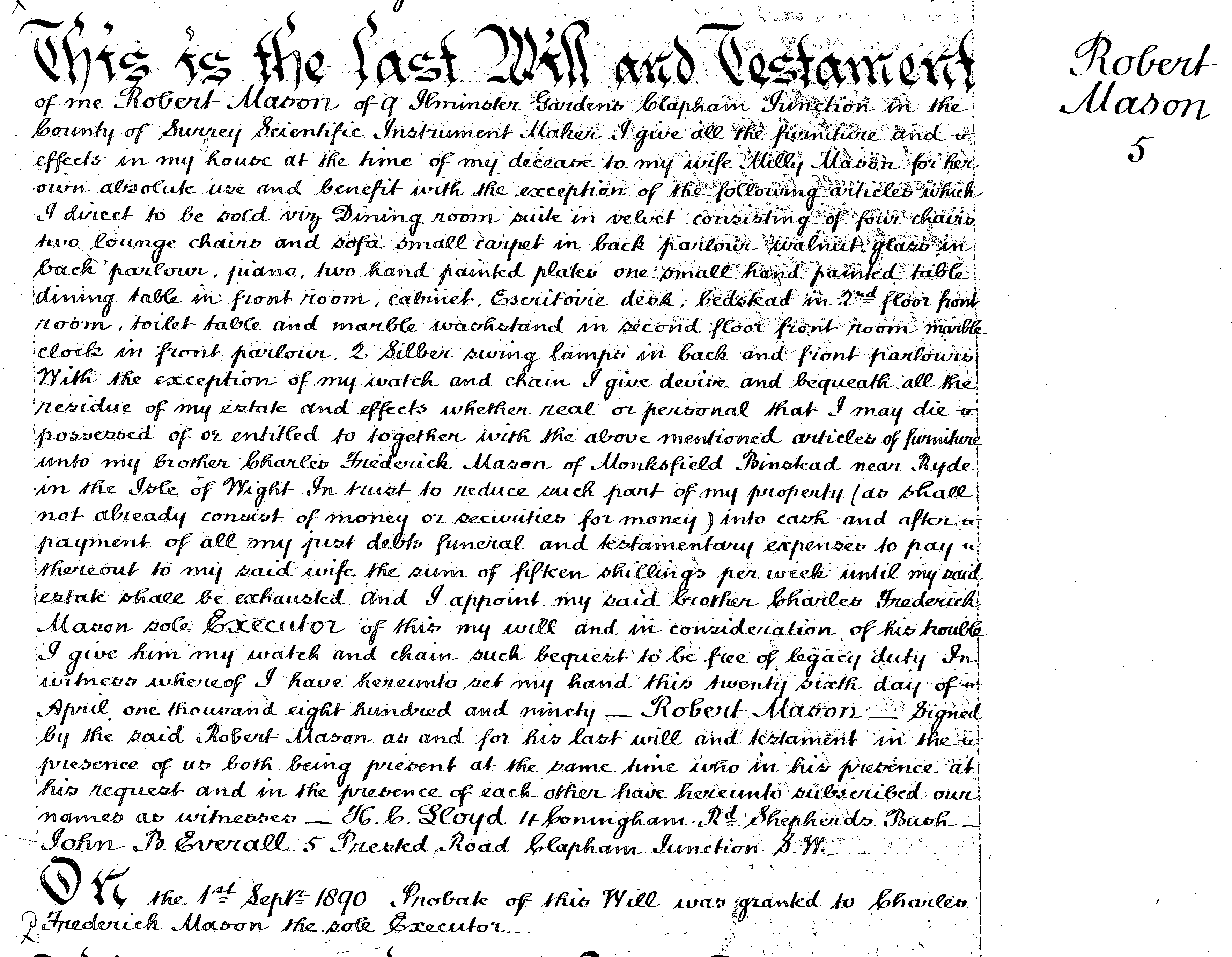 Robert H Mason's Will shown above

Examining the time of Milly's name change is key here, so I would start with a detailed timeline. You would do well to complete this timeline going back to Milly's birth, and forward to her death, but for the purposes of this question I have only constructed a timeline just for the period around when we expect her second marriage to have occurred. It is useful to include every document in which she is mentioned by name, or which she could possibly be mentioned by name (if you have not yet accessed or found a resource), even if she is not the primary person named in that document.

Although it repeats much of the information you included in the question, the relevant documents pertaining to Milly from 1890 to 1927 I could locate are:

From this I note that during the 1890s and early 1900s, Milly goes back and forth between being called Mason and Weston. The fact that both of her daughters (Florence and Eva) are indexed under the name Weston suggests that on their birth certificate she implied she was John Weston's wife. With illegitimate births on which the father is named, they are typically indexed under both the mother and father's surname, since birth certificates at that time did not have a place for specifying the child's surname. The registrar would not have investigated whether Milly and John were actually married. Civil registration was informant-driven and they would have been taken at their word.

What is clear is that Milly and John were not married prior to the 1901 census, because at that time although living together Milly and the children are recorded as Masons, and she was noted as a widow.

From Milly daughter's marriage in 1903 we can see clearly from her signature that she was calling herself Weston by that time, whether actually married to John Weston or not.

However, the fact that John Weston is describes as a widower on the 1911 census strongly suggests that they were not actually married at that time.

John probably died in Yorkshire in 1915 (see Deaths Mar qtr 1915: Weston, John, age 66, Doncaster, 9c/1178). The death certificate probably won't contain any reference to Milly, but it may be worth obtaining. Unfortunately it does not appear John left a will so there will be no clues there as to their relationship.

There are numerous reasons why you may not be able to find the marriage. The GRO marriage index is not perfect, and there many mistakes and omissions – see Michael Foster's A Comedy of Errors. If you knew a likely date and location I would suggest approaching the local register office to see if they could search their indexes for the marriage, but that seems difficult in this case as you don't know a likely date or location.

However, all this evidence leads me to believe that Milly and John were probably never married. It was perfectly legal for Milly to use John's surname as long as she was not attempting to defraud or commit a crime by doing so. While common-law marriage was not a legally valid form of marriage in England, many unmarried people lived together as husband and wife.

You are probably searching for a document that doesn't exist. But that's not to say you shouldn't keep looking.

Not the answer you're looking for? Browse other questions tagged england marriage-records london 1910s 1920s or ask your own question.

4
Where is the 1911 Census record relating to Milly Bungay/Mason/Weston?
3
Where is the marriage of F. M. Weston/Mason to a Goodman?

4
Could John Stacy who lived/married at London and later lived at Exmouth (Devon) have been baptized in 1759 at North Petherton (Somerset)?
5
What did a Scientific/Philosophical Instrument Maker do and what other sources might be worth looking at?
3
Where is the marriage of F. M. Weston/Mason to a Goodman?
4
Where is the 1911 Census record relating to Milly Bungay/Mason/Weston?
5
Was it common for parents to baptise a baby/child if they knew he was sickly and likely going to die soon?
2
Finding marriage location / records of parents in 1920s Blair Co, PA?
2
Finding FindMyPast Devon Marriage image indexed by FamilySearch?
7
Formulating a strategy to locate a marriage
10
Why would the ages on a 1877 Marriage Certificate be so wrong?