Finding details of where Polish soldier in German Army was living before Great War?

What I know so far from family sources: My great-grandfather August Masur was polish, and a soldier within the German Army. He surrender to French troops and was made prisoner. Likely he did this on purpose because he didn't want to fight for Germany, but that's a rumour. Very likely this happened at the start phase of the war, in the war of movement, before there was trenches.

He was prisoner in Brittany and was had very good detention conditions. When the war was over, he came to Switzerland and never returned home ever again.

What I figured out from How to find information on German soldiers from World War I and World War II? is that, even though he had an amazing number of namesakes in the German army, I found a card that very likely is his, because his birthdate is noted at the bottom.

Note that a namesake born on the same day is not to be excluded. However, the sheet referenced by this card mentions a prison transfer between two different Brittonian localities, which makes it even more likely that this is my great-grandfather's card. 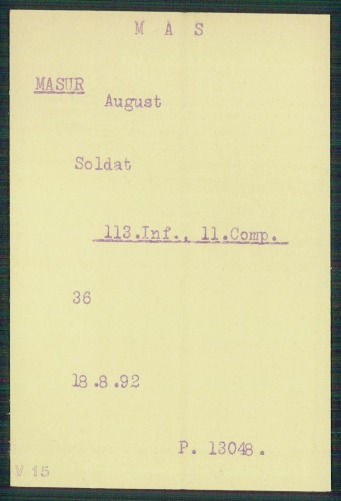 It appears I can find the regiment he was fighting for: 113th Infantry, 11th company.

I could not find a definitive entry for him in the list of losses (verlurslisten in German language). However, I found an entry that could be him on page 3446. His name and birthplace are severely misspelt (Massur instead of Masur, Schmitzach instead of Schmitsch), but the Company and Infantry numbers seem to match.

What is even stranger is that all the other solders in this page seems to be from Baden, the southwest region of Germany, the region closest to Switzerland, and not at all where he grew up.

Could it be that my great-grandfather was domiciled in that region before the war?

I still have no idea if the entry mentioned above is really him, I have no idea where he lived before the war (most definitely not at home anymore). I don't know why he didn't return home after the war, but instead came to Switzerland with his older brother.

The 113th infantry regiment was from Baden (Freiburg im Breisgau).

We can easily check more details online, as documents on soldiers fighting in the Baden military were not destroyed during WW II:

9
The terms "strafgefangener" and "arbaither"
14
Determining whether soldier in US Civil War was German mercenary?
8
Military draft in the Imperial German Army: What was the minimum age for being a "Gefreiter" in a reserve unit during WWI?
10
Tracing my Swiss German roots through to World War I an unknown fallen soldier
9
Finding vital records in Upper Silesia (Prussia/Germany)?
7
What are these abbreviations in a Verlustliste (zurueckgeh, krgef, A)?
6
Can this Verlustliste record be excluded or verified based on what (little) I know?