My Father passed away - next test(s) on what remains of his DNA sample?

I posted this general question over at the forum on FamilyTreeDNA. Though I received a reply, there is still no answer to my question, so I thought I'd try my luck at posting here.

Anyhow, in early 2009 I bought two kits for the Genographic Project and dutifully had my father do his cheek swabs: one kit for his Y-Chromosome, and one for his mtDNA. Once that was completed, I had his samples transferred to Family Tree DNA.

Then, late in 2009 I paid to have an mtFullSequence done on his mtDNA sample.

My father passed away in 2015. In early 2016, I phoned FTNDA to discuss. The first thing they did was arrange to merge his two original samples into one kit. Then, they suggested doing Family Finder. I did that and recently obtained the interesting results.

So, all told what I have done on my father is:

My father's Y Haplogroup is R-M269 and I am being presented with the M343 SNP pack on FTNDA.

My question is, what now? My father is gone so the sample that remains with FTDNA is old and finite (their customer service says they still have "one container" of his DNA). His siblings have all passed away -- unfortunately, with no samples taken. What is the best way to make use of the sample of my father's DNA that is left?

Should I refine the Y-Chromosome to Y-111? That seems the most natural (though I'm a male and carry it too). Should any SNP tests best be done on his remaining sample as opposed to on me? Or, should I do nothing and just let his 2009 samples continue to sit at FTDNA?

By phone, FTDNA said that they should have enough left to do the Y-111 and a SNP pack which is great, but I'd love to know independent of their customer service if that is the wisest way to make use of the remaining DNA sample which they have?

Full disclosure: I did have my father do 23andMe in 2010 and I did have his blood drawn and sent to a DNA Bank. I hope to never touch his banked DNA (except maybe to do a full sequence someday), but at least it does exist. My question now is solely how to best make use of my father's remaining sample at Family Tree DNA?

The short answer is being you have completed a very basic Y test and you should have met ftDNA's internal requirements of first doing a Y-## test before being able to order a BigY test and even if your kit does not show it, call them and they will add it to your cart or send you a special checkout URL.If they insist on adding a Y test you can request they batch the BigY first then do a Y-STR test (Y-111 for example) in a separate subsequent batch. This should ensure your sample is used first for BigY and not used up by the Y111.

Other things to note is being you have done a 23andMe.com test (as well as the Geneographic project to a degree), you have already done the most comprehensive Autosomal DNA test currently on the market.. download it and transfer it to ftDNA under your Y-12 kit as well as GEDMatch.. there is no reason to do another one and use part of your sample to get a autosomal test (what a Family Finder is).

The FamilyTreeDNA SNP pack is not available for all Haplogroups and I have only done it once and now go straight for the BigY as you get all of the SNP in those packs tested, then A LOT more. Being you also have already completed a Geneographic project, you will actually be re-testing for some of the same SNPs in those SNP packs that were part of the Geneographic project.

Per ftDNA's own FAQ the BigY is used for research purposes to detect both known and discover SNPs which can be used to establish new Haplogroups.

"Big Y is able to detect new branch markers that are unique to your paternal lineage" ... >SNP packs and "Geno 2.0 is microarray chip based and programmed for specific SNPs. Big Y is a next-generation sequence-based test." .. though "Due to the exploratory nature of Big Y, we cannot guarantee results for specific, known SNPs because results will vary from sample to sample"..

On the later point of the FAQ my detected SNPs that ftDNA displays in the results detail page did vary slightly in what is sequentially detected vs. going and looking for specific SNPs between myself and my grandfather on BigY (we are also a member of R-M269) but we both got grouped into the same granular sub-clad of the Y-tree on ftDNA and when uploaded to Y-Full were grouped into a new ever much more granular subclad based on our unique SNPs we both had uniquely detected.

To see the SNPs detected and already found on your father's kit click on the Download SNPs as CSV link:

My SNPs for example contained a total of 570 SNPs with the combined Geneographic and BigY results; my grandfather who only did the BigY contains 261. The full BAM file (over 600 megs) when uploaded to Yfull though shows greater overall coverage as well as accounts for some of the difference based on quality of sample and what was detected.

The SNP packs are changing over time to be better but for some they may be too high level (especially if you are only being offered the high level M343 pack) for many Y-tree branches in my opinion as it only tests ~100-160 total SNPs (depending on the specific pack offered) vs. potentially thousands that may be detected via the Big-Y which the odds are will detect those same SNPs as the pack. 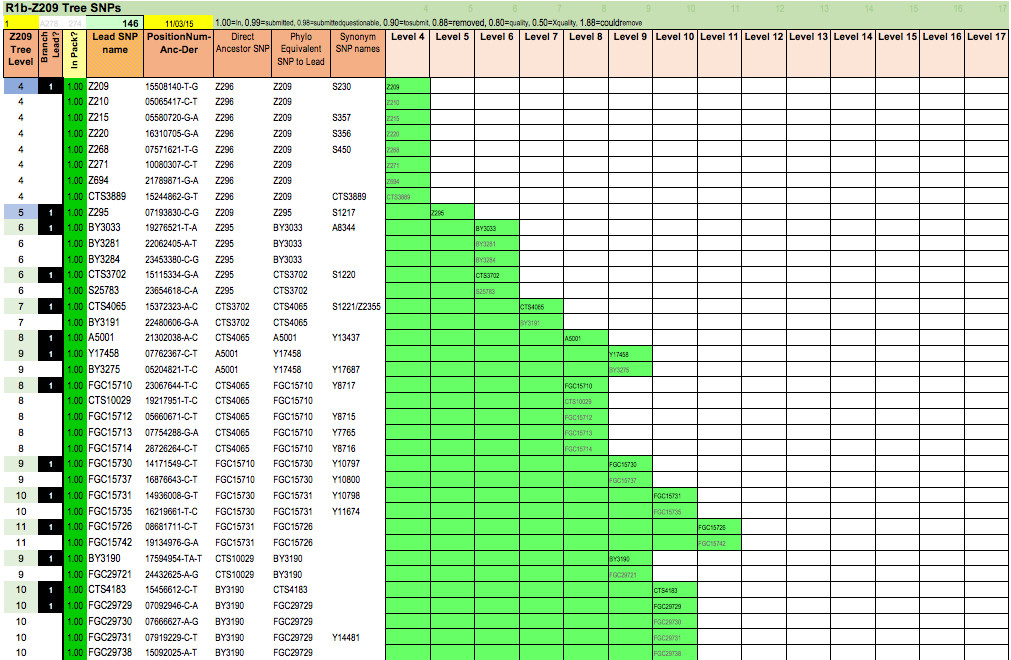 I have found through doing several BigYs sometimes the SNP packs would not have provided any additional insight that the BigY brought and through people doing BigY they are able to further refine the SNP packs.

The SNP packs may also only take you about 2 additional Haplogroups deeper into the Y-Tree in most test cases.. the BigY should take you 4-6 layers deeper into the Y-tree once uploaded to Yfull. If the Geneographic test had provided you a more granular / specific R-M269 subclad than simply R-M269 then maybe a a specific SNP pack makes more sense logically and economically if you do not care about developing the tree as the FamilyTreeDNA SNP packs are about $120, the BigY is about $525 unless you find a coupon which can get it down to about $425.

I am all for developing the YTree and seeing more specific results / information develop over time so even at almost four times the price I personally would absolutely go with the BigY... something today's version of the SNP pack may not give you.

Y-111 classified me as M269, Geneographic Project classified me as CTS-12078, BigY classified me as R-Z278 / CTS12078. The BigY and the Geneographic project both the same subclad, but my my grandfather did not do a Geneographic sample and we ended up in the same place and both further got grouped into the more granular sub-clad on YFull. YFull classified us as R-Y19146 under R-Z278. In other cases of the many kits I have taken there were so many new SNPs both present and/or missing the BigY classification on ftDNA did not change / or it confused their mapping and uploading it to YFull was the only way I got more information.

So most importantly you can download the full results of a BigY and upload them to YFull.com for further analysis and breakdown, share with ftDNA's own study, and other similar sites like BigTree. YFull will give you a significantly more comprehensive analysis of the results both in terms of the current Y-Tree Haplogroup (ftDNA is at least a year behind in updating their Y-tree) as well as a better and more meaningful matching tool than ftDNAs for only an additional one time $49 which I have found well to be worth it.

FamilyTreeDNA may use up the entire remaining sample for a Big-Y as I am told it requires sometimes a large portion of a sample as it is the most comprehensive test FamilyTreeDNA performs as of February 2016. I have also had them send out additional kits for people who didn't provide a good enough sample in both tubes.. but even if incomplete you should be able to get at least a partial BigY. If you have sample remaining I would only then do a Y-111, and not bother with any other Y-67/Y37/Y25.. as below Y-67 it is really not effective for genealogy purposes.

Kudos on getting a draw of your father for a full sequence, I recently looking into the costs of having this done and it is still in the ~$2000 range for their entry level test and offering some sub-$2k on FullGenomes.com but their 100x test is now only $5500 and will likely continue to drop. I am not sure how much it is costing to bank the DNA sample (last I looked it was like $300-$500 a year with some services).. but at some point in the next few years the price will probably reach a more economical rate which serious enthusiasts can afford.

Lastly, the thing to keep in mind is that BigY is still very new and matching tools for the test are still very early and the number of people that have tested for it are still very limited with counts probably only in the thousands vs. the millions like the Autosomal test.

So the BigY may not have the immediate gratification of a test like the Autosomal (which you have) and a Y-111 which matches to close matches.. if you have one. Though you can also do the Y-111 or BigY yourself and have 'similar' results..but the difference is that if the sample provided is not good enough you can always provide another one and your Y-111 STR results should be no more than one marker off than your fathers.

So if you are looking for a 1-shot test I would focus on the Big-Y as it will give you the most long term gain, but perhaps not necessarily in the short term.

Not the answer you're looking for? Browse other questions tagged dna autosomal-dna y-dna mitochondrial-dna familytreedna.com or ask your own question.

3
How to get permission and best order to upgrade DNA testing for deceased person?
5
How to understand differences in paternal haplogroups from different companies?

8
What factors should I consider when choosing a DNA-testing service?
11
Generational Loss of Data with DNA Testing
2
Finding my Great-Grandfather when DNA test not conclusive?
7
Making Research Plans for studying the Genetic Genealogy of an Adoptee?
3
How to get permission and best order to upgrade DNA testing for deceased person?
5
Y-DNA STR Testing - Zero Matches?
3
Finding paternal family using DNA?
3
mtDNA Match Discrepancy
1
Half Siblings not showing up as DNA matches?