Is it possible to inherit the physical look of one ancestor specifically?

My family and I are Swiss, but my dad has a very Mediterranean look.

His skin tends to be copper-coloured, he has very dark and very curly hair. This is especially obvious in photographs where he was little, he really looks like a foreign guy, and is very obviously different to other kids physically (back then when there was few immigrants here).

My brother and I also inherited some of his physical properties, but to an lesser extent. We also tend to be slightly darker skinned, darker haired, and curlier than most people in our country. Not so long ago someone was sure that I was Greek just because of how I look.

However, my dad only has Swiss, Austrian and Polish documented ancestry, with the exception of one of his great-great-grandmothers which came from the region of Bearn in southern France.

But however my father is only 1/16th Bearnais, which normally should not matter all that much when it comes to his physical appearance.

Hence my question: Is it possible that only one remote ancestor specifically determines your look significantly more than the proportion of his DNA (1/16 in that case)?

This is independent of distance from an ancestor but more the SNPs that one carries in their DNA. Though to do a direct comparison you would need a test from both individuals.

So while your exact question at face value is fairly relative in nature it does have a few valid merits that can be specifically answered.

The starting point for this would be to have an Autosomal DNA test done with one of the major services (FamilyTreeDNA.com, 23andMe.com, or Ancestry.com) which range in price from $89 to $200 and all test similar number of SNPs and you could further supplement that if male by getting a Y-SNP test through FamilyTreeDNA to build a larger list of SNPs.

To know what attributes you received from your father you would test both yourself and your father and compare the results on the different sites.

If you are only interested in a simple most bang for the buck low cost DNA testing the general recommendation is to test on Ancestry.com, then transfer to GEDMatch.com for free, and transfer to FamilyTreeDNA.com for $40. If you are interested in building a more comprehensive DNA profile of yourself you can get all testing done on FamilyTreeDNA.com with a single test kit.

The free GEDMatch.com then can utilize the results of the Autosomal DNA test to predict your expected Eye Color and Attributes as well as has a wide selection of ethnic admixture tools that are generally more granular than offered by any of the other services. (Note: The EyeColor prediction was incorrect for me but correct for other kits I manage) 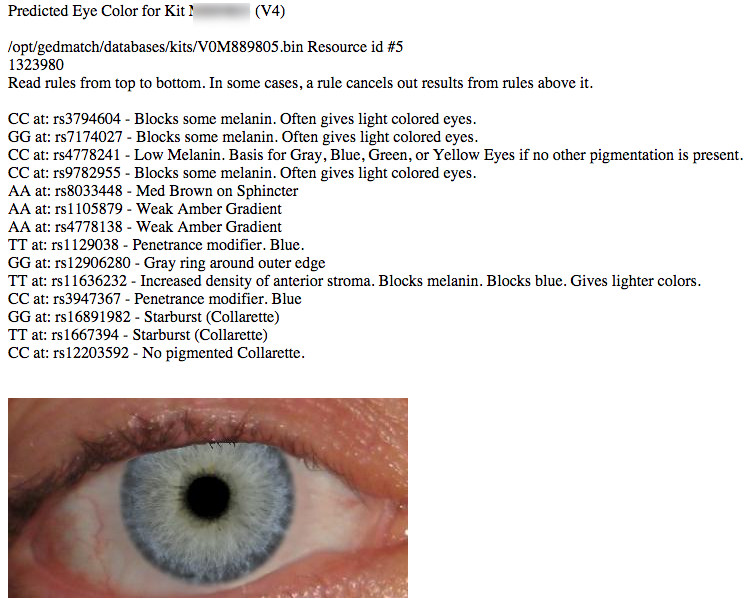 You can then also upload those results to Promethease.com where for $5-$7 you an have your SNP results analyzed and based on the most recent studies have it tell you what it expects based on the SNPs your genetics are carrying it expects you to look like.

The Promethease report covers many other items in addition to appearance, but in the appearance category I know covers PROBABILITY of attributes like:

As far as I understand it, and I am not a biologist, yes traits can "skip" generations and turn up in later generations.

A popular example is eye colour. Blue eyes are the result of recessive genes, where both your parents must have carried this gene. Because it is recessive, the may carry the gene even if they have brown eyes.

Let’s call the recessive blue gene b, and the dominant brown gene B. Now, both parents may have bB-genes. This would give them brown eyes.

Assuming an even distribution of DNA between 4 children, these children would have these genes: BB Bb bB and bb. So 3 of them would have brown eyes, but the forth, with 2 recessive blue genes would have blue eyes.

So that's one way you could inherit your grandfathers traits, even if none of your parents seem to have them.

At least that's how I understand it. :-)

4
Is it possible to fall below the lowest amount of shared cMs for a half first cousin and still be a half first cousin?
3
Strange results on DNA Test
1
Is it possible for DNA from two male cousins to appear to have the same father in the sibling test?
2
Confirming possible half sibling from AncestryDNA?
3
What are the chances of having autosomal DNA from an ancestor N generations back?