Reading words on old document relating to share of Will?

I was just given this old document by my grandmother. It is a document relating to a share of a Will in which her grandmother was mentioned (Emily Pynn nee Hughes). There are a few words I cannot make out which I have highlighted in Bold. I've had to cut it down to 2MB in size to be able to upload it. I have a much higher resolution scan if needed which I can send upon request.

I should also mention that the name Hunstad is mentioned on another document relating to a different will. Although that is a transcription so it could well be Hanstad.

What is the full transcription of this document? 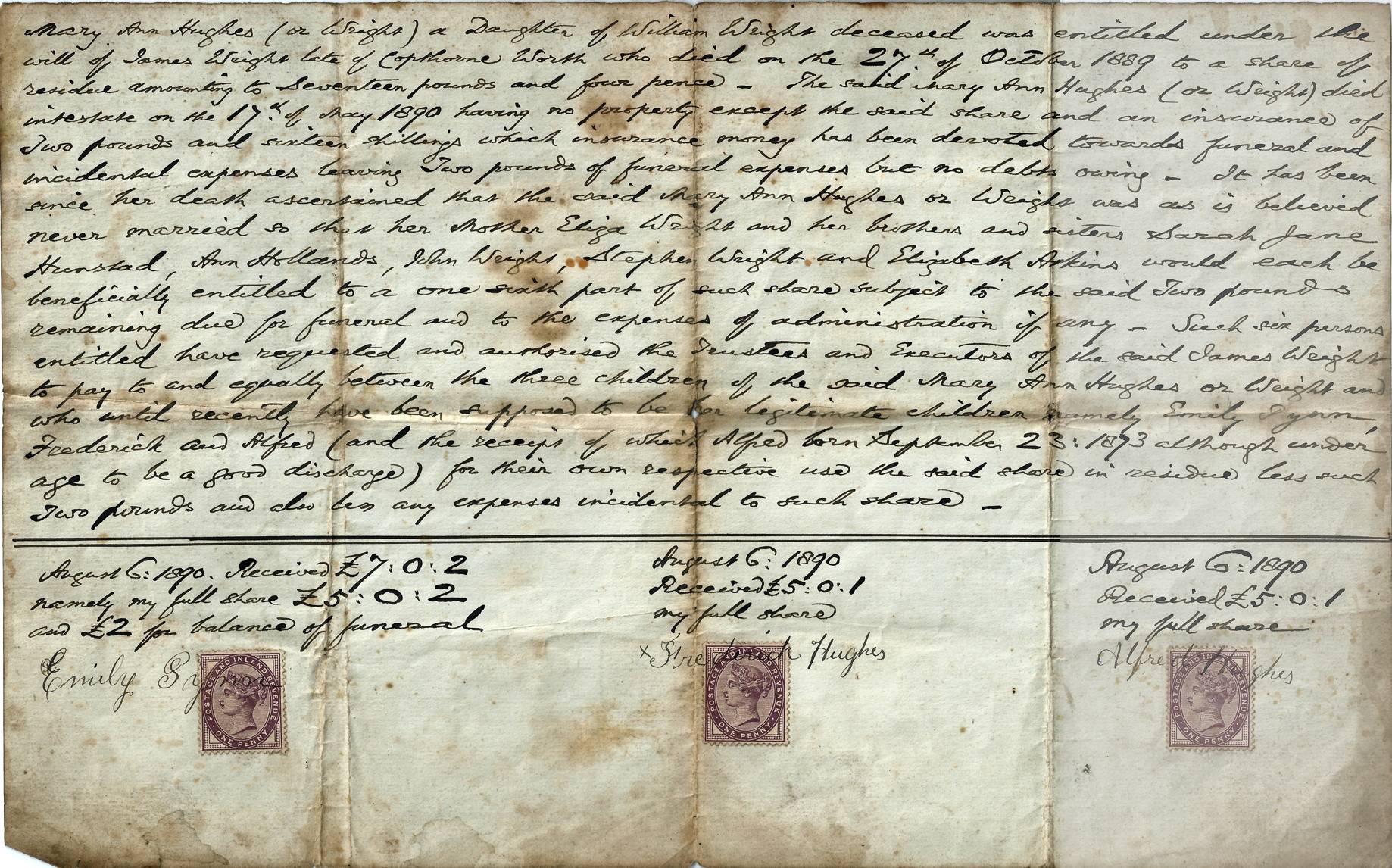 My Transcription is as follows:

Mary Ann Hughes (or Wright) a daughter of William Wright deceased was entitled under the will of James Wright late of Copthorne Worth who died on the 27th of October 1889 to a share of residue amounting to seventeen pounds and four pence – The said Mary Ann Hughes (or Wright) died intestate on the 17th of May 1890 having no property except the said share and an inscorance of Two pounds and Sixteen shillings which insurance money has been devoted towards funeral and incidental expenses leaving Two Pounds of funeral expenses but no debts owing – It has been since her death ascertained that the said Mary Ann Hughes or Wright was as is believed never married so that her mother Eliza Wright and her brothers and sisters: Sarah Jane Hunstad, Ann Hollands, John Wright, Stephen Wright and Elizabeth Atkins would each be beneficially entitled to one sixth part of such share subject to the said Two pounds remaining due for funeral and to the expenses of administration if any – Such six persons entitled have requested and authorised the trustees and executors of the said James Wright to pay to and equally between the three children of the said Mary Ann Hughes or Wright and who until recently have been supposed to be her legitimate children namely: Emily Pynn, Frederick and Alfred (and the ??? of which Alfred born September 23 1873 although under age to be a good discharge) for their own subjective use the said share in residue less such Two pounds and also for any expenses incidental to such share –

...the said share and an insurance of Two pounds and Sixteen shillings...

I agree with the other bolded words.

7
Were British Army families stationed overseas enumerated in any Census returns?
5
Where to find Will of Giles Chichester from 1820s, probably in Somerset or Guyana?
3
Were nephews and nieces sometimes referred to as cousins in 18th century Cornish wills?
5
Identifying difficult words in 1651 will?
1
How to interpret hand written will that refers to children and possibly in-laws?
4
Best practices for producing document abstracts or summaries?
9
How were the beneficiaries of the 1872 Will of Mary Rogers related?
5
Private baptism in one church followed by baptism in another?
3
Widow's probate in 18th century US?
2
Strange Probate record: Could this death record not be correct?