Does Ancestry.com have a developer API?

Other sites provide their own APIs for this: e.g. MyHerigate has the Family Graph API http://www.familygraph.com/.

I can't find any indication that such an API exists on the Ancestry web site, but there is at least one site that seems to make use of such API: myCanvas.com.

So it seems the API exists, but maybe it's private?

Does Ancestry.com have a developer API? And if so, how can I get access to it?

The Ancestry blog posting "External APIs: To Explode, or Not to Explode, That is the Question" in 2014 says that there is an external API:

Ancestry.com (the bastion of family history) has an external API that is used by our mobile apps and other strategic initiatives to share and update a person’s family tree, events, stories and photos. Our external API has been most important in our mobile efforts (11 million downloads) and in working with the popular TV series, “Who Do You Think You Are?”

but it appears not to be available to developers, a point reinforced by a Community Moderator on the Ancestry forums in 2013 responding to "Does Ancestry.com offer an API for developers?":

The answer is no. Ancestry does not provide an API for developers.

A 2010 posting on Genealogy APIs by Tamura Jones said that:

There is some API between Family Tree Maker and Ancestry.com, and some years ago Ancestry.com said they would publish it, but they still have not done so.

Yes, Ancestry has an API.

No, it is not public. Ancestry so far is making it available to only a select few.

On December 9, 2015, Ancestry stated that they are "exploring possible relationships with other desktop software solutions that would make it possible for their products to integrate with Ancestry". So other software may get access to the API in the future. This does indicate that Ancestry wants to retain control on who gets access to the API and how it is used.

On February 2, 2016, Ancestry announced that they will make it available to Software MacKiev, the company that acquired Family Tree Maker from Ancestry, as well as to RootsMagic, to connect to Ancestry by the end of 2016.

Interestingly, I should point out this page at api.ancestry.com: 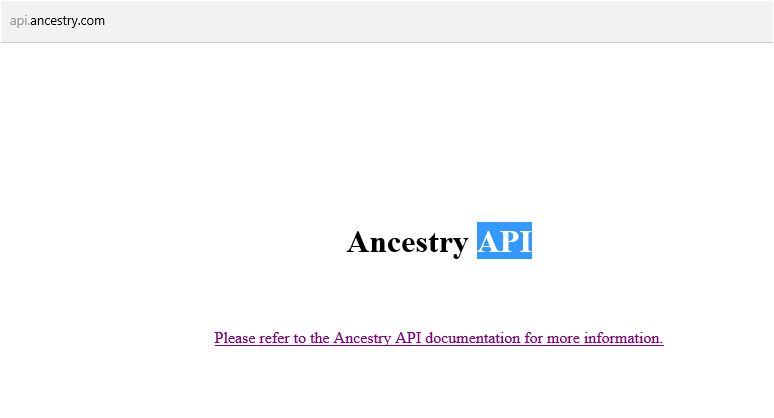 ... but there's nothing there.

When I was debugging a login problem with Family Tree Maker I could see that it was calling a .Net WCF web service. At the time it was possible to just tack ?wsdl on the end of the URL and get a full service definition.

So you could do this if you had a subscription but I imagine they'll stop you if they find out.

Not the answer you're looking for? Browse other questions tagged ancestry.com or ask your own question.