On the 1855 NY Census, one of my relatives (Mary Whitney) has a birthplace noted as "Map". According to the instructions on the census form, that field contains one of the following:

There are three NY counties that begin with "M" - Madison, Monroe and Montgomery. I can't think of a state that might be abbreviated as "Map", nor a country. I thought it might be a census abbreviation, but I haven't been able to find anything. I found another entry with "Unknown" entered, so it doesn't mean that. And it wasn't just Mary. I found an entire family in that census who had "Map" listed for their birthplaces.

Any ideas about what "Map" means?

It appears the "p" is really a long s, which would be commonly used for a double s, making "Map" really "Mass". However, how does that explain this entry with both "Map" and "Mass"? 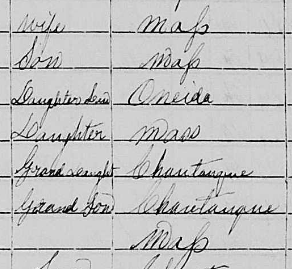 Historically, the letter "s" was often written more like a tall, looped "f", and a double "s" could look like "fs", or "p" if close together. So I'd guess this is "Mass", i.e. Massachusetts.

It's referred to as the "long s" (Wikipedia).

Not the answer you're looking for? Browse other questions tagged united-states census-records palaeography new-york-state 1850s or ask your own question.

6
Finding New York City/State records relating to Sellars family (British subjects) births/deaths mid 19th century?
8
Old German script. What is the wife's name in this 1837 baptismal ledger from Stark County, Ohio?
10
Transients and New Arrivals in the U.S. 1940 census
2
Finding Naturalization Record for Hugh Sellars from Scotland who lived in Albany (New York State) 1855-1872?
5
What churches in/near Ward 6, Albany, New York State might have baptized Scottish baby in 1854?
3
Interpreting relationships to head of household in 1855 New York State Census?
4
Finding record of Peter J Starrs in USA prior to 1870 Census?
4
Meaning of "In Whose Lot Interred: Hugh Sellars" at Menands (Albany Rural Cemetery) in 1872?
1
Reading place-names in 1906 Denmark Census image?
3
What is the house number on this 1891 Census record?