With DNA information from FamilyTreeDNA, I have determined trangulation groups. I have chromosome segments of significant size (> 10 cM) over which A (myself) matches B (my known cousin) and A (myself) matches C (some third parties) and I've found out from my cousin that B matches all the C's as well over the entire segment.

This 3-way triangulation is considered extremely reliable and all the third party matches will almost assuredly be related to me and my cousin's MRCA (Most Recent Common Ancestors) and/or some of their ancestors.

I've assigned these matched chromosome segments in my DNA to have originated from my and my cousin's common ancestors.

Is there an explanation for this?

To make this clearer, here is a concrete example.

The yellow line with the green X's near the top is my uncle's match on Chromosome 1 with my known third cousin, we'll call Joel. The green X's on that line is the segment where my uncle matches Joel.

(The pink and blue areas are where that person only matches my uncle, or only matches Joel, but that's really not relevant for this question).

But since we have a segment between 170876383 and 183564808 on chromosome 1 for each of the 29 people who match both my uncle and Joel somewhere on that range, then that is three way triangulation (A matches B, B matches C, and C matches A) and that means that all 29 people are pretty well guaranteed to have a common ancestor who is either my uncle and Joel's common ancestor, or an ancestor further back.

I thought that once this Triangulation segment is arrived at, then anyone else who matches either my uncle or Joel anywhere on the green area must also be in this group with a common ancestor.

But then I found these people, each of whom were only in one of the match files: 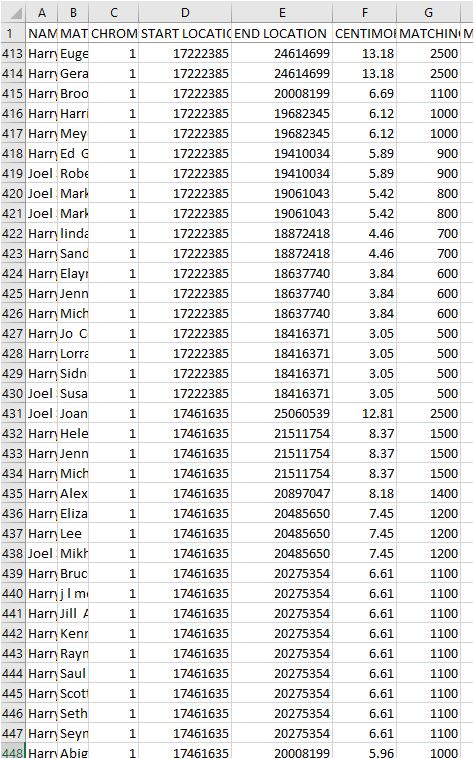 Each of those people are in only one match list, either Harry's or Joel's. Some of the segment lengths are quite significant, and it's unlikely the 13.18 and 12.81 cM segments are not IBD.

So I am confused as to how this can be and I'm looking for possible explanations.

I'm by no means an expert on genealogical DNA (I probably know less about it than you do). I do seem to spend a lot of time looking at aspects of it that make no sense, though.

That said, I'm going to go Holmesian here re: the impossible and the highly improbable. My guess is that you're looking at half-IBD matches here - your uncle and Joel, and the 3rd parties that match both, are all matching on one half of the chromosome 1 pair, and the others are matching either Joel or your uncle on the other half.

I know it seems unlikely that there would be matches within the same segment range on two halves of the same pair, but the alternative (that DNA segment matches aren't transitive) seems impossible.

I've seen similar phenomena in my own matches, where I've mapped a particular segment to a particular ancestor via triangulation. Then, I've seen what appears to be a match of an overlapping section of the same segment to someone with whom I provably have no "recent" (DNA timeframe) common ancestors.

Of course, if you're dealing with more than one matching segment here, then forget everything I just suggested.

Found another reason. These people only have enough total cM matching with Harry and Joel to be considered a match to just one of them.

Yes, they do triangulate on this segment with both Harry and Joel, but this may be the only segment, or one of just a few, that matches to one of them. And only people considered to be matches have their segments included in the segment match file.

Not the answer you're looking for? Browse other questions tagged dna triangulation or ask your own question.

6
What is FTDNA's Chromosome Browser showing for the X chromosome?
5
Why are the lengths GEDmatch.com Chromosome Segment Matching segments not proportional to their cM?
4
What explains sharing a 28.6 cM DNA segment with a sixth cousin?
8
Interpreting DNA matches from endogamous communities?
4
DNA Sticky segments
2
How to filter and sort MyHeritage DNA matches?
5
Segments with no matches
6
When triangulation is not transitive