This question is related to an earlier one (Where to find Will of Giles Chichester from 1820s, probably in Somerset or Guyana?) and more generally to the time that three (possibly four) brothers of my direct ancestors Priscilla (3rd great grandmother) and Robert Chichester (4th great grandfather) spent in Demerara (now Guyana) during the early 19th century.

My current interest is in seeing whether researching Yorkshire Hall plantation might shed some light:

DEMERARA AND ESSEQUIBO VADE-MECUM. A. Stevenson, at the Guiana Chronicle Office, 1825 - 311 pages.

The West Yorkshire Archives Service office at Bradford Library holds the will of Mary Skelton "late of Little Horton". In 1823 she leaves her "three fourth part share" of the Yorkshire Hall plantation in Demerara to her three sons including "all the negroes and slaves which may, at the time of my decease, be resident or belong to the said plantation." http://www.bbc.co.uk/bradford/content/articles/2007/02/26/slavery_west_yorkshire_feature.shtml

I have a suspicion that Jared's elder brother Giles (who died before 1830) may have been Jared's predecessor at Yorkshire Hall and to try and eliminate this from my thinking (if it is not correct) I am hoping to trace the owners/managers of Yorkshire Hall from 1823 through until about 1840.

I suspect that the papers below could be helpful, but it appears that they will be expensive to access from Australia:

Held by: The National Archives, Kew

Are there any more accessible records of the owners/managers/proprietors of Yorkshire Hall Plantation in Demerara (present day Guyana) that I might be able to use to trace its ownership/management from about 1823 to about 1840?

Not a direct answer but may provide you with additional leads.

There are numerous references to "Yorkshire Hall" and William Chichester (as chichester, chionester, and chishester) at this website: vc.id.au (Van Cooten Voices), in the Guyana Colonial Newspapers section

The best method for searching the site is to use Google's site search, for instance:

I found Jared's will at the National Archives, but no other relevant Chichesters to your query.

One of the other UCL pages notes that in 1826 Yorkshire Hall was: "In lawful possession of Thomas Skelton by his attorney William Chichester". That suggests to me that William did not (then) own plantations, but was heavily involved in their management. He may later have acquired the land from the Skeltons, as Jared does appear to be an owner.

Additionally, this Google Books result from The London Gazette includes the "east half" of Yorkshire-hall in the legacy of Benjamin James Hopkinson in December 1839. 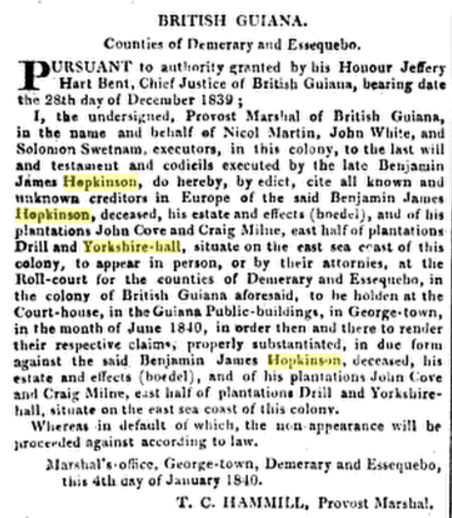 If Mary Skelton left "three fourths" of Yorkshire Hall, two of those quarter shares presumably merged to form Hopkinson's half. He may have been the owner of the fourth quarter that Mary Skelton did not hold, or could have acquired two of the Skelton portions.

Given that William Chichester's page at UCL states that he was "one of the executors of John Hopkinson" in 1822, it looks like the Chichester, Skelton and Hopkinson families were quite closely intertwined in Guiana.

Browsing the UCL pages, it looks like the Hopkinson family was large, had part-shares in many estates, and the horde of descendants tended to squabble over inheritances. This means there may be some complex ownership webs to unravel, but thankfully Yorkshire Hall doesn't appear to be involved in that mess.

I think you need to find out what the Skeltons have in their closet as they have the clearest chain of ownership here. I would also try to discover the maiden name of Jared's wife Maria Dorothea - if she were a Skelton or Hopkinson, for example, Jared could have inherited the plantation by marriage rather than from William.

It might also be worth pursuing the "Dormant Funds in Court (Chancery)" of Middleton vs Chichester which appears to concern the estates of Maria Dorothea Chichester and Jared Chichester. Given that you have Middletons related to Chichesters, I would make a guess that Jared and Maria had no heirs, so Jane, Jared's sister, sought to inherit. As this case was opened in 1872, but was "dormant" in 1911, I wonder if Jane died before closure.

5
Where to find Will of Giles Chichester from 1820s, probably in Somerset or Guyana?
1
Proving Jane Middleton of Somerset only Next of Kin in 1872 to Thomas Chichester who died 1838 in Guyana?

6
What Island is likely to be mentioned on 19th Century Somerset Will?
5
Where to find Will of Giles Chichester from 1820s, probably in Somerset or Guyana?
1
Proving Jane Middleton of Somerset only Next of Kin in 1872 to Thomas Chichester who died 1838 in Guyana?
0
Finding where US citizen owned land and/or was registered to vote in 1855?
4
Finding birth/baptism record for James Chichester who died 1858 in British Guiana?
4
Identifying Robert Chichester listed amongst British Guiana Colonists?
2
Did Richard Hill and Blanche Todd live in India in the late 19th Century?
1
Finding parents for James Henry Posey who was born in Maryland 1831?
3
Finding out if ancestor owned land they lived on in England