Where is John Knight of Henry Kentucky in 1840 census? 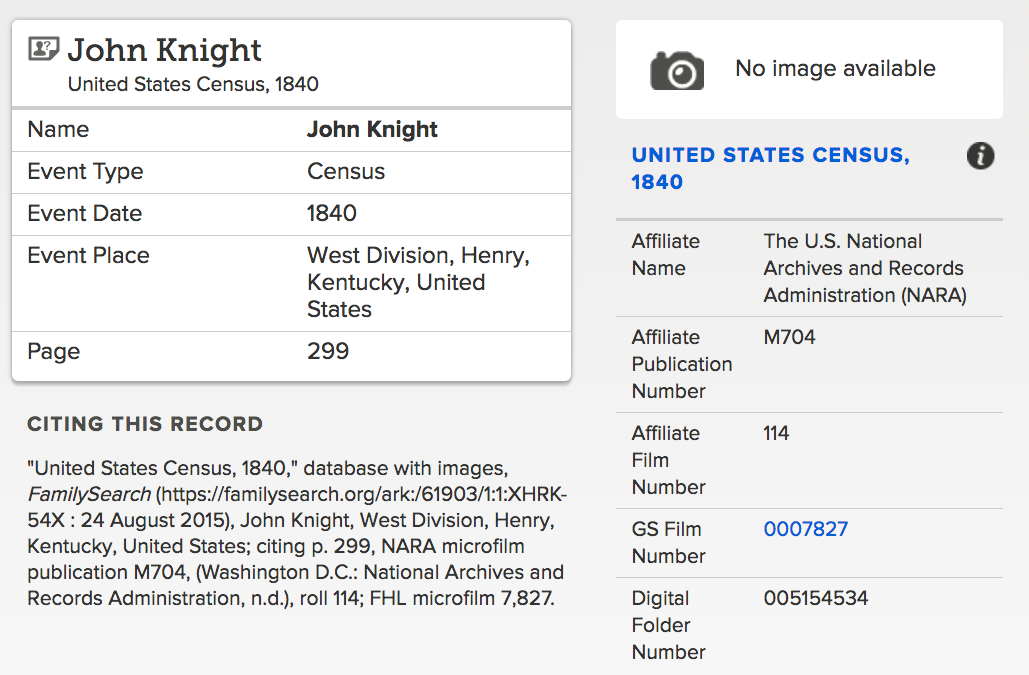 Why is he in the index, but there is no image. Page 299 is page 28 of 33 at Family Search and is the last page of 32 images shown on Ancestry and is right hand side of two page spread with names on left page. I searched the left page and see no John Knight.

Where can I find his record? Why would it be in index but missing from images?

Many NARA microfilm publications have a descriptive pamphlet which describes the microfilm and explains how it is arranged. These publications sometimes say when pages have been lost (similar to the Known Issues articles at FamilySearch. I have not been able to find such a description of the records from NARA yet, but I will link to it if I can find one. (The DPs are often reproduced as the first images on the microfilm rolls.)

There may be some information about missing records in Chapter 1 of NARA's Guide to Genealogical Research in the National Archives; in the section Useful Publications, the online research guide 1790-1890 Federal Population Censuses - Part 1 says:

Details on many of these records appear in Guide to Genealogical Research in the National Archives, chapter 1. Table 4 of the Guide (pp. 14-16) identifies most of the microfilm publications for the mortality schedules; section 1.3 of chapter 1 (pp. 28-38) discusses each state's special census schedules and problems.

Stephen P. Morse's One-Step Web pages has a Description of US Census Microfilm Rolls, 1790-1940 and the list for Kentucky includes this entry:

A DP or roll list from NARA might say if the counties are on the roll in alphabetical order.

If you want to try browsing all the images for roll 114 of M704, you can view the Allen County Public Library's copy for free at the Internet Archive. Stephen P. Morse's site also has a feature which allows you to browse the individual rolls.

FamilySearch's index was provided to them by Ancestry. So what I would like to know is who provided that index to Ancestry?

MyHeritage Library Edition appears to have the same issue. Here is their page for the same record as the one you found on FamilySearch:

It is the only hit on the first page of the search results for John Knight in Kentucky that does not have an image.

By contrast, a search for John Knight with name variants checked at findmypast, which has the US Census collection for free (it was formerly free at Mocavo, which was purchased by findmypast), shows 7 results, none of whom appear to be from Henry County. Their search results page says:

(I haven't clicked through to view the images, so I haven't confirmed that the images belong to the counties cited in the search results.)

If you click on the little i to the right of the 1840 census title it leads you to the wiki page about the census. Down that page is a section, United States Census, 1840 known issues which refers to an article which says :

Some records are missing.

It then lists some options for you to try to access the information,

Most missing records are available on microfilm.

and gives links on how to proceed from there. Looks like you may have to find original microfilm in a family history center...

I looked all though the Records for Kentucky in the 1840 Census. Five John Knights, but none of them from that county. So, I think it may be a lost record as well. Unless someone got the county wrong somewhere.

9
Applying a corrected relationship to a census on Ancestry
4
Losing FamilySearch.org functionality from links to digital images. What am I doing wrong?
11
Street index for Canada 1921 census
2
Finding more details in 1851/1861 Scotland Census?
2
Who are the parents of Henry Charles Pynn?
4
How to narrow down date of U.S. census data collection before 1850?
4
Where is the 1911 Census record relating to Milly Bungay/Mason/Weston?
11
How can I distinguish between name changes and missing records?
2
Reading occupation in 1906 Denmark Census image?