Fractal display of a family tree on a computer screen

Is there a computer program that allows you to see a whole family tree, on screen, and expand, compact and shift, vertically and horizontally, just as you can in Google Earth?

I've wondered about this before, so I had another look and found ZoomPast, a (newish?) project from Imperial College, London. I've only had a brief play with it so far, but may be the sort of thing you're looking for. There are some introductory videos on the site that show how the amount of detail presented varies "fractally" with zoom level. You can upload a Gedcom file or build a tree manually. It seems to be purely a visualisation package, and online only, so there's no research, analysis or offline working as far as I can see, and it doesn't link to trees on other sites so won't keep in sync. My 440 person Gedcom test file uploaded and processed in under a minute.

An example from my tree, with people I've mentioned in other questions, looks like this:

As you zoom in and out, the family boxes expand to show individuals in more detail, and if you zoom fully in to a single person it shows a timeline of their life.

It seems quite an effective display tool. I'll probably use it to show family members different bits of the tree, flying in and out is fast and looks pretty cool.

It's also potentially useful for highlighting gaps in a tree, as they can show as voids in the display even when zoomed out a long way. For example, in the image above, near top centre, you can see that John Hill has parents in the grouping box, but his wife Hannah does not. Likewise you can see that William, to their right, has both parents in the tree but only one set of grandparents. (Another missing set are the parents of Elizabeth Crawley, as it happens).

It is not quite fractal, but with Kith & Kin you can zoom in and out and move around the tree area. See Tutorial - Using the Tree Area

The disadvantage with the Tree Area is that you have to place the put the families in the area yourself rather than it dynamically drawing it as you zoom in and out, which can lead to some very messy looking trees. 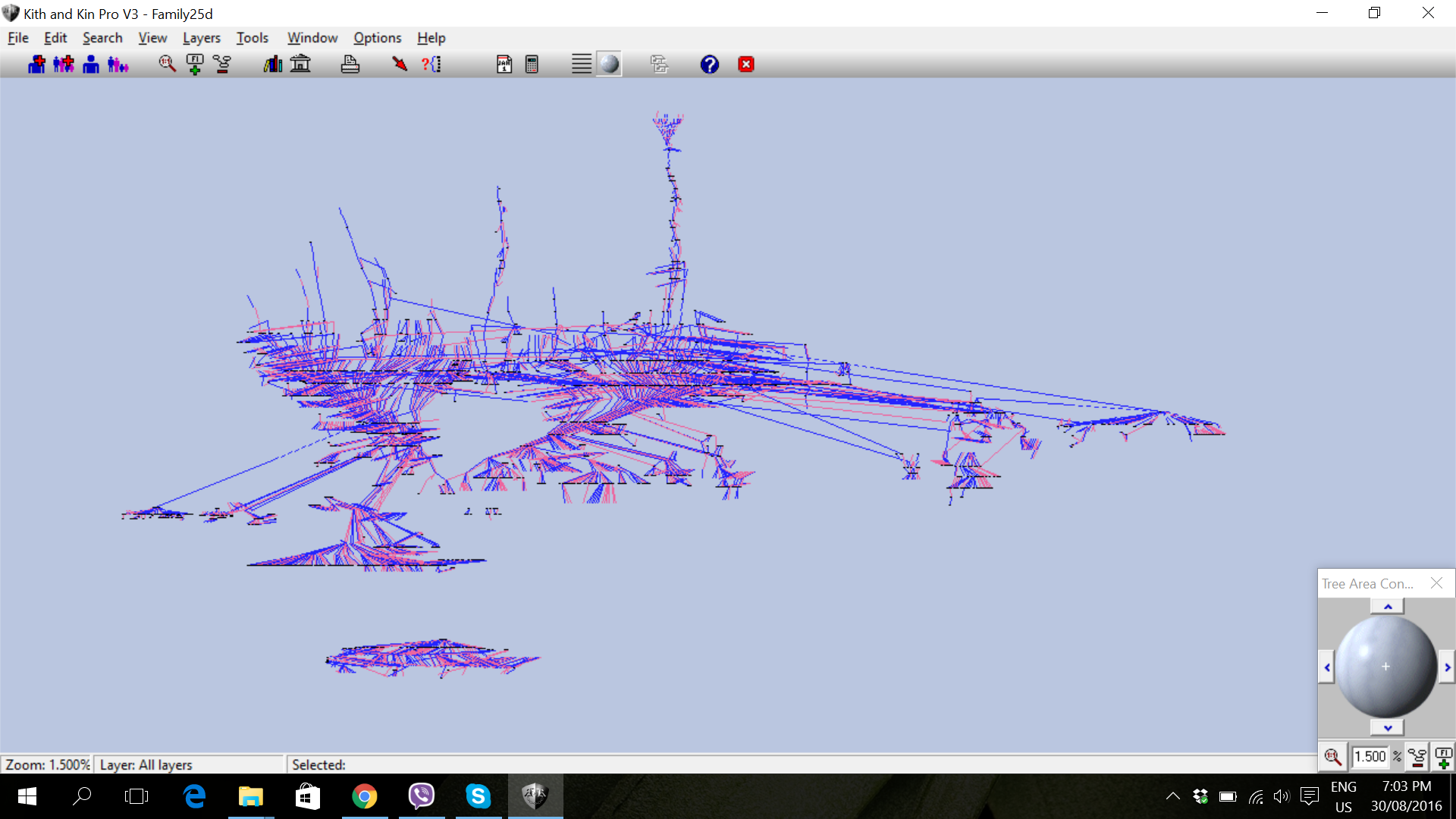 Although you can use Layers to reduce the clutter, e.g. show only your direct ancestors and families or other groups of families 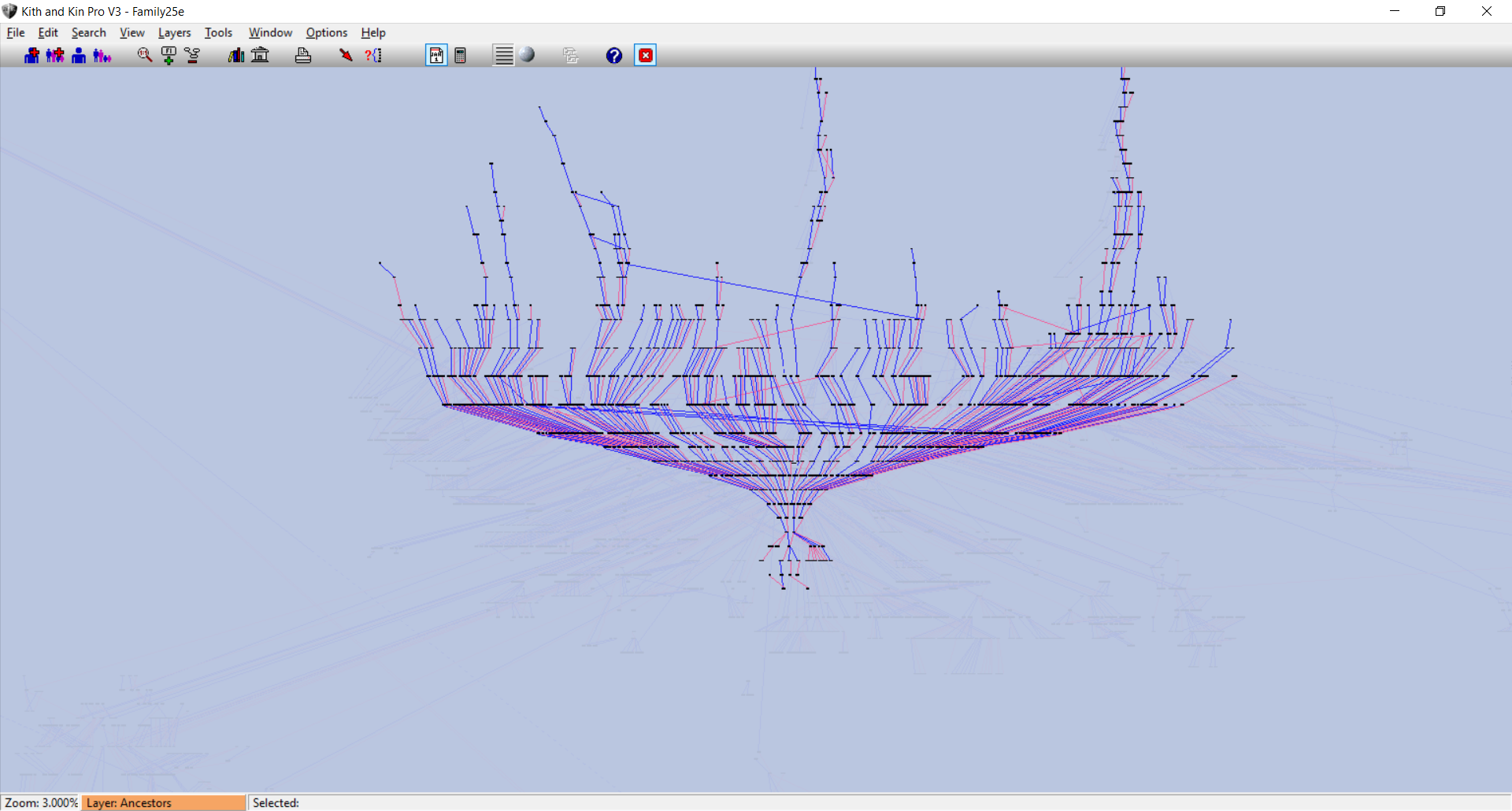 Don't the MyHeritage and Ancestry sites already do this for you? 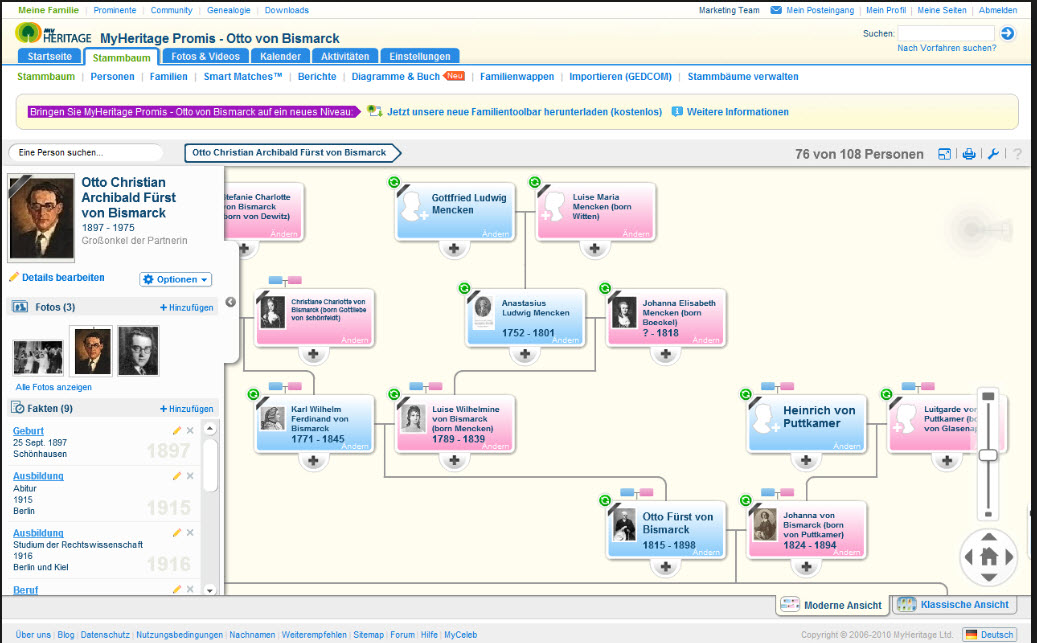 In the MyHeritage screenshot above, notice the home button and left-right-up-down arrows at the bottom right, and the zoom slider above it.

In the Ancestry screenshot above, notice the Plus, Minus and Slider buttons at the left.

Not the answer you're looking for? Browse other questions tagged software-recommendations or ask your own question.

2
Are there any tools that will display a complete tree
11
Displaying exponentially growing family tree in practical way?
9
How were the beneficiaries of the 1872 Will of Mary Rogers related?
1
Making family chart with everyone in it?

21
Intra Family marriage / rejoining family trees?
12
What factors should I consider when moving away from obsolete family tree software?
16
Software options to display whole tree from imported GEDCOM?
5
Is there a space to collaborate to create a single family tree (for a surname)?
1
Layout tools to print big GEDCOM plus pictures to posters?
3
Seeking Family Tree Software with Photo Integration that tags faces of people?
1
Best way to make photo of very tall family trees?
1
is there a GRAMPS descendant or family report that includes photos