This question concerns the family of Alfred Clarke, who served in the 4th Brigade of the Royal Artillery. They appear in some of my previous questions, including Were British Army families stationed overseas enumerated in any Census returns?

Three of the children -- Alfred Robert, Ellen Beatrice, and Walter Thomas -- appear on the same page of a baptism register in Ancestry's collection UK, British Army and Navy Birth, Marriage and Death Records, 1730-1960. 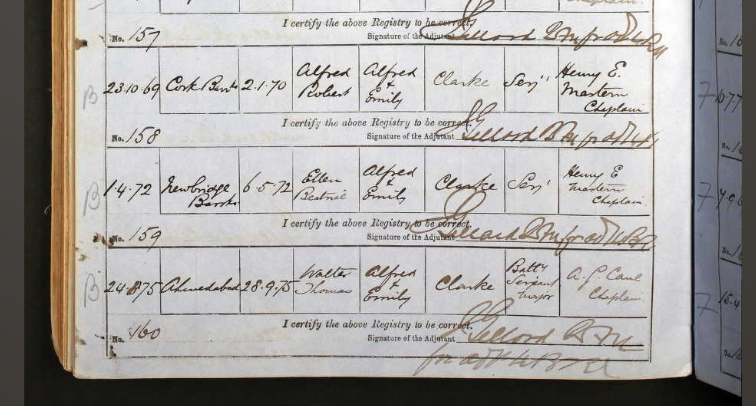 These are at the bottom of a page. I checked the following page but did not find any other Clarke records. (See the answer for the index page that points to these records.)

I would like to find the corresponding item in TNA's Catalog at http://discovery.nationalarchives.gov.uk/

I searched for WO 69/554 plus the surname "Clarke" and found an entry for Alfred and Emily's marriage register, which (according to TNA at the time the catalog entry was written) has not yet been digitised:

All the entries below appear on folio 30v. The folio number is to be found in a circle at the top right of each folio.

However, I don't expect all catalog records at an archive to have all the names of the people who are in the records.

What's the most efficient way to narrow down which register we've looked at, when the individual's name doesn't appear in the catalog?

Using the catalog reference for Alfred and Emily's marriage as a clue, I moved to the next image on Ancestry and looked at the top right corner of the following page:

I started from the catalog entry for Alfred and Emily's marriage, which was WO 69/554/30, looked below at the grey box marked Context of this record, and chose the link to Browse by Reference.

I backed up to the entry for WO 69/554 to get general information about the register:

The volume consists of four parts:

The Marriage Register and the Baptism Register have been indexed. The Indexes have not been indexed but should be consulted as they sometimes record additional information such as the date of a soldier's death, transfer or discharge and whether on the married establishment or not.

All the entries below appear on folio 111v. The folio number is to be found in a circle at the top right of each folio.

Entry 154: Duncan Richard, a child of Duncan McKENZIE of 4 Brigade Royal Artillery and Emma, was baptised on 5 November 1871 at Plympton. Note: Born 28 October 1871.

Entry 157: Patrick James, a child of Patrick KING or FLYNN of 4 Brigade Royal Artillery and Catherine, was baptised on 16 September 1875 at Belgaum. Note: Born 23 August 1875.

Entry 159: Ellen Beatrice, a child of Alfred CLARKE of 4 Brigade Royal Artillery and Emily, was baptised on 6 May 1872 at Newbridge Barracks. Note: Born 1 April 1872.

Covering dates are those for the earliest and latest entries on this folio.

The information in these entries agrees with previously collected records such as the Slapton School Registers, which makes me reasonably certain this is the same family.

My next step will be to browse back to the indexes on Ancestry to look for other information, as TNA suggested.

Index of the baptisms confirms there are only three entries:

Despite TNA's note in the catalog that the images on folio 30v have not yet been digitised, I was able to find Alfred in the index of marriages (entry 90)

and browse back in the register to find the right entry: 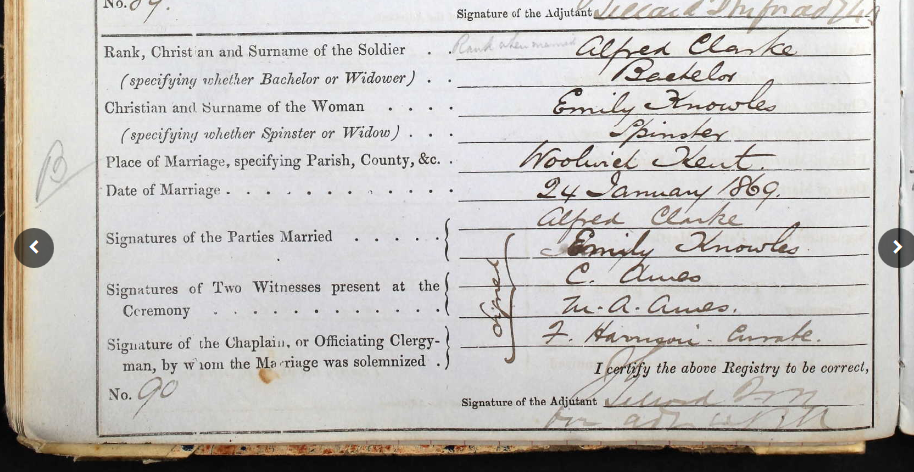 Browsing back to the start of the book on Ancestry revealed the piece number:

... and gave me a date for the register book (when and where it was completed?):

This particular piece (register) is different from all the other regimental records of births/baptisms and marriages previously collected.

Not the answer you're looking for? Browse other questions tagged 19th-century england military-records baptism-records archives or ask your own question.

9
Applying a corrected relationship to a census on Ancestry
6
Finding Devon parish marriage records?
7
Were British Army families stationed overseas enumerated in any Census returns?
6
Interpreting tours of duty on British Army service records?
5
Finding alternate indexes or record sets for passenger lists / ship manifests from Germany?
2
Did Richard Hill and Blanche Todd live in India in the late 19th Century?
6
Tracing ancestor CF Evans who died in World War 2 (aged 39 in 1945)?
11
How can I distinguish between name changes and missing records?