Does a bequest of $1 or "to be paid on their demand" mean it is a minor child?

I'm looking at the Will of Zebulon Tharp dated October 1, 1775. On page three it appears as follows: 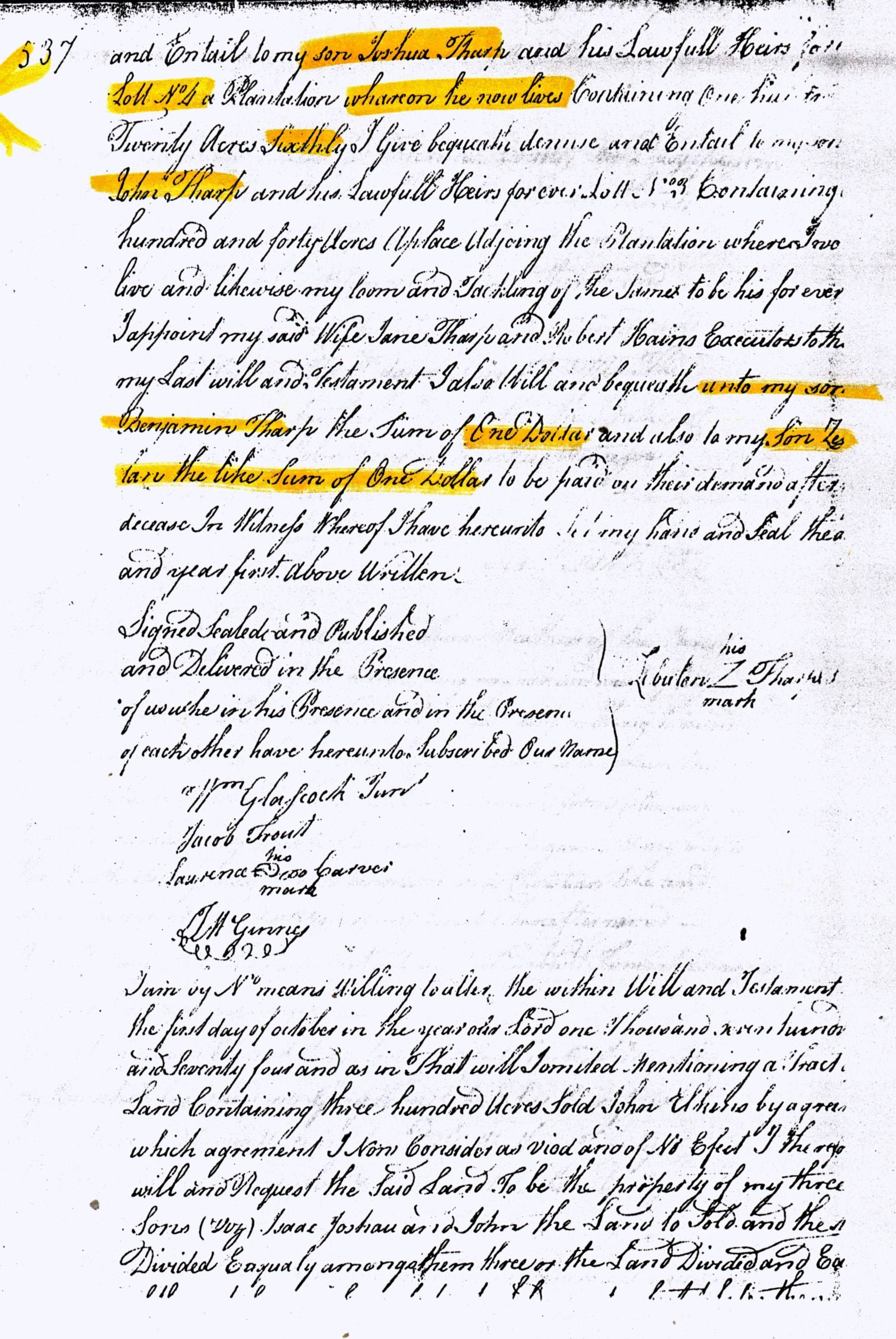 Starting at line 8, it reads in part:

A librarian told a friend of mine that this means the two that got $1 were minor children at the time. One may not wish to bequeath land (like the other four sons get 120 acres each in this will) to a minor child and to avoid issues later, you name the minor explicitly by giving them one dollar.

Alternatively, does the phrase to be paid on their demand mean they are minor children?

Is this correct, can we infer that at the time the will was created that Benjamin was a minor? Can anyone provide evidentiary support for this practice in the literature? Or does this just mean the father preferred the other sons?

This answer is based on my experience with English probate records. While the probate process in the British colonies differed from that of the colonial power, the process was no doubt modelled on its British counterpart.

In England, it was customary for the testator to mention all his children in his will such that it was clear that none had been forgotten. In this way, the bequest was simply an acknowledgement. This was, theoretically, done so that a "forgotten" child did not have legal recourse to claim his share of the estate. It was thus not uncommon for a testator to leave one shilling, or another nominal sum, to certain children. This did not imply that he necessarily had a disagreement or lack of affection for those children, or intended to disinherit them. On the contrary, they had likely been provided for at marriage or when they came of age, had already inherited from grandparents, or had already had sufficient wealth or income.

I see no reason to conclude that the one dollar legacy implied they were minors. In fact, I might view it as evidence that they were adults. Minors would commonly be left more substantial legacies in the trust of another person. In the absence of making other provisions for their upbringing, I would say that it is unlikely they were minors.

The phrase "to be paid on their demand" also does not imply they were minors either. It was probably included to direct the executors that the legacy need not be paid unless those sons request it. This is consistent with my suggestion that these sons already had sufficient wealth (whether or not that was provided by their father) that they would likely not pursue or require payment of their $1 legacy.

In summary – no, do not conclude these children were minors.

5
Where to find Will of Giles Chichester from 1820s, probably in Somerset or Guyana?
4
Minimum age to be mentioned in a will?
6
What are these words in the 1841 will of Elisha Strong?
1
How to interpret hand written will that refers to children and possibly in-laws?
5
Separating families with identical parents' names in the same parish in Norfolk, England from 1730-1760?
4
Understanding 1807-1812 Pennsylvania land records document?
4
Who were the wives of John Ervin (1791-1843)?
10
England - what are some possible reasons that my ancestor only listed his daughters in his will and none of his sons?
3
Widow's probate in 18th century US?