Why is Maria listed twice in this 18th century church record?

I see a Maria Lent listed twice in a church record shown at Ancestry.com:

Also the year is unclear and entered twice there:

Which one is it, why is she listed twice on the page and where is the baptism date shown?

I think the baptism date has been taken from the second date at the top of that page which is the first one not clearly marked as being a birth date. They are in a column headed Chd [= Child] & Date. It seems like the next name does not have a birth date and that 18 Sep 1791 is intended to be the baptism date for all subsequent baptisms until the next non-birth date is written. 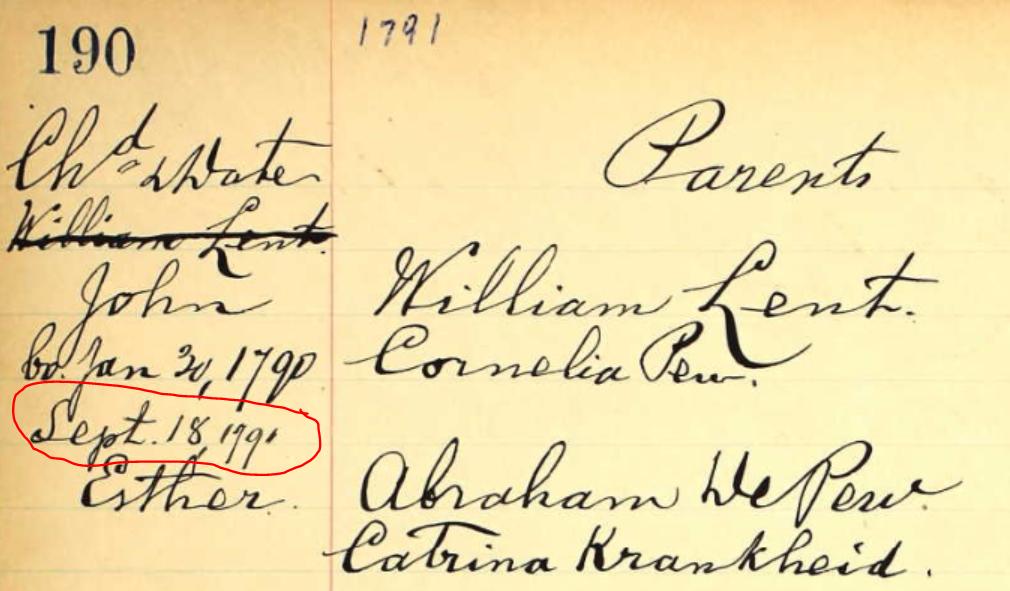 On that page, there are 13 births recorded, and 5 of them are to parents with the Lent surname. It seems like Lent may have been a common name in that community. Previous pages have lots of Lent surname baptisms too.

Consequently, and in the absence of any other evidence, I agree with a comment by @HarryVervet that there appear to be two successive births recorded for babies named Maria to presumably two fathers, both named Hendrik, with women name Maria and Margaret, on different dates.

I am unfamiliar with the Dutch Reformed Church and searched Google for information about their position on polygamy, but that did not suggest that it was likely practiced. Even if it were a single church-endorsed polygamous Hendrik, then I am also unsure whether naming two daughters, that appear to be born only one month apart, would be given the same name.

Not the answer you're looking for? Browse other questions tagged birth-records 18th-century new-york-state baptism-records church-records or ask your own question.