Why are the lengths GEDmatch.com Chromosome Segment Matching segments not proportional to their cM?

The GEDmatch.com Chromosome Segment Matching report has the following legend:

One of my reports has the following triangulation match:

Since the green segment is almost 3 times as many cM, why does the visual show the purple segment being almost twice as long? Is the match somehow spread out with bits of non-matching portions mixed in, thus getting elongated?

Also, what does the F2 type mean (not show in image)? I'm getting F2 on each matching person's table entry above the graphic such as the shown one above.

Does such a matching segment mean the two kits are identical in the regions shown?

The colored segments are not drawn in terms of cM, but in million base pairs (Mbp), which are the number shown on the bottom of your graphic. The numbers at the bottom are very approximate in position.

It just so happens that the green segment has more cM than the purple segment. That is entirely possible. cM or Centimorgan, is not a measure of length, but is an approximate measure of how often the segment is expected to crossover in one generation. 11.9 cM means that there is approximately an 11.9% chance that this segment will crossover in the next generation. A crossover is where the father's chromosome half switches with the mother's and a crossover will change the part of the chromosome that will match in the next generation.

Some parts of the chromosome subdivide more often than others, and it so happens that your green segment subdivides 3 times as often as your purple segment. That is important, but it's not what's graphed.

The F2 your are talking about (as in the below image): 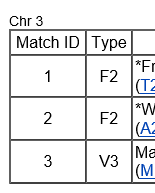 is the company and version of the file that the DNA information comes from:

It has nothing to do with whether the kits are identical or not.

Not the answer you're looking for? Browse other questions tagged dna autosomal-dna gedmatch.com triangulation or ask your own question.

4
How to effectively communicate your tree for DNA Matches in first contact emails?
7
How to interpret a reasonable X DNA Match, but no shared cM Autosomal result on GEDMatch?
7
Partial matches on Triangulated DNA segments
4
What explains sharing a 28.6 cM DNA segment with a sixth cousin?
2
How can overlapping ~35 cM segments of matching kits not match each other?
11
Why are 99% of my Ashkenazi DNA matches not in the Middle East or Central Asia?
7
Explaining major discrepancy in genomic position between Gedmatch and MyHeritage?
3
Brother/sister have fully identical segment -- match only matches one of them on that segment
5
Clustering of DNA regions at the grand-parents level