I am searching for the passenger list of the final voyage of the SS Galway Castle. The ship left Plymouth on 10 Sep 1918 bound for South Africa, and was torpedoed by the Germans two days later near the entrance to the English Channel. About 143 passengers and crew died.

I have been unable to locate the passenger manifest on any of the usual sources such as the UK Outward Passenger Lists on Ancestry.com and FindMyPast. I suspect that the record, if it exists, may be archived separately because the ship sank. Some of the casualties appear on the Commonwealth War Graves Commission but I am also interested to locate details about survivors, hence the desire to see the passenger list.

The passenger list for the final voyage of the SS Galway Castle is available at Ancestry courtesy of the National Archives (UK).

SS Galway Castle is said to have departed on 10 September 1918 under the command of captain W. B. Dyer with 346 passengers, ~200 crew members, and ~400 soldiers returning home to South Africa.

The date of departure of the "Rhodesia" is given as 9 September 1918. It is impossible for ship 132616 and master W. B. Dyer to have departed on both 9 September and 10 September, so this must be the same voyage.

Also note that Union-Castle Line did not have a ship named "Rhodesia" in 1918. 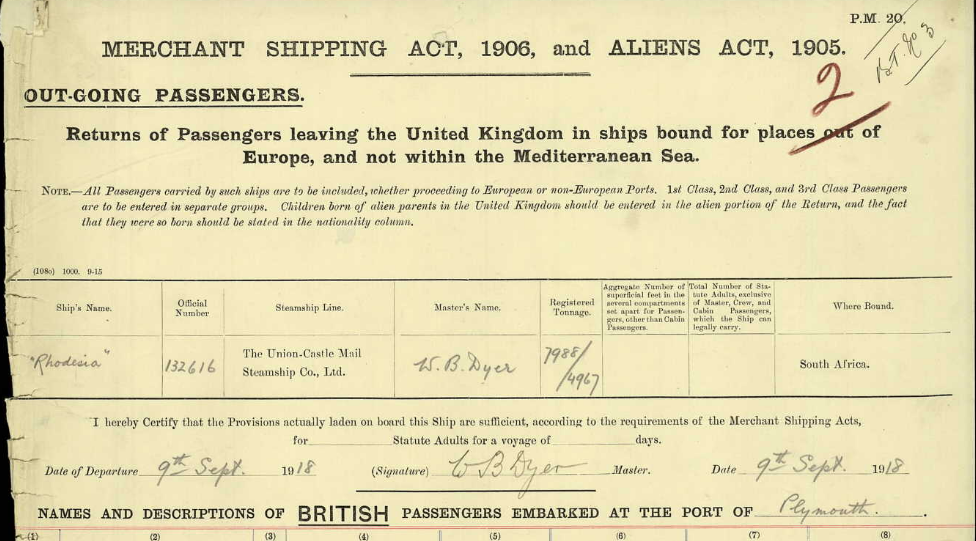 Here is a snippet of the passenger list showing 2-year-old Miss E. D. Nursey, mentioned in a comment:

Here is a snippet showing Dr. R. A. Buntine and two teenage girls who are presumably the daughters mentioned: 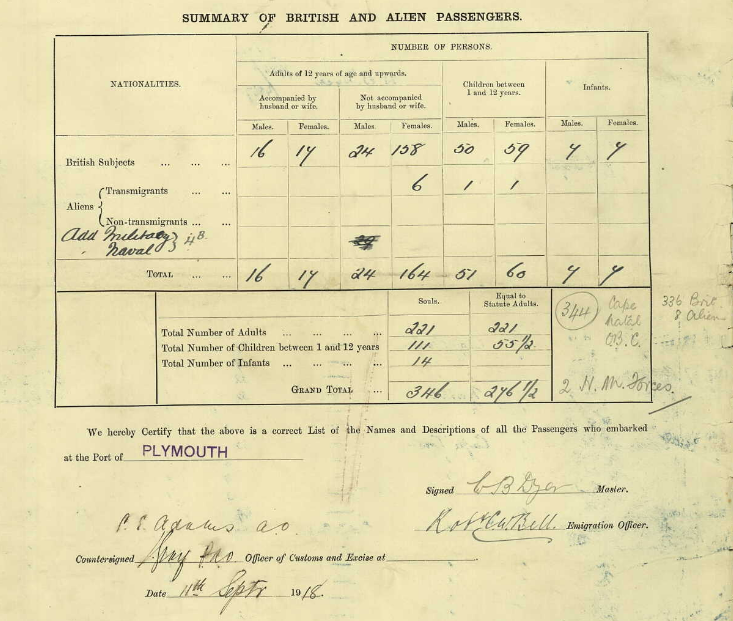 For comparison of ship's numbers, here is the top of the first page of the passenger list showing the Galway Castle, Official Number 132616, tonnage 7988, Master W. B. Dyer, sailing from London to South Africa on 29 August 1917: 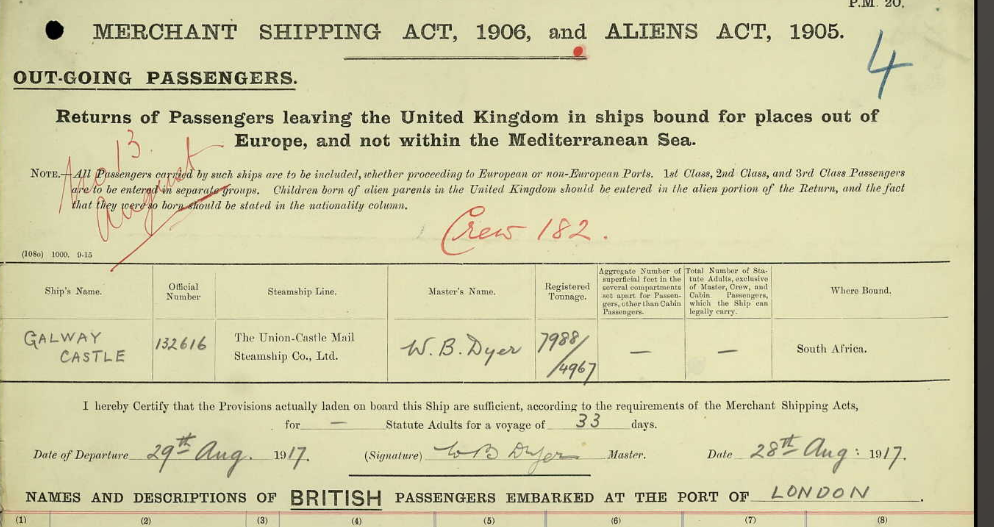 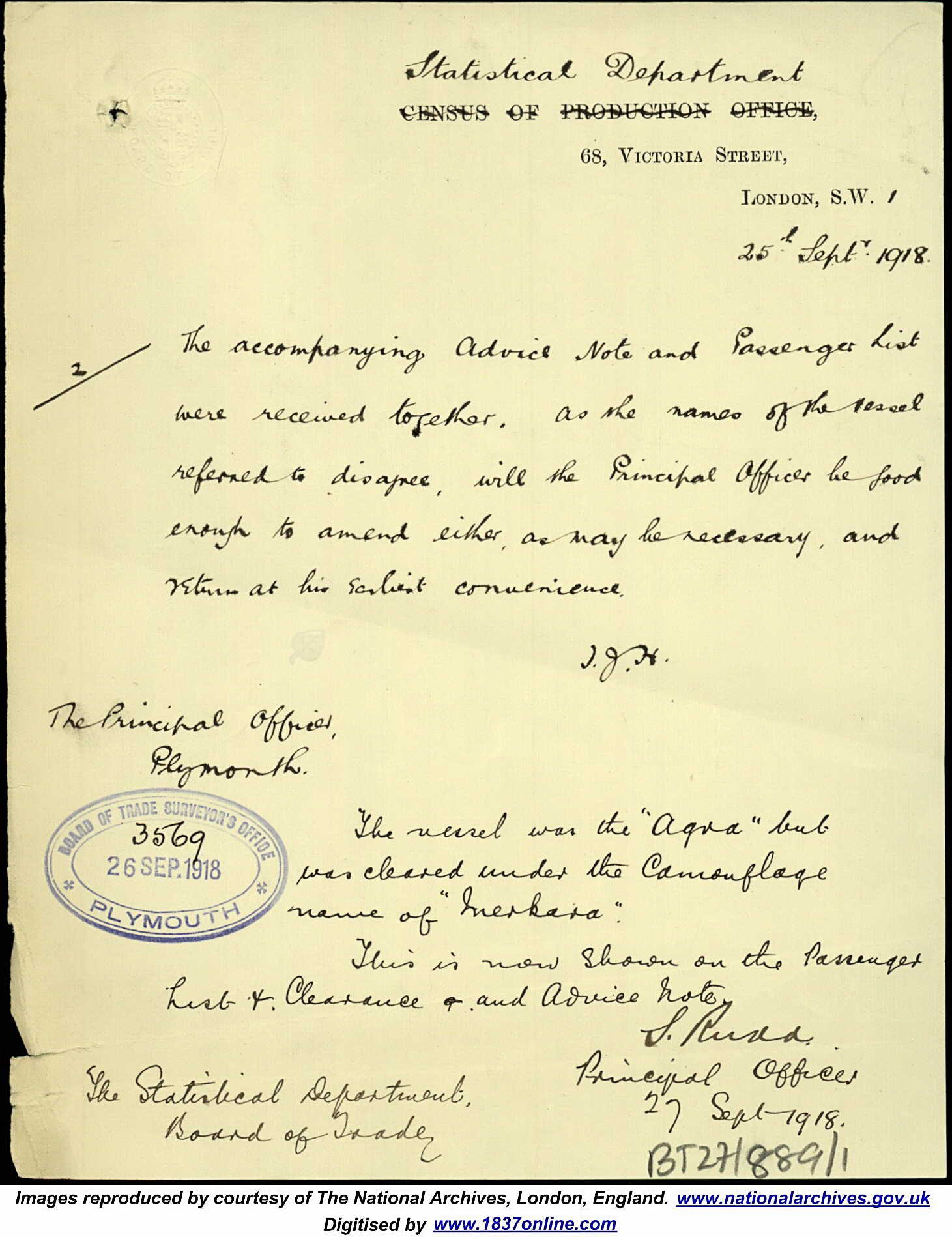 There was a book called The Union-Castle and the War written shortly after the war, with good information about the role Union-Castle's ships played during the war.

In cases like this, I often search for the ship itself and mine those websites and newspaper accounts for clues about where records might be found. Newspapers of the day may not have accurate information in the early accounts, but they can be helpful in establishing a timeline of events.

The website The Red Duster has an entry for the SS Galway Castle in its information about the UNION-CASTLE MAIL STEAMSHIP CO (page 16). In addition to valuable information for an event timeline, the entry says:

At the time she was carrying 400 South African walking wounded, 346 passengers and 204 crew members.

Destroyers were summoned by radio to rescue survivors who were taken back to Plymouth where it was ascertained that 143 persons had perished.

The site St Helen's Rolls of Honour has a list of casualties which can be compared to other casualty lists.

The survivors, including the Captain and those crew members who had stayed aboard the SS Galway Castle and others rescued by HMS Spitfire and Oriana were returned to their point of departure at Plymouth.

Records suggest that at least 143, and perhaps more than 150, lives were lost.

Unfortunately none of these sites have clear source citations on their pages.

Don't restrict yourself to the British Newspaper Archive when doing newspaper research. This article from The Sydney Morning Herald, accessed from Trove, reports:

The Galway Castle had 1000 people aboard. The majority of the passengers consisted of women and children, who travelled third class. Of the latter 100 perished. A message from Capetown says the Union Castle Company state that there were 744 passengers on the Galway Castle, including 309 invalided South African troops and a crew of 207. The civilian passengers missing number 114, and 34 of the crew are missing.

Mr. H. S. Burton, the South African Union Minister of Finance, who was aboard, is reported to be safe. He has had an adventurous experience. He went to England by the Kenilworth Castle to attend the Imperial Conference, and the ship was seriously damaged in a collision with a destroyer, there being considerable loss of life. The missing include Major R. A. Buntine, a member of the Union Parliament. Major Buntine's elder daughter is missing. The younger one was saved.

The section of the article further down the page, headed SURVIVOR'S EXPERIENCE, has descriptions of the events from the survivors.

Plymouth-area newspapers or local history books might mention which hospitals treated the survivors.

Another approach would be to search for any surviving records of the Union-Castle Mail Steamship Company.

My grandmother and mother aged 3 were aboard The Galway Castle when it was torpedoed and were two of the fortunate survivors. I have just unearthed two cuttings one from (I think) a Bath Local paper "Bath victms on torpedoed liner" and the other from the Telegraph "The Galway Castle - List of saved and missing" - Both are in a poor state and are the columns only

I can contribute three names to the passenger list that you seek.

My grandmother Margaret Malcolm was traveling with my father Douglas Malcolm and infant uncle George on the Galway Castle when it was torpedoed. Margaret and Douglas survived but George did not and is buried in, I believe Plymouth.

My Grandfather, Hilton David Edwards, was on the Galway Castle when it was torpedoed.

He was a survivor & he wrote an article for his local newspaper about that tragic event.

He was on his way back to South Africa after having recuperated in the Military Hospital in Richmond, Surry.

He lost his right arm at the Battle of Old Menin Road near Ypres, in WW1. He was operated on in a field hospital tent in France before being sent on to Richmond, Surry to recuperate.

He used to tell us Grandchildren that the wonderful SA Nurse, who had cared for the wounded soldiers, had drowned when the Galway Castle was torpedoed. That upset him very much as they owed their lives to her dedicated care & nursing.

Grandpa had boating experience when growing up on his parents farm. When they were on the lifeboat he kept on saying that they had to get as far away as possible from the ship to avoid being sucked down into the sea. Continuously baling sea water out of the lifeboat with the high seas washing over them.

They were then picked up by a British Destroyer several hours later. Cold, wet through, & exhausted. He was returned to the Military Richmond hospital to meet up with my Grandmother, whom he met, whilst recuperating.

She had volunteered her services to the soldiers, writing letters to their families when they were not able to do so.

After a chaperoned courtship in Kew Gardens he married my Grandmother. Returning to South Africa with his British war bride.

0
Sinking of the SS Galway castle in 1918, is there a complete list of missing passengers