The cropped image below comes from the Death Certificate (dated 28 Aug 1884 at 127 Watt St, Glasgow Kinning Park) of my 4th great grandmother Mary Campbell who married Robert Clacher. The remainder of the certificate gives her name as Mary Clacher (Widow of Robert Clacher Plasterer (Journeyman)) and says her daughter E[lizabeth] Lamont was present at her death.

Her father is named as Archibald Campbell, Goods Carrier, (deceased) and her mother as Agnes Campbell but what I cannot work out is the order of Agnes' previous names. 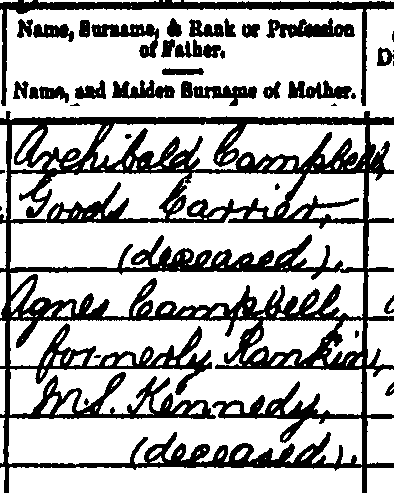 I'm not sure whether Mary's named mother is:

Curiously, I think Archibald Campbell was married twice and that Mary may have been the daughter of his second wife Elizabeth Munn because there is a baptism that would support that. If I can learn more here about the former names of the named mother Agnes Campbell then I will be better able to assess the evidence for that.

Here is some more text from the record below this one that seems to suggest that the letters before Kennedy above is MS. All three records on the page seem to have MS before the Maiden Name of the named mother. 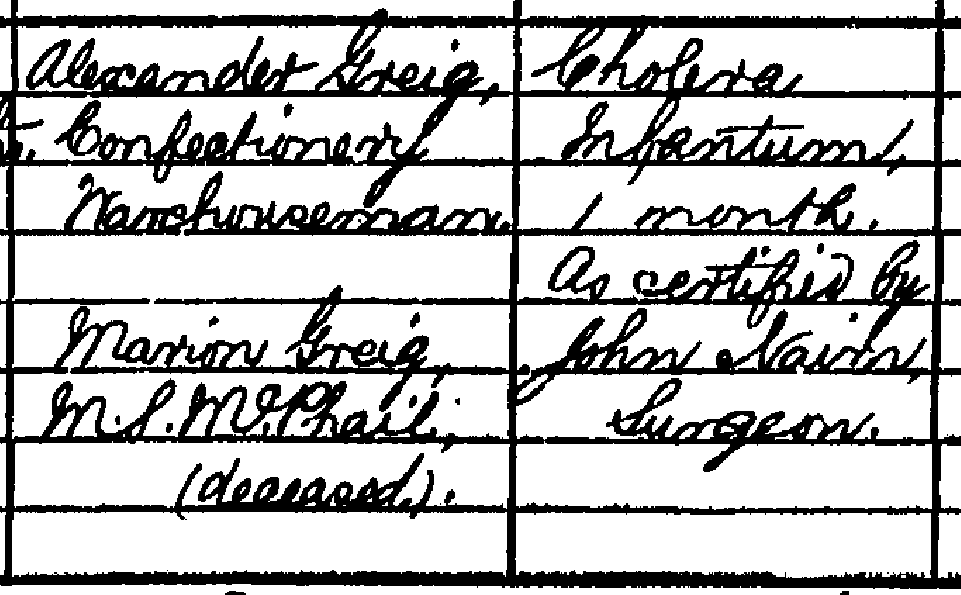 It looks like "M.S." was a common abbreviation for "Maiden Surname" in Scottish records. There are numerous references to this in commercial sites (two examples) and forums (Rootsweb) although I can't find a direct reference to it on Scotland's People.

So your record suggests that Agnes was born a Kennedy, married a Rankine, and later married Archibald Campbell.

Campbell is her current surname, Rankine her previous married surname and Kennedy her maiden name. M.S. is for Maiden Surname.

Not the answer you're looking for? Browse other questions tagged death-records scotland 1880s lanarkshire or ask your own question.