What explains sharing a 28.6 cM DNA segment with a sixth cousin?

It seems strange to me that a sixth cousin would match such a long segment and further that none of my seven other close cousins that are also related to this person have a long segment. After the matching 8 cM above, another cousin shows a 5.421 cM segment on a different chromosome, all other matching segments are less than 5 cM.

Does this make sense? Could there be something wrong with the GEDmatch.com analysis or the DNA files? Why would a match be so uneven across my cousins.

You might want to look over this blog article: Genetic Genealogy and the Single Segment. It discusses a few points one might want to consider when one matches another person on just one segment.

One aspect touched upon there is how segment size changes as we match on more distant ancestors. It's true that we get on average half as much DNA on average from the typical ancestor in a generation immediately preceding a given generation of ancestors. One might think this means the segment size inherited from that preceding generation is always smaller, but that is often not the case.

Inheritance of a stretch of DNA from a grandparent is predominantly an all or nothing situation; only occasionally does a stretch include genes from both grandparents instead of excluding all DNA from one grandparent or the other. For shorter stretches, it's close to a 50/50 chance whether you get any DNA at all from a particular grandparent within that stretch. (On the other hand, for long stretches like a whole chromosome it's quite likely you'll get some from each grandparent.)

The bottom line is that if you inherit a stretch of DNA from a distant ancestor at all, then the piece you inherit can be larger than you expect from the fact that the amount of DNA passed along in total halves with each generation.

In your case of a 28.6 cM segment shared with a sixth cousin, your common ancestor would have been a 5-great grandparent. Given that a segment is passed down, the likelihood of a segment being passed down one generation without being chopped down to shorter than 28.6 cM is about 72%. (This is based on the rule of thumb given in the linked article, but this "rule" begins to get too inaccurate above about 50 cM.) Since there are 7 births between you and your 5-great grandparent, this would mean there is about a 10.2% chance that the segment you inherited from them is not reduced below 28 cM.

For you to share that segment with a sixth cousin, they also not only have to inherit a segment in that area, but it must be at least 28.6 cM in size. So for both of you to have the segment not shortened to a smaller size, your two segment copies each survived an equivalent gauntlent of inheritance at 10% each. Hence, there is about a 1% chance (10%*10%) of this size being retained by both of you.

Is 1% believable? To me, it's borderline: not ridiculous but unlikely. So I'd think there could be an error somewhere, but know that there may not be.

Sources of error are not likely to be in the DNA files or GEDmatch matching in my estimation. To me it seems more likely that there is some aspect of the two family trees that is unknown or incorrect. For instance, a spurious extra generation might occur in one of the trees which together show the sixth cousin relationship. Another possibility is that there is another unknown relationship among the two sets of ancestors, one that is a bit closer than the documented one and which actually is the source of the shared segment.

According to Jim Bartlett in his Crossovers by Generation blog post, he shows in his Figure 3: 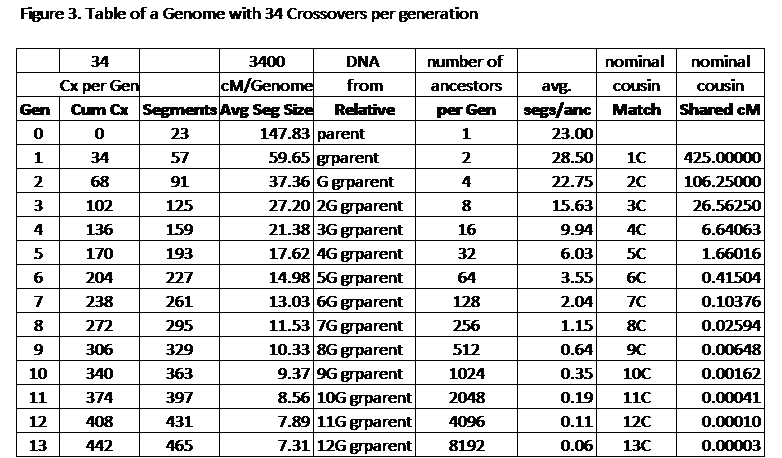 Yes, those averages make a 28.6197 cM match seem unlikely if you selected one particular cousin. And yes, that match really is unlikely. However, you have so many 6th cousins (if 4 non-end-of-line children per generation as they used to be) you could have 4^6 = 4096 6th cousins. Multiply that by 64 different ancestors who you could be 6th cousins through, giving on the order of 262,000 possible 6th cousins. Now the question is how likely is it that one of those 262,000 6th cousins shares a 28.6197 cM match with you. I don't have the exact statistics on that, but I'd expect it would now be quite possible and you were lucky enough that one of those who do have that large a match with you was someone who happened to get DNA tested. You didn't win the lottery, but you got lucky here.

I belive the odds of inheriting 28 Centimorgans increases exponentially when we consider the different sizes of Chromosomes. 28 Centimorgans would be small on Chromosome 1 for example, wch is close to 300 CMs. I suppose in this sense it would be very possible. Just my thoughts. Matt.

Not the answer you're looking for? Browse other questions tagged dna autosomal-dna gedmatch.com or ask your own question.

4
How to read DNA matches across multiple related people to a 3rd party?
5
Is the Autosomal DNA testing ever wrong on relationships?
5
Half sisters or aunt/niece relationship?
7
Partial matches on Triangulated DNA segments
2
Sharing more autosomal DNA with second cousin's child than with second cousin?
9
Unknown 1st cousin match who shares matches with both grandparents
1
DNA/Half-Sibling or First Cousin, Based on Fairly High Shared cMs
1
Can a DNA match of 1967cM across 72 segments be a first cousin?
1
Autosomal DNA match anomaly or false positive?