How to generate a report of ancestors by generation?

Somehow years ago I generated a report (a text file) that listed every person in a Personal Ancestral File (PAF v5) or GEDCOM file by their generation. I only had PAF to work with (and was also playing with a network analyser called Pajek), but I can't find such an option in PAF. How would I have done it?

I've attached here a screenshot of the old file, opened in Notepad, so you can see what information had been generated. The second column (of single-digit numbers) are generation numbers, going from the youngest generation as 1 to oldest generation as 11 (in this dataset). The *.rep file extension might be a clue as to what generated it.

This is not my family tree, it is from anthropological research. So I am not interested in solutions that report on my personal kindred - I'm not in the dataset. In fact, although the names in the dataset are all linked, they belong to multiple descent lines, so any kindred-based solution (e.g. "tell me about all of Mary's ancestors") will not work. Somehow I had stumbled upon a report-generator that took all 671 names in the dataset and returned their generational ranking. What might I have used way back all those years ago? What might I use now (preferably without buying anything)? 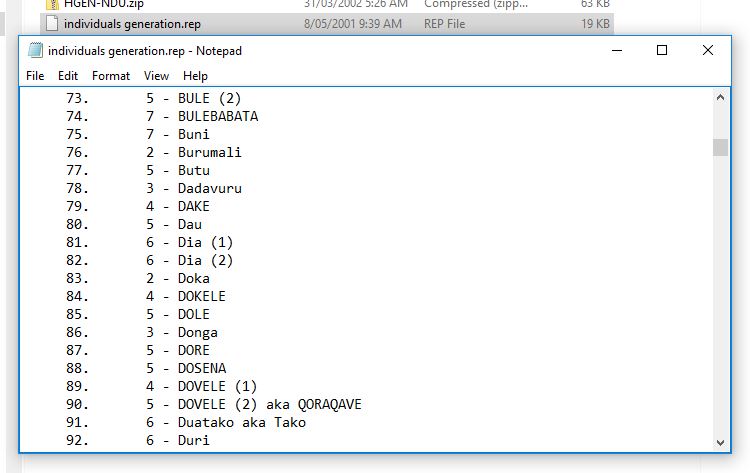 Not the answer you're looking for? Browse other questions tagged gedcom software-recommendations or ask your own question.

22
Intra Family marriage / rejoining family trees?
8
How can I find loops in GEDCOM files?
8
Application to create a Google Map of ancestors?
6
How to list GEDCOM events with missing sources?
7
How do I create a list of my most distant ancestors online or with a Mac?
7
How to split up the disconnected trees in a GEDCOM forest into separate files?
7
Software/tool to generate 'trial' family trees?
5
How can I turn a family tree on Geni.com into a printable PDF report?
1
is there a GRAMPS descendant or family report that includes photos