What is expected shared cM of double third cousins?

I've come across double third cousins, who are third cousins through two different routes as the same two families had two separate marriages between them that leads to this situation.

For DNA comparisons, I see from this table (found here: http://isogg.org/wiki/Autosomal_DNA_statistics#mediaviewer/File:Shared_cM_Project_v2_updated.png) 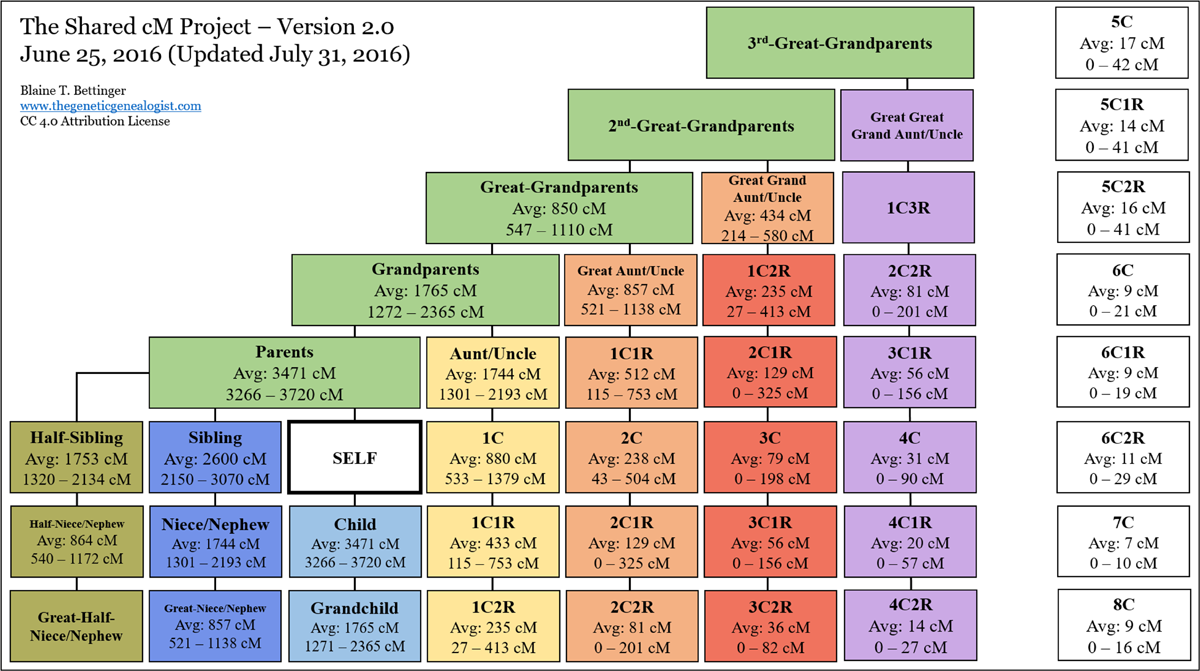 That third cousins would share an average of 79 cM and vary between 0–198 cM. In this case, I found 194.3 cM which seems to support the double third cousins situation, but wonder if we can be more specific as to what to expect for average and range in such a situation.

On Wikitree.com 3rd cousins or closer is the limit to qualify for direct autosomal DNA comfirmation without requiring DNA triangulation.

Would double 3rd cousins move one into needing triangulation or away from it to confirm the connection?

I would think it would move the relationship closer and thus be considered closer than 3rd cousins, but with DNA it might be more complicated than that.

So double third cousins would move one away from needing triangulation to confirm the connection.

Yes it does make the relationship closer than single 3rd cousins.

Not the answer you're looking for? Browse other questions tagged dna autosomal-dna triangulation or ask your own question.

3
What is expected shared cM of cousins with only one shared grandparent?
3
What do you call folks that are third cousins two different ways?

10
What is the significance of "shared centiMorgans"?
3
What is expected shared cM of cousins with only one shared grandparent?
3
Can seventh cousins share 54.7 cM of DNA?
3
Shared centimorgans of second cousins with different paternal grandfathers?
5
Determining shared maternal or paternal lineage via shared DNA segments?
3
Understanding double cousins?
2
Shared DNA when MRCAs are Cousins