Does the available evidence support these assumptions?

I'm devising a complex search strategy to identify the birth and parents of my great-grandmother Mary Ann Harper. She's already discussed here: Where was Mary Ann Harper in the 1881 England census? and here: Locating an elusive UK birth record (Mary Ann Harper born circa 1865 possibly Dudley, England)? and I hope I've taken full account of the answers to those questions in the formulation of my strategy.

I am assuming she was known as Mary Ann (by choice) or Mary at all points in her life , but will also consider variants such as Mary Annie, Mary Anne and Maryann and possible mis-spellings/mis-transcriptions of those variants, as well as Polly or Molly as a childhood name.

My search will also include other names beginning with Mary such as Mary Alice or Mary Elizabeth, for the purposes of elimination (as they may also appear in records as simple Mary).

I think variants such as Marie, Maria, Marisa and a whole host of others are unlikely (except as transcription errors), as are Ann or Nancy (based on the fact that she used neither in later life).

In all the records I have seen where this is recorded, it's shown as Harper but I'll consider variant spellings as well, primarily Harpur, Harpour and Harp; and be alert for mis-transcriptions (Hasper and Harker seem to be repeat offences).

In case 1 and 3, I'd expect to see her recorded as a Harper in the 1881 census (2 years before her marriage) and possibly earlier censuses as well. In case 2, she could be recorded as anything.

Her known children were born between 1883 and 1902, which doesn't constrain the likely birth range any further.

The censuses from 1891 to 1901 (which are the only evidence so far for place of birth) consistently state that she was born in Dudley (which was at various times in Staffordshire or Worcestershire, but Staffordshire around the expected time of her birth). However, I'm not relying on this, as it might simply be the first place she remembered living.

At her marriage she was living in the poorest part of central Birmingham. Her children were born variously in or near Burton-on-Trent (including her first child), or in or around Birmingham.

I am making no assumptions about her birth place, as there isn't enough evidence to support any.

Although I'm making no assumptions about her birth place, I think it likely but not certain that she was resident in England before her marriage in 1883, long enough to meet her future husband and fall pregnant in late 1882.

I have no evidence for her mother's name.

Her father is named as James Harper (deceased) in her marriage certificate, but that could be:

I am making no assumptions about her parents' names.

I can't flaw your assumptions. All I would add:

To surname assumptions I would add that you also have evidence from her children's birth registrations. Even without seeing the certificates we know that she appears as Harper on all eleven of them: 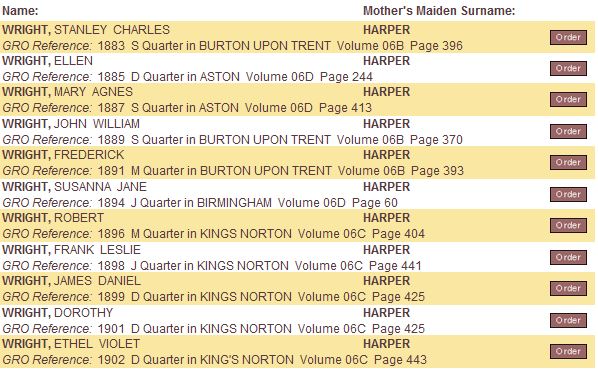 In cases where a woman went by multiple surnames prior to marriage, I have yet to see a case where the mother's maiden surname is consistent for every birth registration. For example, if she sometimes used a stepfather's name, that might appear on a couple of the registrations. The fact that these are all so consistent (and there are so many to compare!) suggests to me that whether or not Harper was her birth surname, it was very likely the surname she had always used up until marriage.

Although likely cost prohibitive at this point, it would be worth checking every birth registration to see exactly how Mary Ann's name is written, and who the informant was in each case.

I have a couple of instances in my family tree where a pregnant 16 or 17 year old married and was listed as 18 or 'full age'. I therefore would not be surprised if Mary Ann was born between 1864-1868. Any later seems unlikely; marriages at 13, while legal, were incredibly uncommon. Based on the other evidence you have I also think it is unlikely she was much more than 18 at the time of her marriage.

The 1911 census also lists her birth place as Dudley – you did not mention that one.

With the only piece of information being a father's name listed on a marriage certificate, you rightly shouldn't make any assumptions about this. I have lost count of the number of times an incorrect father's name on a marriage certificate has sent me on a wild goose chase. Also do not assume that because it says 'deceased' that her father was actually so. It could have been anything from a clerical error to an intentional untruth.

16
Locating an elusive UK birth record (Mary Ann Harper born circa 1865 possibly Dudley, England)?
4
Where was Mary Ann Harper in the 1881 England census?
1
Why is my ancestor missing from the New GRO Index - England?

10
Finding original surname of adopted child from New York?
10
Managing the Multiple Maybes
11
Breaking through brick wall with circumstantial evidence?
6
How are the grandchildren related to the head of household in this census?
2
Finding documentary evidence for father of somebody born 1903 in Kentucky, USA?
7
Finding residence information for Toronto in the 1840s?
6
Seeking census records earlier than 1900 for Indiana ancestor named Delmain?
9
Using shared cM to determine likelihood of misattributed paternity?
4
Searching for UK records when only minimal information to go on?
2
Finding German birth father who emigrated to Canada?