Can commoners have kamon that look like the Japanese Imperial Crest?

I have been researching my Japanese heritage and have found that it comes from the Masuhara「増原」family.

My grandmother says that Masataro Masuhara moved over to the US as a merchant and that he had a brother that worked taking pictures of the Imperial Family.

I've been trying to find our kamon in all this mess and my grandmother has only described it as like flower petals or the inside of sugar cane or bamboo. And I sent her a link to a big list and SHE says that the closest one to what she remembers seeing as a child on heirlooms was matching closest to the Imperial crest, the chrysanthemum.

Although, I am skeptical that it could be that one... she says it was maybe given to the brother for working closely with the Imperial Household... But I thought I should ask if it's even possible.... ><

I don't know much Japanese myself so all this has been twice as hard since I can't go to Japanese websites and such.

Thanks for your help in advance!

Update: So I talked to a few people and one fellow pointed me towards this kamon. It is a chrysanthemum, but it's a lesser known one called 'Mito Kiku' (or Mito Giku/Kito Kiku/Kido Giku)「水戸菊」. There is another similar called "Maru ni kawari yattsu kikka" 「丸に変り八つ菊花」. It looks almost the same except the tip of the petals are pointier. Anyways, I hope that I can figure this out it's really been bugging me. If I can never confirm it, I'll probably adopt this as my new kamon regardless. 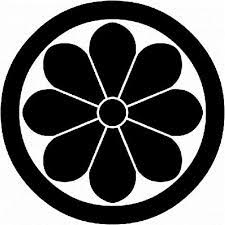 Browse other questions tagged japan heraldry hawaii or ask your own question.

12
What's the difference between a family crest and a coat of arms?
0
Coat of arms: can a charge be placed over a variation of the field?
2
Finding my Great-Grandfather when DNA test not conclusive?
1
Seeking candidates for British ancestor who fathered children in Kobe (Japan) during 1890s?
4
Tracing Japanese ancestor who immigrated to Hawaii?