I have a local news item from the Belle Plaine News, Belle Plaine, Sumner County, Kansas, USA, 4 February 1882 in which it is stated:

What does "in the shade" mean in this time period? I tried to find out when I first obtained the clipping about ten years ago, but no one seemed to know.

James did remarry about a week after this appeared in the paper.

While I have many clippings from this paper where trouble makers were often mentioned, he was never one of them. Thanks! 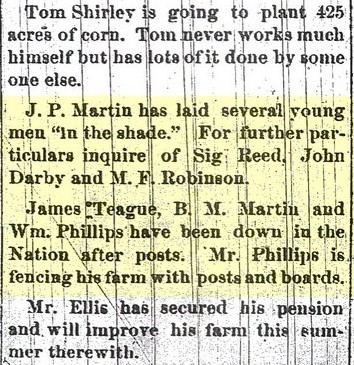 A fairly quick search for "laid in the shade" doesn't bring much up. The common result is the literal interpretation of people or animals taking shelter from the sun. Not something one would typically announce in a newspaper. A second result, exemplified by the Adventures of Captain Simon Suggs by J J Hooper (1845), and a 1901 St Louis Republic report (search for 'shade' on each link) suggests superiority, essentially a variant of "overshadowed" or "eclipsed". That also doesn't seem likely to be the subject of a newspaper announcement, at least not with contacts for "further particulars". The same applies to the idea of a fight, I think.

So I wonder if this is a now-obscure way of noting that J.P Martin had (temporarily?) released some men who worked for him, so that they could be contacted by other prospective employers. In this interpretation, "in the shade" would mean "not working", as opposed to "out in the sun" at work in the fields. This fits better with the rest of the clipping, which seem to cover recent or upcoming farm work.

On this website 'laid in the shade' seems to mean set aside/superseded by:

For many years the tillers of the soil were, of necessity, compelled to use such implements as came within their reach. The plow with wooden mold-board is within the recollection of many who were raised in our midst. The sickle and the scythe were suf­ficient for the amount of small grain raised, but as the acreage increased, the demand for something more expeditious was supplied by the introduction of the reaper. Mr. R. H. Robertson was the first to lead in this progressive movement, and in about the year 1845, bought and cut his grain with a McCormick reaper. Next year Mr. E. C. Clemmons followed the example. A. Boren and ohn F. Long soon after introduced one in the south part of the township. Flailing and tramping with horses soon gave way to the " beater," which was run by Wm. Stults. This was quite a relief to the boys who rode the horses from day to day, and bare­back at that, on a tramping floor not more than 30 feet in diameter. Our recollections on this point are very vivid indeed. The " beater " soon gave way to the improved thresher and cleaner; the wooden fork was not adequate to the task of taking care of the straw; the wooden plows were laid in the shade and the Stebbins and Modie plows took their places; the wooden harrow was not in keeping with the times, and the material from which it was made served for other purposes.

This seems in keeping with an interpretation that the three men named were 'laid off', but could also suggest 'overshadowed' or 'outdone'.

To put someone "in the shade" means you are better than them at something. They were "outclassed" or "overshadowed" in comparison to you.

Not the answer you're looking for? Browse other questions tagged united-states terminology newspaper kansas or ask your own question.