My 3rd great uncle Thomas Hitchcox (born 12 May 1837 and baptised 14 Jun 1837 at Brewood, Staffordshire) has been asked about in another question (Tracing police service of South Australian constable from 1855 to 1861?) and is a bit of an enigma because he lived in many places in South Australia and New South Wales, and although not yet confirmed, he may also have been a bigamist who changed his name to Thomas Cox and died in Tasmania in 1906.

Today I came across a newspaper notice in "The Express and Telegraph" of 28 Sep 1880: 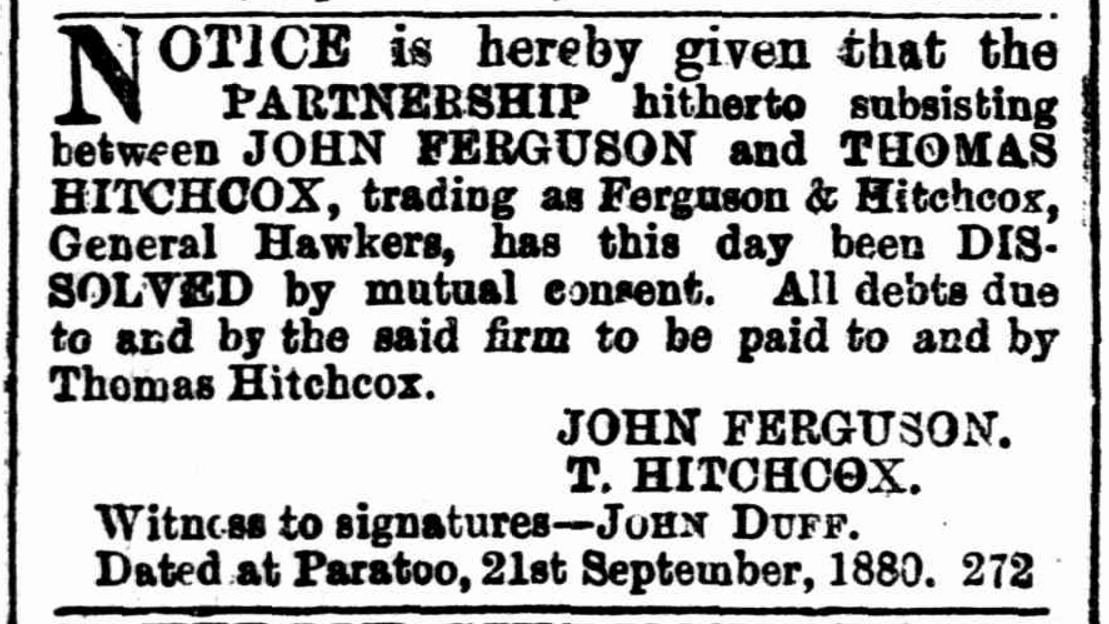 I think the Thomas Hitchcox mentioned here may be him.

Are there government records available for the registration, and dissolution, of businesses in South Australia around 1880 that might list a few details about those conducting them?

Intriguingly there is a Thomas Hitchcoy [sic?], draper, recorded at Terowie (less than 50 miles from Paratoo) in the 1882, 1883 and 1884 Boothby Directories, and the occupation of draper was recorded for Thomas when he arrived in South Australia at the end of 1854 and also on the 1869 birth certificate of his third son Henry Francis Hitchcox (at Hartley, NSW).

In between the above records the New South Wales Government Gazette (Sydney, NSW : 1832 - 1900) of Fri 17 Mar 1882 [Issue No.119 (SUPPLEMENT)] on Page 1553
has No. 6. LIST OF LETTERS RETURNED FROM THE COUNTRY, AND NOW LYING AT THIS OFFICE UNCLAIMED had an item "107. Hitchcox, T., Mount Browne". Mount Browne was a mining area in north west NSW much more easily serviced from South Australia (like Broken Hill) than Sydney. It seems possible that he spent time at Mount Browne in the period 1880-1882 too.

I have concluded that my 3rd great uncle Thomas Hitchcox (born 12 May 1837 and baptised 14 Jun 1837 at Brewood, Staffordshire) does not appear to have been a bigamist by comparing records that I believe can be attributed to him with those that I can attribute to another man named Thomas Hitchcox who changed his name to Thomas Cox and died in Tasmania in 1906.

I still welcome answers to the original question, but here I will try to show why getting an answer may no longer be required to answer whether my 3rd great uncle Thomas Hitchcox was the Thomas Cox who died in Tasmania.

The events that I attribute to my 3rd great uncle Thomas Hitchcox are recorded up to 1874 at Tracing police service of South Australian constable from 1855 to 1861? and a few later events can now be added:

The events that I attribute to the Thomas (Hitch)Cox who died in Tasmania are: 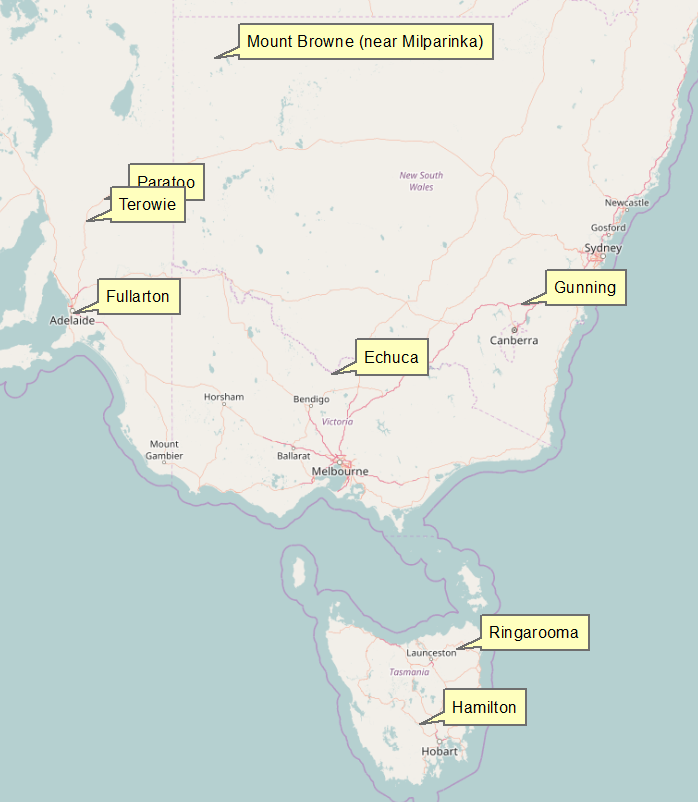 For the years 1879-1884 it seems unlikely that the same man could be a general hawker and draper around Paratoo and Terowie in South Australia, while at the same time fathering children at Gunning (NSW), Hamilton (Tasmania) and Echuca (Victoria).

Not the answer you're looking for? Browse other questions tagged south-australia 1880s 1870s or ask your own question.

1
Tracing police service of South Australian constable from 1855 to 1861?