Verifying facts and relationships given in 16th century visitations?

Owing to the fortuitous survival of various parish registers and wills I have managed to trace, with good certainty, one of my lines of ancestry back to one Margaret Bowyer who was born in approximately 1530. She was married to William Ford of the Mosse, Staffordshire, and when he died in 1584 his will notes several "brethren-in-law": William Boyer, George Boyer, and Thomas Boyer. The will of Thomas Bowyer of Stonelowe, Staffordshire in 1596 notes his sister Margaret Ford. Her brother William Bowyer, it appears, was an MP for Stafford, and his will proved in 1602, though it does not mention Margaret, does mention his sister Ellen Dorrington and some of his brothers. Margaret died in 1610 leaving a will.

These facts corroborate the evidence given in sixteenth and seventeenth century visitations. The Bowyers, these visitations suggest, had quite the illustrious pedigree being descended from the Knypersleys and Breretons. The Staffordshire visitations of 1583 (shown below) and 1614 support that Margaret Bowyer was the daughter of John Bowyer of Knypersley by Elizabeth Bucknall his second wife: 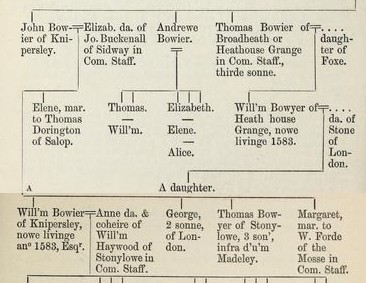 Apart from these visitations, I cannot locate any contemporaneous sources that verify that Margaret and her siblings were children of John Bowyer and Elizabeth Bucknall. The 1583 visitation was, of course, created during Margaret's lifetime, so one would hope that it is accurate with regard to her parentage, but the visitations are renowned for being a mixture of fiction and fact. The parish registers and wills are scarce by the period of interest. I cannot locate a will for John Bowyer, and he appears to have died before parish registers began (although I can find no verifiable date as to when he died). What sources – ideally primary or contempory sources – can be used to verify or refute that Margaret was the daughter of John and Elizabeth?

Elias Ashmole was an antiquarian and collector (among other things), whose wide-ranging interests included heraldry and genealogy. The Ashmolean Museum in Oxford was founded to manage his collection, which he bequeathed to the University there.

Google Books has a scan of "A Descriptive, Analytical and Critical Catalogue of the Manuscripts Bequeathed … by Elias Ashmole", which details the documents left by Ashmole. Section 1750, found on page 1477, comprises "Sundry genealogical papers", which include multiple pedigrees and other manuscripts concerning the Bowyer family.

Since Ashmole lived 1617-1692, any of his own works won't be concurrent with the Bowyers mentioned in the Visitations, but they may be drawn from, or even incorporate, relatively contemporaneous sources.

The Ashmolean Museum presumably still keeps these documents, assuming they have survived, so a query to the museum may be worthwhile.

Not the answer you're looking for? Browse other questions tagged england 16th-century staffordshire gentry or ask your own question.

7
Source data that establishes the link between two "brothers"?
3
Locating Manorial Records of 1843-9 Copyhold by William Hitchcox in Wheaton Aston, Staffordshire, England?
3
Were nephews and nieces sometimes referred to as cousins in 18th century Cornish wills?
3
Relocating christening record for Margaret Morgan, believed to be 1808 at St James, Bristol, England?
4
Who was the father of Thomas Jocelyn/Joslin who emigrated to Massachusetts in the Increase (1635)
10
Who are the parents of George Juden?
3
Meaning of term "died leaving with other issue"?
4
Finding source of father's first name on 1713 Staffordshire baptism from FamilySearch index?
6
What can I deduce from this newspaper extract?
1
Dating entry in Collections for a history of Staffordshire