Why would relatives in Massachusetts cross New Hampshire border to be married?

I have been doing some genealogical research, and have stumbled across an unusual scenario. Several relatives, between 1930 and 1960, traveled from Lawrence, MA to Windham, NH to be married. As far as I know, there is no connection between the relatives and anyone in Windham, or even the town itself. There is nothing to suggest there was any haste in getting married, or any impediment in Massachusetts law. Any idea why several couples with no connection to Windham would travel there to be married?

In the comments on the post Have you searched and searched for the marriage without finding it? by Arlene on Arlene Eakle's Genealogy Blog, a comment posted on February 14, 2012 at 6:05 pm by annamadori says:

I helped process and index many of the marriage records for Fredericksburg, Virginia. We were amazed at the time that the number of marriages from about 1938 until mid 1941 was so much greater than in previous years. Several years after the index was completed we found newspaper articles from the Free Lance Star for July 31 and August 1, 1941 that solved the mystery. In 1938 laws took effect in Maryland and other eastern states requiring a waiting period before marriage. On Aug 1, 1941 a similar law took effect in Virginia. People came from up and down the eastern US and as far west as Ohio.

You've ruled out differences in state law as a motive for your relatives' marriages, but it would still be interesting to know if there is a spike in marriage records for Windham during this time period. Knowing (and being able to cite) the laws for each state during the time period could back up your assertion that there was no impediment for the marriages to take place in Massachusetts.

I asked for directions between the two towns on Google Maps and got this result: 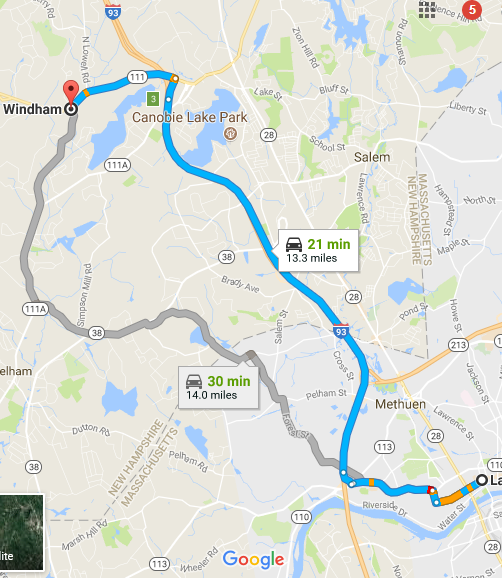 Another possibility is that the nearby Canobie Lake had a venue which became popular for destination weddings. If you can find ephemera from the period or period newspapers or magazines, you might be able to find some clues.

As someone from Massachusetts, that got married in New Hampshire it might not be laws or anything like that. It might be a spot that they found and liked, like I had. The fact that it is really easy to drive anywhere in NH from MA in a matter of hours is a factor as well.

In fact, my cousin from MA is getting married at Searles Castle in Windham in about 2 weeks. It is very likely this is the where this marriage took place as well.

Not the answer you're looking for? Browse other questions tagged 20th-century marriage-records marriage-practices massachusetts new-hampshire or ask your own question.

8
Migration route from New Hampshire to Ohio ca1810-1816?
9
What does the term "Intervale" mean in the context of New Hampshire land transactions and deeds?
6
What port or border crossing would immigrants to Minnesota likely have used?
7
Finding Devon parish marriage records?
4
To what extent would people in the 1800s travel to get married?
4
Why would people have to pay marriage licence bonds?
1
Identifying parents of Orrin Badger who was born 1802 in New Hampshire, USA?
3
What does C.N.B.L. on New Hampshire death certificate mean?
2
New Hampshire Poor Farm Records
4
Understanding why same couple seemingly married twice within year