I am having a difficult time understanding everything and quite frankly am overwhelmed with the thought of the "possible" outcome I am facing.

Recently, on my quest to find answers my "aunt" who would be the sister of the man I thought was my dad, wanted to help me out and we both did a DNA test through Ancestry. This would be my second DNA test as I have also tested with FTDNA.

The results from Ancestry are that my "aunt" and I share 1838 centigrams over 67 DNA strands. Ancestry predicts we are close relatives..

She for sure is not my grandparent, it is unlikely she is my 1 cousin, and given the blood typing of the man I thought was my father and who was the only son, she can't be my aunt... so that leaves half sibling.

I have since uploaded both my raw DNA data to GEDmatch. She doesn't know yet that the results are in,as far as I know, I plan to call her very soon...But needed to know if I was on the right track. and if she agrees to uploading her DNA data to DNA Match would that offer definitive proof, or do I have it already?

I am still numb from this information, though totally not shocked. I just need confirmation or direction.

Firstly, let's talk about blood. You are totally right that there are possibility for you with AB blood have father with O blood. But I can guess that there is error in determing the blood type, because the human's blood typing is more complex and the AB-system with rhesus is the simplest approximation. Please read very exciting article about the man with the golden blood

Because your mother and the man who stated himself as father don't want to help and don't make the situation clear, I think that there is skeletons in the closet and there is something that worth to be hidden.

Maybe it is the information about your father or something weird that happened in family. It is not the catch.

Let's talk about your aunt. There are two metrics that helps us to guess the relation: it is the total of shared segments (in cM) and the maximum shared segment. The first metric is more important for close relatives (like parents, grandparents, siblings and so on). The second - for the far relatives, because there is strong correlation between the distance to your common ancestor (or, to simplify, how much persons are between you) and the largest segment. Also we must take into account that you may be related with somebody in multiple way (because it was ok to get married with 2nd cousins or more distant relatives and people didn't move much around the globe and preferred to stay in one place). Also there is a lot of graphs showing the relation between the amount of shared DNA and the probable relationship degree. For example, 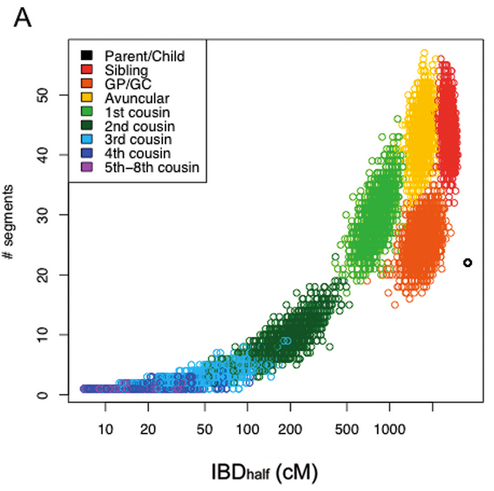 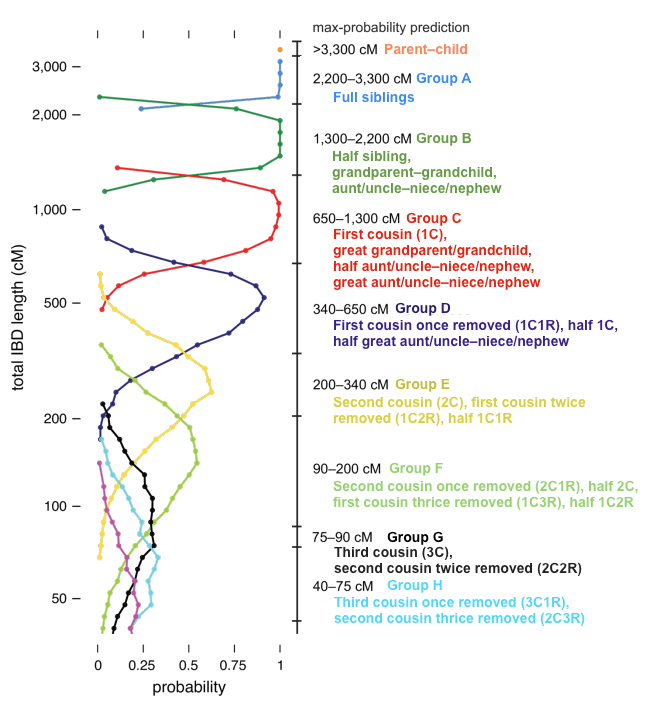 All these graphs tells us that there is great overlap between different relationships grade. These graphs are for regular situations when one's parents are not related. Please take all information with the grain of salt. I want to emphasize that amount of shared DNA can vary in wide ranges. Look how groups are overlapping on graphs!!! So nobody can state something for sure without additional information (like tests of other persons, "paper" genealogy clues and so on).

In your case, 1838 cM match perfectly fits in Group B, so it is very probable that your aunt is your real aunt.

I have a situation or two where I'd like to use the graphics above. The most important is finding my father's unknown father. I've taken auDNA test (ftdna.com) and done a gedmatch. Thus I have proof that my paternal gf whose name was not on Dad's birth record in Germany in January 1907 was at least part Ashkenazi Jew. In that era, that fact might have been dangerous for my GM and her new son. So something kept your relatives from stating facts.

Through the auDNA test I found: A family of three who are related to me, a mother with alzheimers, her daughter, and the mother's brother. The mother and her brother have passed now, in their 90s, but I met them all --a great satisfaction to me and to at least one of them. My Dad never knew he had living relatives anywhere. The daughter of that family made an extensive family tree and that gave me some facts, but I cannot connect my dad's line to theirs: there is no KNOWN link. I have intuited that the man (student, hopefully) who impregnated my gm when she was 16 was at least part Jewish. He'd have spoken German, and was probably a resident of either Karlsruhe or Frankfurt, Germany.He's part jewish, not 100%, because my DNA which started at 31% Ashkenazi has been reduced by ftdna to 20%, which was closer to the "norm" (25%) for a grandfather, I think.

I have extensive information from an archivist in Karlsruhe to fill out my father's tree, but I do not have and can't get the missing man's name. I may be able to find more information (but not his name) at Frankfurt's archivist. My gm at 16 lived with her family until her mother and brother died. She went to Frankfurt to give birth. I don't know much more, but the poor scared girl felt she had to escape motherhood and Germany, so she left her child with her maternal grandmother. She called for him 4 yrs later, when she felt "settled."

If you start to piece together your aunt's story through, say, her photo book and really listen to what she says, you might be able to piece together a narrative from her or your long-held "father." But please don't forget to search official records offices and get the details that are solid. Emails are good because they feel safe in writing them, and they can be good sources when you've forgotten something. It's all work, and it takes a good long while.

2
Reconciling DNA results against what is known of father's (half-German) ancestry?
10
Is a half-sibling match on AncestryDNA reliable, or is more testing needed?
5
Is DNA match between two parties that ought not be related by "blood" possible?
2
Explaining DNA mystery of unexpected 1st cousin?
2
Is this a half niece/uncle relationship vs 1st cousin once removed, or something else?
0
DNA results for half sibling
2
Is DNA match 1st cousin or niece?
1
What would the cM range be for persons sharing the same mother and the fathers are brothers?
0
DNA half-sibling
1
Assessing likelihood of incest using AncestryDNA results