Deciphering part of 1799 probate from USA?

In the numbered parts (which I've highlighted) of the probate for Joseph Eayers pictured below: 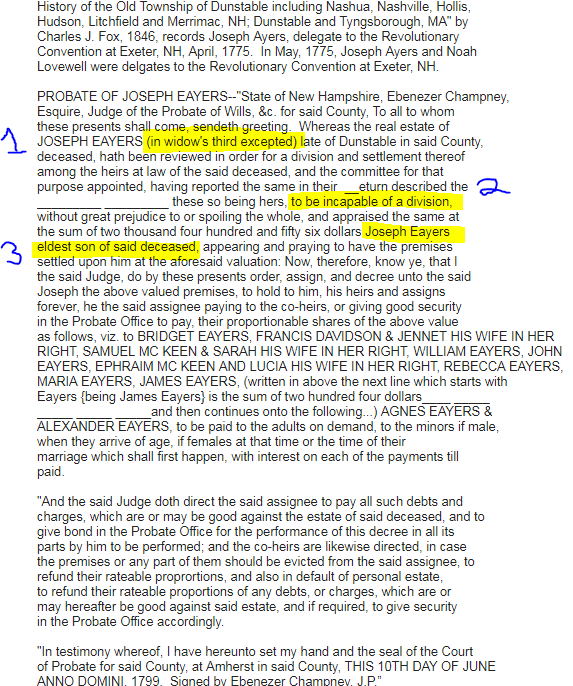 It may be worth noting that this document is not actually a will. It's a probate document, which describes the distribution of estate according to a will, if there was one. Probate can take a while, if there are complexities such as division of real estate, which may explain the delay you mention. It's not clear from this if Eayers left a will or not, but I would guess that he did not, hence the allocation of the "widow's third" and calculated distribution among the children.

Not the answer you're looking for? Browse other questions tagged united-states 18th-century will or ask your own question.

0
Tracing ancestors from 1800 back in Kentucky/Tennessee (USA)?
2
What happens when a last will and testament enters probate?
1
Seeking parents' names for Shadrach/Shedrick Montgomery, born 1790 in Chester, Pennsylvania, USA?
7
Getting information from closed mental institution in California, USA?
5
Are probate records typically only for males?
4
Reading marriage bond from 1838 Kentucky USA?
7
Unknown Abbreviations in abstract of probate
1
Could Francis Tolvert Greenway baptised 1774 at Falmouth be Francis Green who married Grace Woodley 1798 at Totnes?
3
Why were Bondsmen shown for 1717 Probate Letters of Administration?
3
Widow's probate in 18th century US?