What does "Int. Reads" mean on list of marriages from around Boston about 1794?

Looking through a list of marriages in the Boston, MA area around 1794 and I see on most marriages there's a line that reads "Int. Reads" below the couple. It seems to be correcting there names or have an alternate spelling?

It's important I get the most correct version of my family's name so I am curious which one is more correct spelling wise? 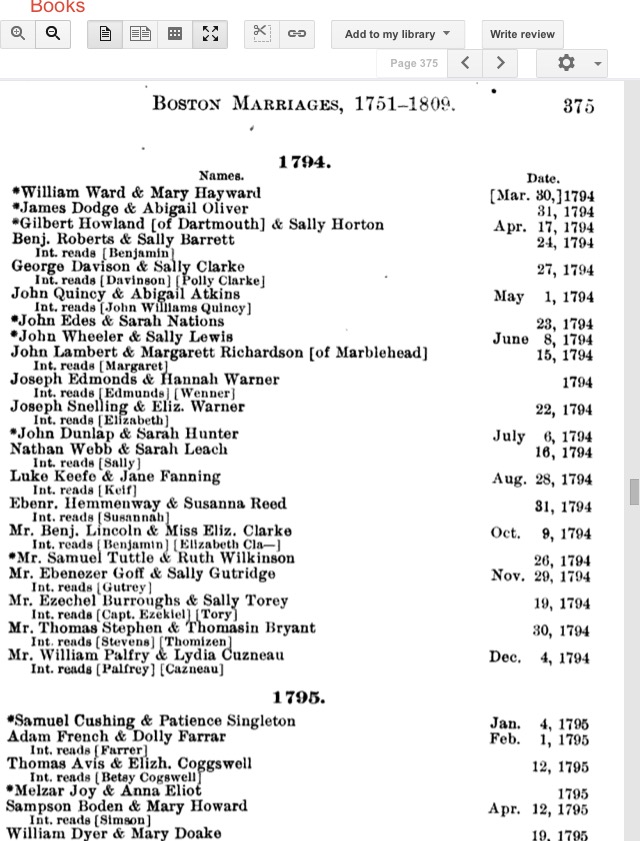 I believe that this refers to the Intention. At that time, the couple wishing to be married would file an intention to be married. This would be published in the home town of both sets of parents and in the town the couple lived in. If there was no objection from the community after a given period, they could then get married.

Engaged couples are required in many jurisdictions to file marriage intentions in their towns, cities, or counties of residence. After a waiting-period prescribed by law, the intentions may be certified—i.e. a marriage certificate may be issued—and a religious or civil ceremony may legally occur. Intentions were once published in a very public way, by placing notices of impending nuptials on the walls of stores, post offices, schoolhouses, or taverns. Intentions could also be taken down or forbidden—perhaps by the parents of an underaged girl, or a previous spouse alleging bigamy.

When they were married, a marriage license was issued and recorded by the town (or sometimes recorded by as many as three towns [their town and one for each set of parents]). The image you linked seems to be a transcription from the actual marriage licenses. Where it says "Int. reads" I believe it is indicating that the associated marriage intention uses a different spelling of the name, a nickname or an abbreviation of the name as compared to the marriage license itself.

The "Int." refers to an "Intention to Marry", a declaration made before marriage that a couple intends to wed. As Jack explains in his answer, such "Intentions" were made public (in smaller communities often by being read out loud in church) several weeks before the wedding so that any problems (such as one person already having a spouse) could be uncovered.

For books like the Boston Marriages volume shown in the question, it is often helpful to look for explanations in introductory material at the front of the work. In this case, page v. has this:

From this we can interpret entries like "Int. reads [Benjamin]" as meaning that the Intention document associated with the April 24 marriage spells the groom's first name as "Benjamin", whereas the marriage record itself instead reads as "Benj."

Not the answer you're looking for? Browse other questions tagged 18th-century marriage-records massachusetts or ask your own question.

6
Finding out more about Haynes, Sparrell & Co letterhead from 1901 in Boston?
21
What does three small rings in a triangle mean in a Swedish parish registers?
6
Finding Devon parish marriage records?
5
What does huba mean in this Polish Catholic marriage record?
3
What does NFP RC mean in marriage record of Virginia 1799?
6
Correlating military and civil records for one or two individuals
4
What does Orring County North Carolina mean in Quaker records?
4
Was Daniel Rich (Jr.?) the grandson of Jacob Rich? Or, the confusing case of Daniel Rich (Sr.?) and Nancy Marshall
2
What does "care of" mean in the 18th century with respect to letters?
1
What does branobilis/braenobilis mean?