My 76 year old widowed neighbor has expressed some interest in locating her father's service records. He flew in the Luftwaffe and was shot down in late April 1943 and was listed as KIA. This is all that she knows about his passing.

I am ready and able to help her all that I can but I have not had too much luck during my initial search for Luftwaffe records. The German Embassy has not responded to any of my three requests so I sure hope that you can point us in the right direction. She was 2 1/2 years old when he died, but did not emigrate to Canada until 1965, so she speaks and writes both English and German languages very well.

I have included a photo of some sort of registration card. His name is Ogefr Walter Schumann. 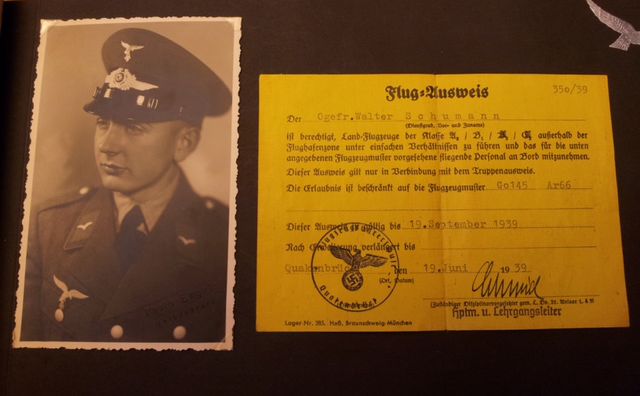 The service record should be available from Deutschen Dienststelle (WASt). This is your primary source for this kind of requests. Please see details for making a request here: Finding information on German soldiers from World War I and World War II?. Your neighbor is entitled to make the request. On the form (https://www.dd-wast.de/en/tracing-request/private-matters-research.html) she should pick all options as “purpose”. If you have questions, simply add them as a comment to my answer, I am happy to help.

I did not find him on this private site: Luftwaffe Officer Career Summaries, but he is possibly listed here as missing in action near Bou Arada (Tunisia).

The document you included is a certificate stating which planes Walter Schumann was allowed to fly.

Not the answer you're looking for? Browse other questions tagged germany military-records or ask your own question.