My great-great grandfather Richard M. Dugdale was a machinist and engineer. During World War One, he was employed by the Remington Arms Company in Ilion, NY. I believe he started working there in late 1915 or early 1916 and he left before 1920 to work at Farrington Manufacturing in Massachusetts.

My understanding is that he was in middle to upper management at Remington. I have a newspaper article from the Utica (NY) Herald Dispatch from March 26, 1917 that reads:

R. M. Dugdale, supervisor of Departments 66 and 67, was presented a diamond stick pin by Donald Wright in behalf of the men employed under Mr. Dugdale. The recipient of the gift responded in an appropriate manner.

Family legend has it that R.M. was involved in the design of a pistol while at Remington, which, based on the timing, must be the Model 51 (or possibly the prototype Model 53). However, his name is not listed on any of the patents for that gun and I have not found any patents for him from before 1920. After leaving Remington, however, he did receive 24 different patents while at Farrington, including those for the Charga-Plate (early mechanical credit card, basically), so he definitely was capable of being involved in design.

How can I track down more information about what his employment entailed? What did departments 66 and 67 do at Remington?

Regular Google searches have turned up nothing. I tried contacting Remington directly but I never heard back. I also posted a similar question on the Remington Society forum (question here: http://www.remingtonsociety.org/forums/viewtopic.php?f=22&t=24215&p=44561&hilit=dugdale#p44561) but never got any responses.

Well, I don't have a full answer to my question, but I do have a partial answer thanks to some impressively fast research by a coworker.

It turns out, Department 67 was the department that made Remington-branded typewriters, and Department 66 appears to have made typewriters to sell to other companies so that they could rebrand them. 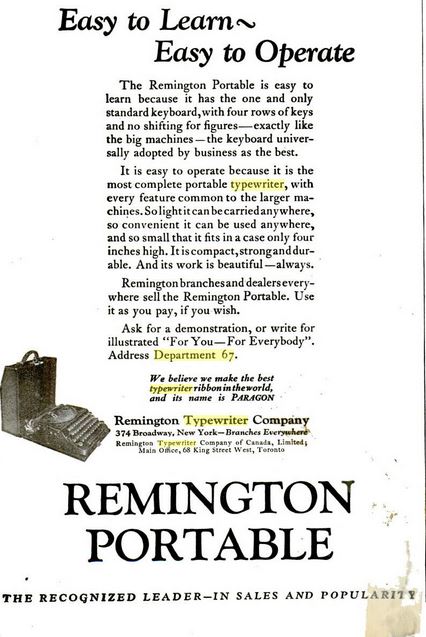 While I did say that R.M. worked in the arms division in my original question, my Dad had also been told that he worked in the typewriter division as well, so this information fits. However, we know for certain that he did also work in the arms division. I just can't find any information about it. So I'm not going to accept my answer to this question, in hopes that someone else might have an answer.

Not the answer you're looking for? Browse other questions tagged united-states new-york-state world-war-1 employment-records or ask your own question.