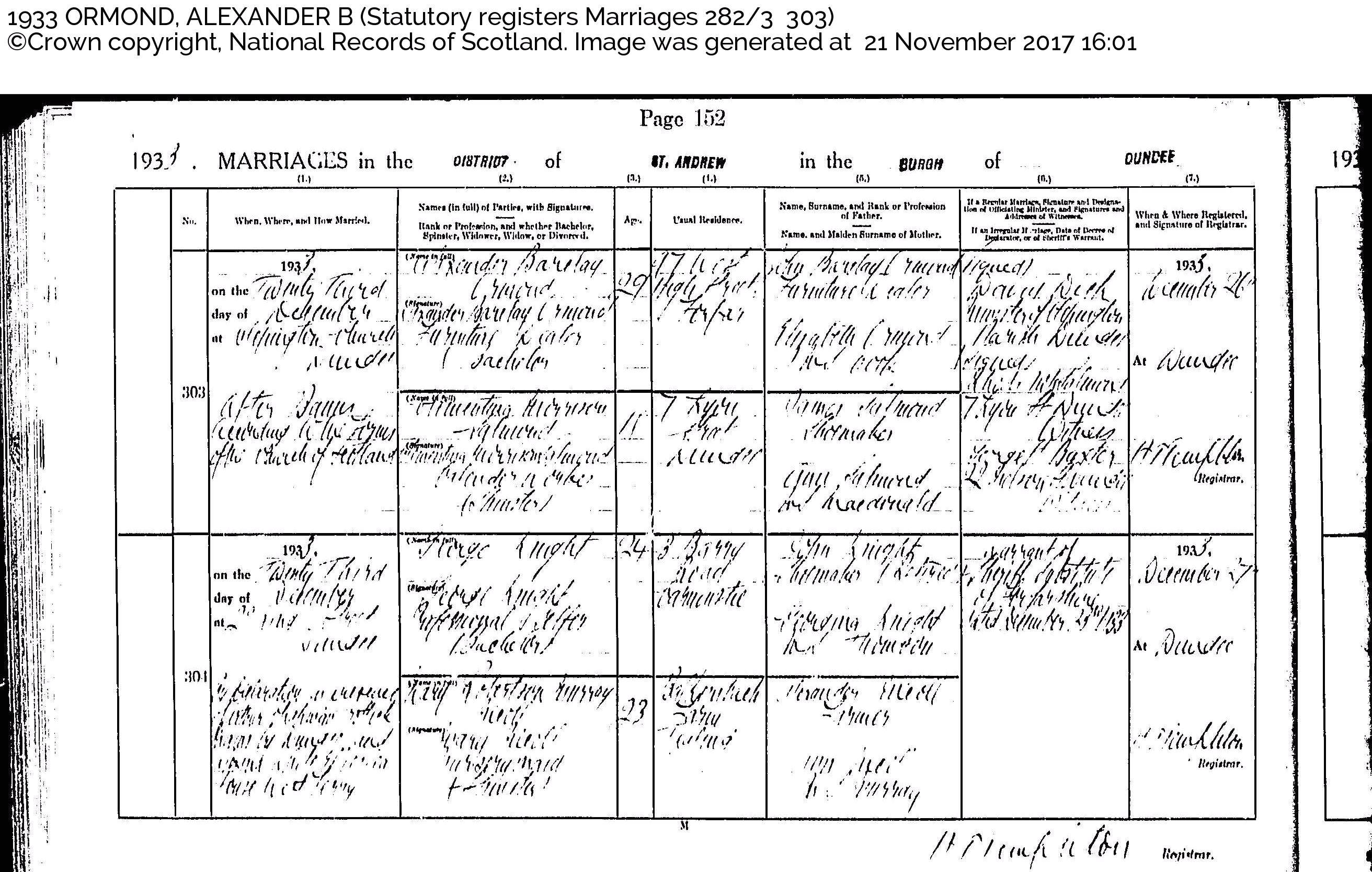 I recently started using Scotland's People, and the first article I am looking at is here and I find it completely illegible, perhaps due to scanning.

Can anyone help me to read the information in the top entry for the marriage of Alexander Barclay Ormond?

This is probably going to take a bit of work. In general, it's best to start by trying to identify letter and word shapes according to what you know, and what you expect to be there, then move onto the unknowns.

So you know you must have "Alexander Barclay Ormerod" somewhere, and that's actually fairly clear at the top of the second column. Other parts may be common - the lower part in the first column, I think, reads "After Banns according to the forms of the Church of Scotland", which appears to be standard wording in Scottish marriages.

In small steps like that, you can build a small "dictionary" of words using the bits you can be confident of, and that should help identify unknown sections by matching or eliminating likely words.

And don't ignore the other records on that page (and in that set, if available). Anything written by the same hand could help clarify the records you have, so look around for similar patterns. For example, "Dundee" in the "At" field of the rightmost column is much clearer in the lower record than in the upper one, but it is surely the same word in both.

Also look at better-defined scans of Scottish marriage records of the same era, if you can find them, to identify some more common text segments.

Try to decipher what you can like this, and then come back if there are any specific parts you still have trouble with.

Not the answer you're looking for? Browse other questions tagged marriage-records scotland images palaeography or ask your own question.

16
Determining what old document with Illegible handwriting says?
8
How can I process this image to extract more of the information

16
Determining what old document with Illegible handwriting says?
7
Techniques for reading poor or illegible images?
4
Locating information on John Megone from 1800's Ireland
2
Finding where a marriage took place from the GRO index reference?
2
Were Scottish middle names sometimes added later? Eg. Campbell
1
What does branobilis/braenobilis mean?
4
Who did Emerich Braunschweig marry?
4
Understanding why same couple seemingly married twice within year
4
How to enhance digital images of partly damaged documents (German church book from 1657)?
1
Where would Büchenan have been in Thuringia in 1730?