Why does death record from 1872 in England not contain parent details?

I have a death record from 1872 in England and all that is written is name, cause of death, where, and a witness.

There is no information as to who the parents were. This is not a huge issue as I know who they were anyhow but would have like to have more data on them such as whether they were still alive as I am struggling to find out this info.

Is this typical of records for this time period in England not to have information of parents? I have seen one in Scotland from 1857 for a different person that has information on parentage.

Death certificates in England and Wales did not include information about the parents of the deceased: 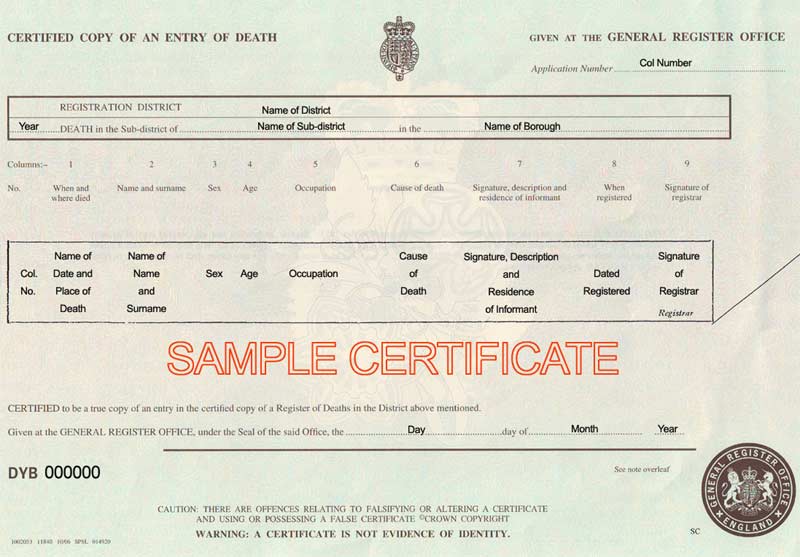 The situation in Scotland is different, and information about the parents of the deceased is included (provided that it was known to the informant).

As @sempaiscuba's answer states, parentage information was not normally included on death certificates in England and Wales. There are, though, at least a couple of situations where one or both parents might be identified.

The GRO has some handy little guides to the information shown on standard Birth, Marriage and Death certificates here.

The guide to death certificates has notes for the "Occupation" field:

This will be the last known occupation of the deceased.
Females were usually recorded by their relationship to husband or father - e.g. 'widow of'.

Additionally, for the death of a child, the "Occupation" field may include the father's name, such as in this example:

You may also find that the Informant has a described relationship to the deceased (mother, daughter, widower etc). This is not always the case, but the GRO notes that such relationships were recorded as standard after 1875. In the example above from 1858, Ann Hill is almost certainly Emily's mother, but is not described as such.

Not the answer you're looking for? Browse other questions tagged england death-records parentage or ask your own question.

10
Why did my Uncle's Death Certificate Not Appear in the Family History Library's Archives?
6
Finding New York City/State records relating to Sellars family (British subjects) births/deaths mid 19th century?
6
How to find death record from late 19th century New York (State)?
14
What records might be created in England when people are re-interred?
3
Interpreting comments and abbreviations on death record abstracts
6
Could a beneficiary also be witness to a will?
1
Seeking info on merchant marine who died at sea mysteriously in 1952?
3
Determining cause of 1958 death in England?
6
Cause of death on an 1871 British Death certificate
3
Deciphering names from Spanish death certificate