Is it normal to be baptised on same day as birth? 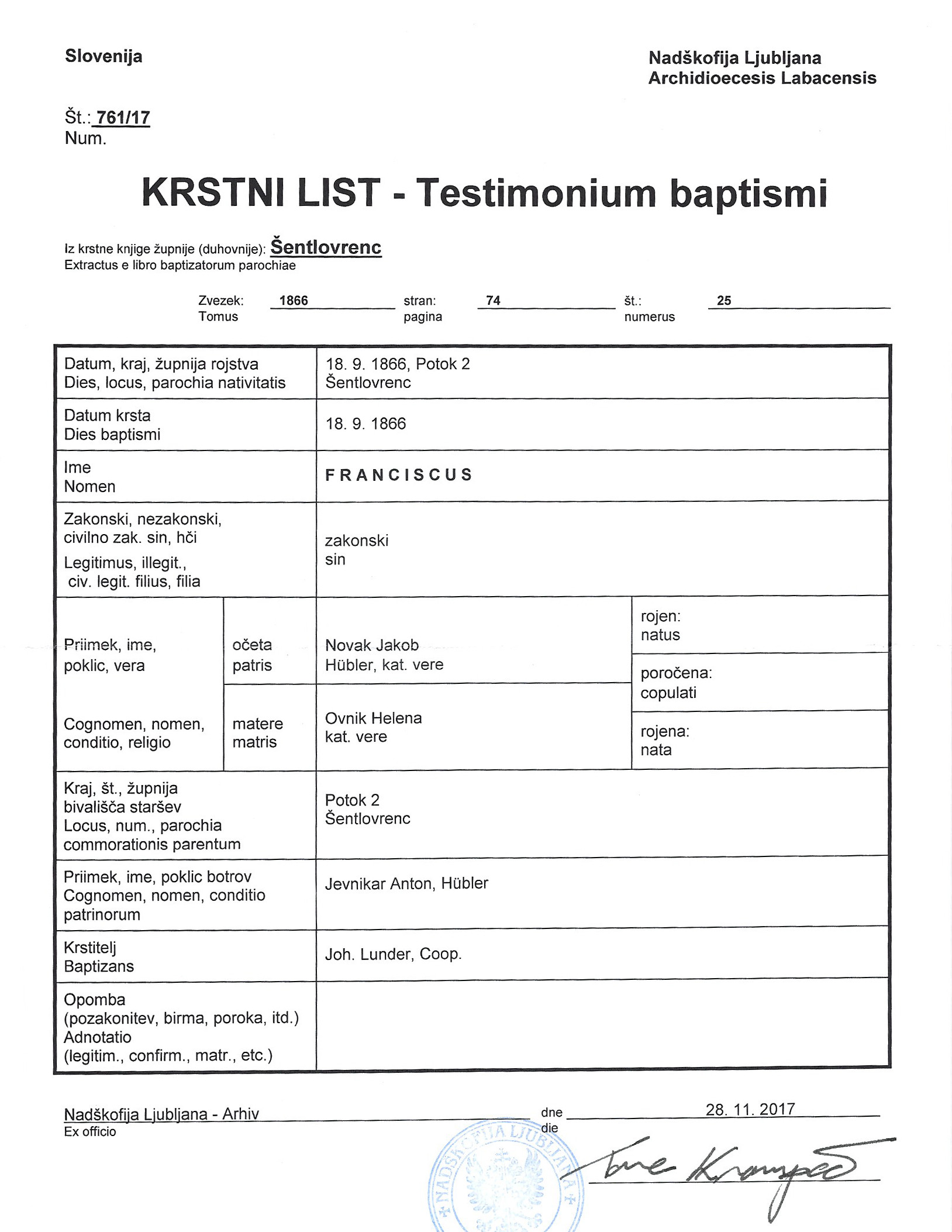 Is it normal for this time period to be baptised on the same day you are born? Alternatively, could the record just not have exact day, possibly two days earlier as I've seen for several others, that he was baptised?

In the Diocese of Gurk just adjacent (north) to the Diocese of Ljubljana it was also quite common that newborns were baptized on the same day from what I saw when looking at the church records there. When birth and baptism hours were clearly indicated it showed that often baptism happened within 12 hours after birth (e.g. born after midnight and baptized in the morning or early afternoon). It was customary that the midwife brought the baby to the church so the mother wasn't involved in the process.

I also share the view of @JPmiaou that it was that customary to happen on the same day that both dates often weren't even indicated in the records. However, I wanted to go a bit beyond reports from experience and show a few numbers from my own research. In the diagram below you find the mean timespan between birth and baptism of 190 individuals in the 17th, 18th, 19th and 20th century in the Diocese of Gurk (Carinthia, Austria). Since most parishes are from Upper Carinthia this is in no way representative for the whole dicoese. Don't attribute too much to the mean as only few individuals share the same birth year.

It is important to differentiate between calendar days and difference in hours. Even when baptism might have happened on the next calendar day after birth when taking into account the time of birth mostly baptism happened within the first 24 hours after birth. For individuals baptized on the same calendar day I only selected those where I was certain about it. I obtained this certainty either because it was clearly noted in the record or if one of birth or baptism date was omitted I found a clear remark in nearby records when birth and baptism weren't on the same day.

I had to use a little trick to show mean values of 0 in the bar plot so I assigned values of 0.05 to them. 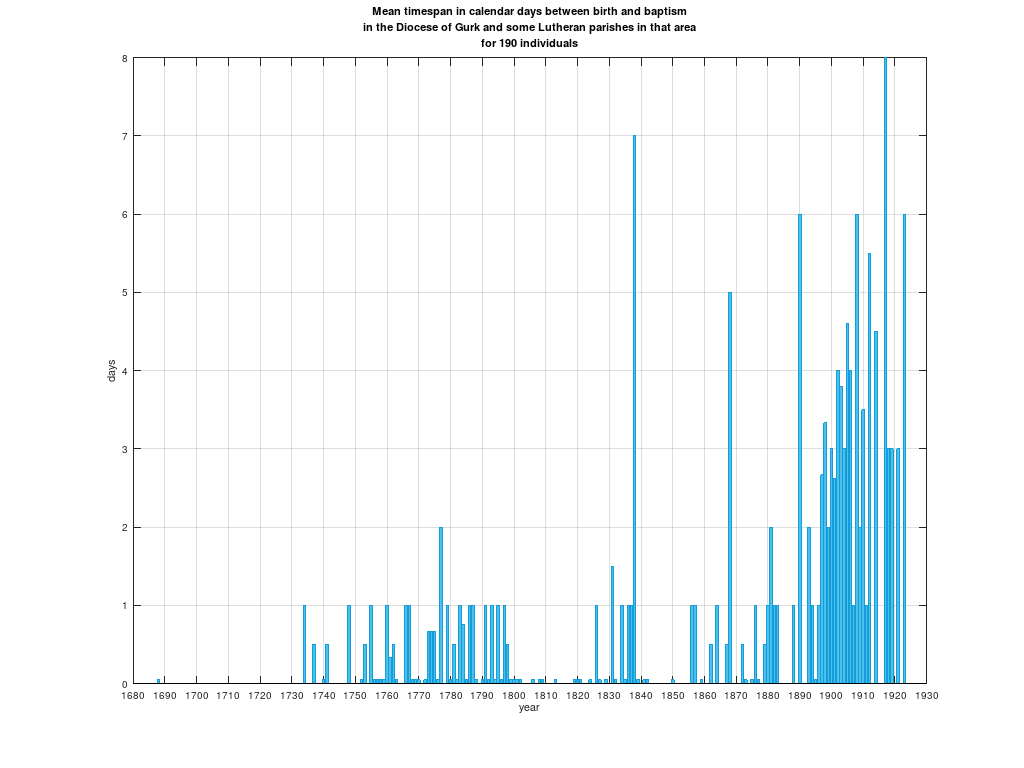 Maybe a more useful information according to the question is also which percentage of the above described individuals was baptized on the 0, 1, ... day after birth. The following diagram shows that. 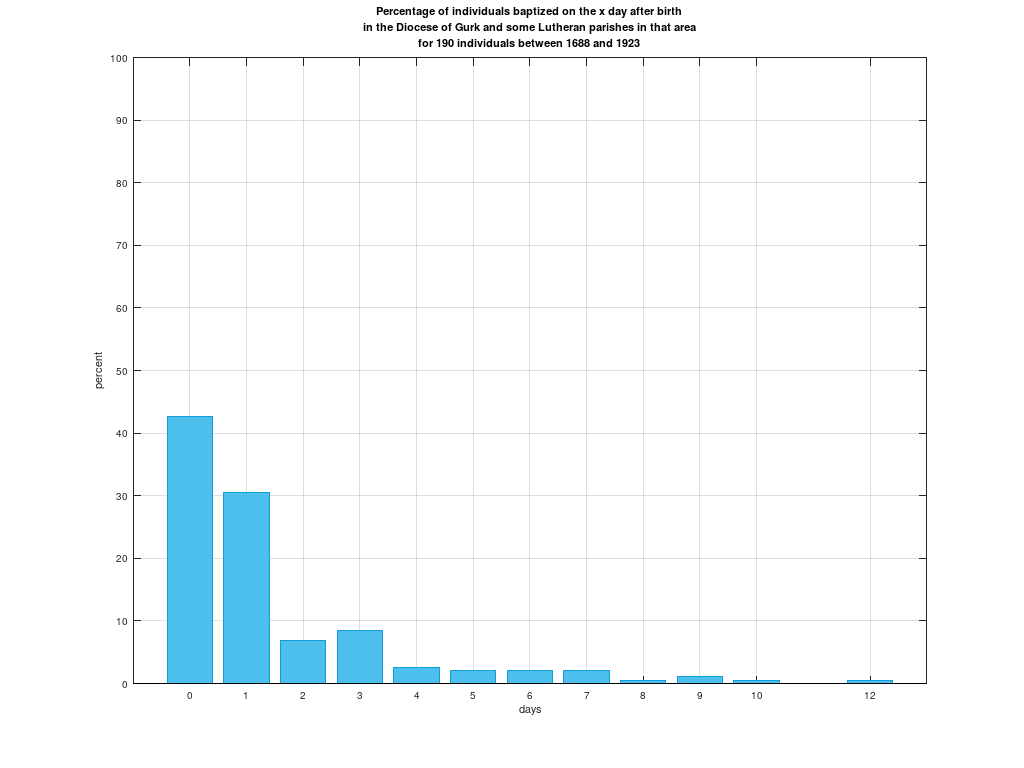 Since the baptism record transcript has a field for birth date as well the baptism date, probably THIS child was baptised on the date of birth.

At this point, you probably have seen a wider range of examples for the region and time-period in question than anyone else here. You could create your own analysis. See Average time between birth and baptism in the Church of England? for an example.

Addendum: According to FamilySearch Wiki, Slovenia Civil Registration did not start until 1868. Anyone born before that would be dependant on church records for official documentation of their birth. If the baptismal record did not include the birth date (and they sometimes did not), the baptismal date would be assumed to be the birth date.

In my investigations in Spanish catholic records I found that the difference is on the order of 1 week. And, when baptism occurs at the same day or the day after is very often (around 80%) a clear signal that the baby was born dead or died that day or the next one.

If we think a similar behaviour might happen in Slovenian church I would recommend to crosscheck the dead/burial records to confirm that the baby did not die.

Crosschecks also to mention are to check is the same couple had another child with the same name later on (a common practice in the past after the death of a child) and to confirm there is no major christian celebrations in the coming days after the baptism (like Easter or local celebrations) which sometimes led to early baptisms.

If that was an English registration I would suspect a very sickly baby that was not expected to survive long enough for the usual gap to baptism and the priest was called to ensure the child's soul didn't go into purgatory.

7
Average time between birth and baptism in the Church of England?
9
How soon after birth would Roman Catholic baptism normally occur in early 18th century Germany?

8
Why was Flossie baptised twice (1898,1903) at Stalbridge, Dorset, England?
7
Finding the Fatherless Feathers
5
Looking for info on Patrick Keelin, my elusive Irish ancestor
5
Was it common for parents to baptise a baby/child if they knew he was sickly and likely going to die soon?
2
Why did many 19th century death certificates list age in years, months and days?
5
Looking for birth record of Catherine Jones in Llanfynydd, circa 1882
3
What are the names in this Status Animarum from Slovenia?
4
Would a deceased father be named on his child's baptism record?