Interpreting where Informant was when 1908 Death on NSW Certificate occurred?

I suspect that my 2nd great grandfather Robert John Steven Sellers was the uncle named in a newspaper report (Geelong Advertiser, Tue 31 May 1910) about the divorce of his wife's niece Lesley Baylis Cradick (nee Slight): 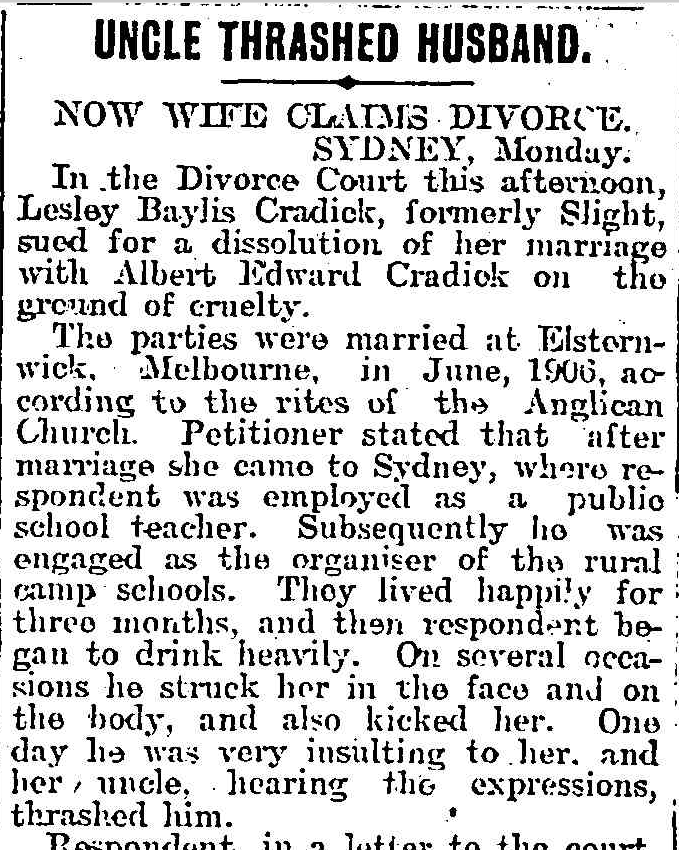 I suspect it was him because he is the only one of Lesley's uncles, who I believe all lived interstate or overseas, who is known to have visited Sydney, where Lesley lived, between the time of her marriage in 1906 and the filing for her divorce in 1909. Robert John Steven Sellers lived in Adelaide from 1878 to 1908 but died in Sydney on 18 Jan 1908, 14 days after taking leave from his work and arriving in NSW.

I have always assumed that he was with his wife, Elizabeth (nee Slight), and on holiday, but my late mother always said that "people just did not go from Adelaide to Sydney for a holiday in those days", and she suspected that there had to be a family reason for going". I always assumed that Robert was there with Elizabeth, and that Elizabeth would be the Informant that I found when I eventually ordered his Death Certificate. Yesterday, I received his Death Certificate from a registration on 21 Jan 1908 in Sydney and the Informant was recorded as his son Campbell Sellers (12 Canterbury Road, St Kilda, Melbourne, Victoria).

From a page All About N.S.W. Death Certificates:

The Accuracy of a Death registration depends on the informant. If the informant was not a close family member (and even sometimes when they were!), it is quite possible that the information on the registration may contain incorrect information. The householder of the house in which the deceased died was responsible to register the death.

Robert died in Sydney Hospital on 18 Jan 1908, from cardiac arrest after being treated for 1 day (from the Death Certificate), and our family story is that he dropped dead on the street on a hot day. Since he did not die in a house, is it a reasonable assumption to make that Campbell must have been with him in Sydney?

Lesley's wife beating husband Albert Edward Cradick was a Boer War veteran, and Robert's son Campbell joined the Scottish Volunteers on 31 Jan 1900, so he may have fought in the Boer War too. In any event, I am now entertaining a theory that Robert (from Adelaide) and Campbell (from Melbourne) may have decided to meet up in Melbourne and travel to Sydney to see what was going on in Lesley's marriage.

There are three items in the NSW Archives about this divorce but they will be expensive for me to get copied, and even more expensive to view in person. Although I suspect they will yield the information I seek, I am hoping to learn more before committing to that expenditure.

The drawing staff of the Surveyor-General's Department (says the "Public Service Review" has sustained a severe loss in the sudden death of Mr. Robert Sellers, who had scarcely passed the prime of life. He was away on leave in Sydney and dropped down in the street during the recent oppressive weather in that city, heart failure being the cause. He was an enthusiastic cyclist and baseball player of robust and active habits, and greatly interested in all outdoor sports. He left a widow and grown-up family. He had been in the Government service nearly 39 years. (Home Newspapers & Gazettes Browse Chronicle (Adelaide, SA : 1895 - 1954) Sat 8 Feb 1908 Page 45 OBITUARY. from https://trove.nla.gov.au/newspaper/article/88283271?searchTerm=robert%20sellers also

I think you may be making assumptions.

Your mother is right, people would not travel over 1,000 km back then for a holiday.

Sadly, wife beating was more or less the norm back then and may not have attracted any concern from other people, even in the family and women mostly got blamed for being beaten!

Are we sure the father and son were actually together in Sydney when Robert died?

Father and son may have gone to Sydney on an entirely unrelated matter.

There would have been no need for his son to have been with him at the death in order for him to register the event later.

I don't think you can assume that Robert and Campbell were together.

According to victorianrailways.net, which has a 1905 rail timetable example, a typical Melbourne-Sydney journey was around 24 hours, starting at 6 am.

If Campbell were informed in Melbourne of Robert's hospitalisation on the 17th or death on the 18th, he could just about feasibly have travelled to Sydney in time for the funeral on the 20th and certainly in time to register the death on the 21st. So you can't assume that he was in Sydney already.

(Actually arranging the funeral is another matter, though. Campbell may not have had time for that if he 'rushed' over from Melbourne, so perhaps he was already there, or Elizabeth arranged it, or Lesley, or someone else. I'm not sure if any records of that would exist, but it might be worth a look.)

Not the answer you're looking for? Browse other questions tagged death-records 1900s-decade new-south-wales or ask your own question.