I have several birth, marriage, and death certificate numbers from New York City.

How do I cross-reference the corresponding FHC File #?

To learn more about birth, marriage, and death records for New York City, start at the FamilySearch Wiki's article on New York City genealogy. The section on Vital Records gives an overview of what records exist and where the originals can be viewed. The overview is broken down by borough and has links to the relevant FHL Film numbers.

For an example, let's say that you have a certificate number from Manhattan, which you've located by using the Index to deaths, New York City, 1888-1965. The certificate is dated before 1919 so you want to look at Manhattan death certificates, 1866-1919. The Film Notes for that collection (1142 microfilm reels) explain how the films are arranged.

Look on the far right of the page for the film you want to view. If the roll has a microfilm reel icon, it has not yet been digitized, and you need to view the microfilm at the Family History Library or a library or center which holds a copy of the microfilm. If the film has a camera icon with a key over the top, the film has been digitized, but you need to be at a Family History Center to view the images.

The other icons you might see in the Film Notes are the looking glass (for indexed collections which can be searched), the camera icon with a screen behind it (where you need to go off-site, to a partner site, to view the image), or the plain camera (for images which can be viewed online).

The Family History Library has guides available to the NYC records held by the FHL which can be viewed if you are at a Family History Center. These have the same kind of information as the wiki article, but in more detail, and will walk you through the process of using the microfilms (either the actual film, or their digital equivalents).

You can see that for the collection of Queens (New York) death certificates, 1898-1949 which I referenced in the earlier question Which FHL microfilms are available to view online?, the format column has both the looking-glass icon and the camera-with key icon, meaning that the films are indexed, but the images are only available to patrons at a Family History Center. Here's what you see if you click the camera-with-key icon: 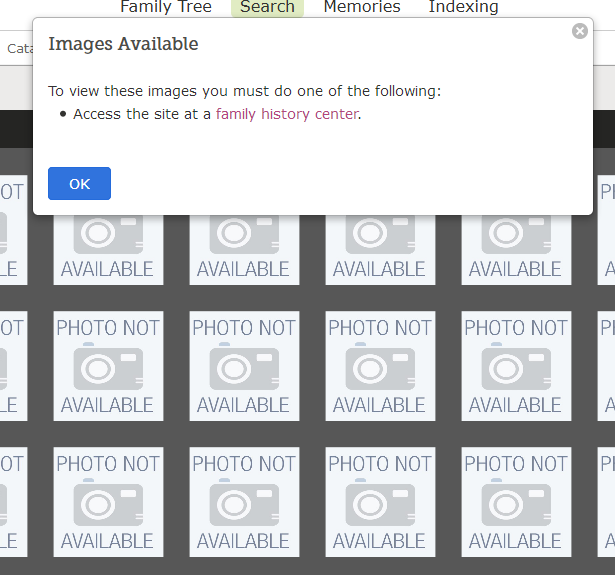 Not the answer you're looking for? Browse other questions tagged vital-records new-york-city or ask your own question.

10
Which FHL microfilms are available to view online?