Tracing residence in England during WW2?

This notice from the Cheltenham Chronicle published on October 11, 1947 refers to Mrs. Augusta Elliott as "formerly of High-street, Cheltenham". 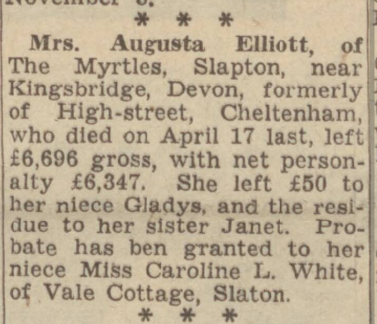 I am trying to determine when she might have lived in or visited the area.

The newspaper article about her probate is the only reference I have for anyone in the family, immediate or extended, as being from or associated with Gloucestershire. My hypothesis is that Augusta may have been in Cheltenham during the evacuation of the South Hams in World War 2.

However, I have no Gloucestershire contacts in any of the records for her or her extended family members. All known family members lived in Devon, Hampshire, Kent, or Westmorland.

Charles was born around 1855 in Devonport. In the 1861 and 1871 Census, he and his family are in Stoke Damerel. All of the records I have found for Charles' siblings so far are in Devon (Devonport, Stoke Damerel, or Brixham).

The 1886 Wright´s Directory of Bristol and Clifton has a Charles Elliott, grocer, located in Watley's End (in the listings for places near Bristol), which needs a follow-up, but by 19 Mar 1886 Augusta is in Massachusetts.

Ancestry's database Gloucestershire, England, Electoral Registers, 1832-1974 for the Parliamentary Division Cheltenham has registers up to 1939, then they resume with 1945, Spring and Autumn. There are no good matches for Augusta -- there are a few hits for an A. Elliott in Thornbury in the late 1940s. There are a few results in the Cheltenham registers for a Charles Elliott in 1920, but these are likely to be a different person (since Charles E G Elliott is already deceased by that time).

1944 16th? day of June?: will of Augusta Elliott "who is at present residing at 407A, High Street, The Strand, Cheltenham in the County of Gloucestershire, Widow"

What other records besides newspapers and directories might be useful in filling in the rest of the timeline, now that I have a street address? What records would you use to determine when Augusta Elliott returned to The Myrtles?

Browse other questions tagged gloucestershire or ask your own question.

4
Was William Chichester recorded as Judge in 1841 Census at Dymock, Gloucestershire, England?
3
Relocating christening record for Margaret Morgan, believed to be 1808 at St James, Bristol, England?