Could Francis Tolvert Greenway baptised 1774 at Falmouth be Francis Green who married Grace Woodley 1798 at Totnes?

I have asked a question about my 4th great grandfather Francis Green previously as Finding late 18th Century service record of Francis Green in Cornish Militia?

Francis Green was, according to:

However, I have not been able to locate either a baptism or birth record for a Francis Green born anywhere in Cornwall between 1760 and 1780. The nearest candidate is probably:

Despite that baptism being in about the right place, at about the right time, with a name that conceivably could be shortened to Francis Green by accident or design I considered this to be a long shot until I started to think about why his second son was baptised John Soil Green (20 Nov 1803 at Brixham, Devon). His first son William Woodley Green, baptised 14 Feb 1799, at Lustleigh, Devon, has a middle name matching his mother's maiden name, so I thought it likely that Soil might be a family name too.

It strikes me that Mary's maiden name of Sowell and the middle name of Francis Green's second son John Soil Green could be two variants of the same name.

My current theory is that Francis Tolvert Greenway baptised 1774 at Falmouth and Francis Green who married Grace Woodley 1798 at Totnes may be the same person.

To try and disprove that theory I have looked widely for records of a Francis Tolvert Greenway (or a Francis Greenway with or without middle names like Talbot because his sister Mary's middle name was Tolbot, and his maternal grandmother's maiden name was Talbot) beyond that baptism record, and have found none.

I have found burial records for all known members of the birth family of Francis Tolvert Greenway at Falmouth (except for his father William Greenway - no burial record found yet):

It seems like the childhood of Francis Tolvert Greenway was tragic because, when aged about 4 years, he lost two sisters (aged 3 days and 2 years respectively) and his mother within the space of about 19 days. Presumably, he was then brought up by his father.

If Francis Green is the son of William Greenway then it is unsurprising that Francis' eldest son is named William.

Would the above body of evidence be approaching that needed to meet the Genealogical Proof Standard necessary to conclude that Francis Tolvert Greenway baptised 1774 at Falmouth is the same person as Francis Green who married Grace Woodley 1798 at Totnes?

This image is the clipped signatures of Francis Green and Grace Woodley from their marriage record at Totnes, Devon (where both were of the parish, and Francis was recorded as being in the Cornish Militia). From this simple gauge it appears that both were literate.

Francis Green's home life was not always harmonious because The Royal Cornwall Gazette of 24 Oct 1856 reported that Francis and his son Francis had been assaulted by their son and brother Charles.

I am including some more details about Francis Green who married Grace Woodley at Totnes, Devon on 13 Feb 1798 comes from his military background (see Finding late 18th Century service record of Francis Green in Cornish Militia?) and the baptisms of their children:

These locations, events (including a birth estimate of 1770) and dates are mapped below and seem to support Francis having been born in Cornwall (Falmouth is the only place named for this event, and that was in the 1851 Census, the 1841 Census just says Cornwall), having been part of the Cornish militia for at least some, and I suspect all, of the 6 or so years that he lived in Devon, and then returning with his wife Grace and at least two children to Cornwall, where he spent the rest of his life around Truro (St Clement and St Mary). 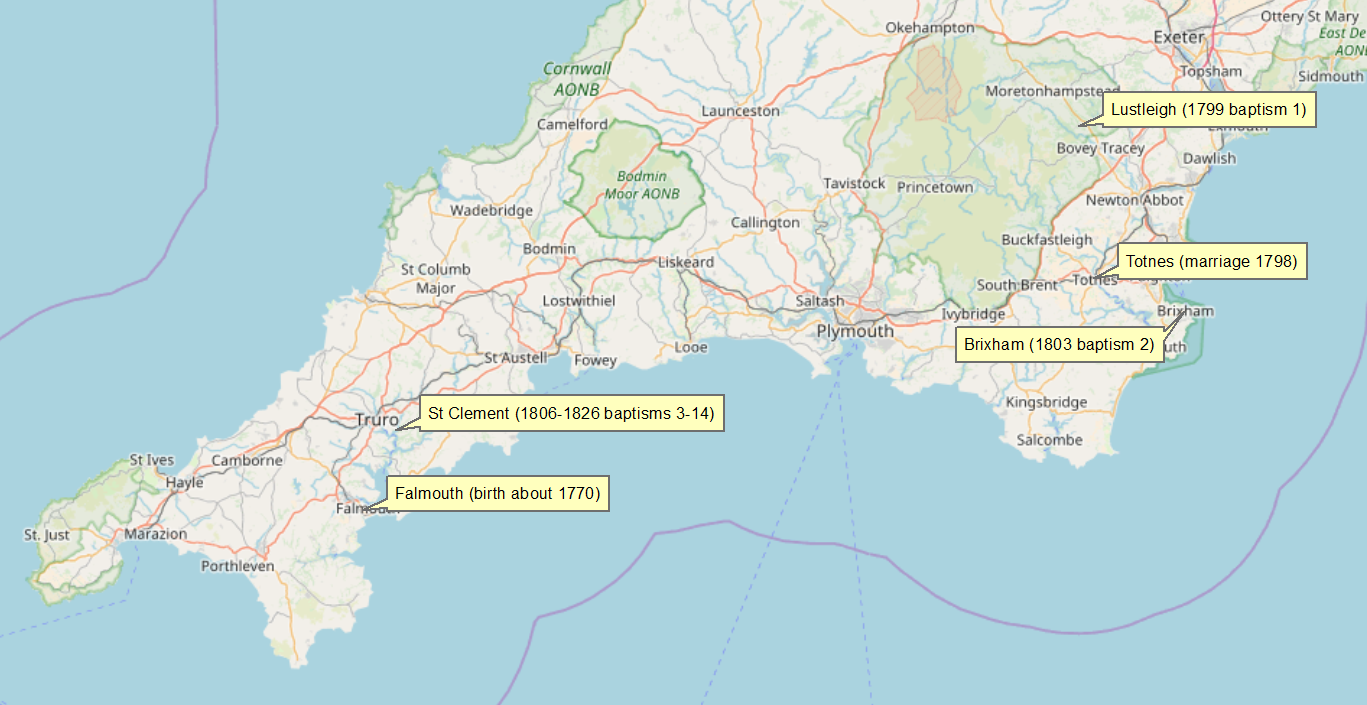 I think you may be barking up the wrong...er...family tree.

To me this doesn't add up, and certainly more evidence is needed before concluding that Francis Green and Francis Tolvert Greenway were the same person.

I can't rule out that Francis Green and Francis Tolvert Greenway are one and the same, but based on what you have written I don't see much that strongly supports this theory.

In this answer I present the timeline that I have developed for Francis Green's son John Soil Green:

I think the timeline above helps to provide a clear link between John Soil/Sowell Talbot Green (1803-1884), his father Francis Tolvert/Talbot Green/Greenway (1774-1860), paternal grandmother Mary Sowell (1754-1778; who married William Greenway in 1774) and Mary's mother Mary Talbot (born 1725; who married William Sowell in 1754) and now provides much stronger evidence that the Francis Tolvert Greenway baptised 1774 at Falmouth is the same man who married Grace Woodley as Francis Green in 1798 at Totnes.

Intriguingly, from AncestryDNA, both my sister and I share 7.5 centimorgans across 1 DNA segment with an individual, whose paper records can be traced to Mary Talbot's parents (our 7th great grandparents) Francis Talbot and Mary Ford who married on 25 Dec 1721 at Falmouth, Cornwall via their daughter Thomasin.

I also share 6.9 centimorgans across 1 DNA segment with another individual, whose paper records can also be traced to Francis Talbot and Mary Ford via their son John.

Not the answer you're looking for? Browse other questions tagged england 18th-century cornwall proof or ask your own question.

8
What proportion of the births or baptisms of children were recorded in early nineteenth century England?
2
Finding late 18th Century service record of Francis Green in Cornish Militia?

3
Finding late 18th Century service record of soldier William Hobbs in Somersetshire Militia?
4
When, where and to whom was William Henry Rouse born in about 1832 near Truro (or Redruth), Cornwall?
4
Why use name Ebzeebra for Ebbot Millman (nee Martin) on 1840 gravestone at Marystow, Devon, England?
5
Establishing identity of Edmund Rouse of St Clement, Cabinet Maker, Private in Napoleonic Wars and Weaver?
8
Finding baptism record near Marystow, Devon, for Harriet Palmer in about 1770?
2
Finding late 18th Century service record of Francis Green in Cornish Militia?
5
Did Somerset Militia recruit local Cornish soldiers when based at/near Truro around 1798?
5
Identifying parents of John & William Milman who were baptised 1800 & 1805 at Okehampton, Devon, England?
2
Finding death/burial record for Christian "Kitty" Rouse after 1851 Census in Truro, Cornwall
1
Finding 1834 location in St Clement, Cornwall, England