My ancestor Harriet Smith was born in the mid-1850s in England. Her birth certificate shows both of her parents (John Smith and Sarah Johnson). For the purposes of the birth registration, John and Sarah were recorded as if a married couple.

John and Sarah were married the month after Harriet's birth.

However, Sarah was baptised a year later and the baptism registration records her as Harriet, illegitimate daughter of Sarah Johnson. This baptism record also notes the date of birth, and given this was in a small rural parish I am certain that this is the same Harriet.

John and Sarah went on to have 8 more children.

Harriet does not appear on any census with her parents (she is with her maternal uncle in 1861, and in service by 1871).

The question remains whether John was actually the father of Harriet, particularly given he is omitted from her baptism record over a year after her birth and marriage to her mother.

I have been trying to use DNA to solve this problem. Fortunately I have been able to test the DNA of Harriet's granddaughter.

Harriet's granddaughter (E) matches with several descendants of Harriet's sister (or half-sister?) Eliza. Eliza was certainly a daughter of both Sarah and John. E matches with the following people:

These matches shown as a tree: 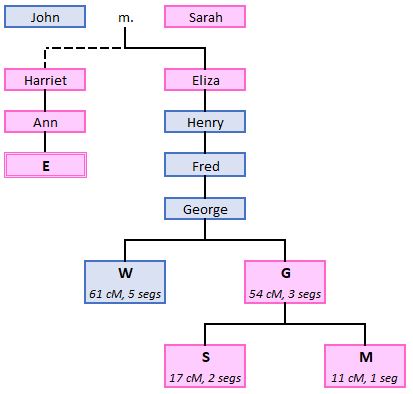 These matching segments seem smaller than I would expect for a full second cousin twice removed, although only marginally so. According to the most recent data of the Shared cM Project:

Note there is a small sample size for each of these relationships, particularly the half-relationships.

Clearly the shared cM for E and the cousins are within the range for both the full and the half-2C2R and 2C3R relationships, so it would seem to me that this DNA data is not particularly conclusive as to whether John was Harriet's father.

If there are siblings of John Smith with descendants, they could possibly be compared to E. Testing for DNA matches between E and relatives of John Smith may not be conclusive - a negative result could be by chance, while a positive match may support a relationship with John Smith yet not necessarily prove paternity - but it could shed some light.

A really good set of articles on using DNA to determine relationships based on probabilities is The DNA Geek's "Science the Heck Out of Your DNA" series (currently six parts). In particular, I think that Part 5, and the probability tool mentioned, is quite relevant to your question. Part 6 also appears to be relevant to the case you're looking at.

Using the advice contained in the answers of @Erin and @Leah, I have made some good progress on this.

I have identified a number of other DNA matches who I believe are related via the Smiths: 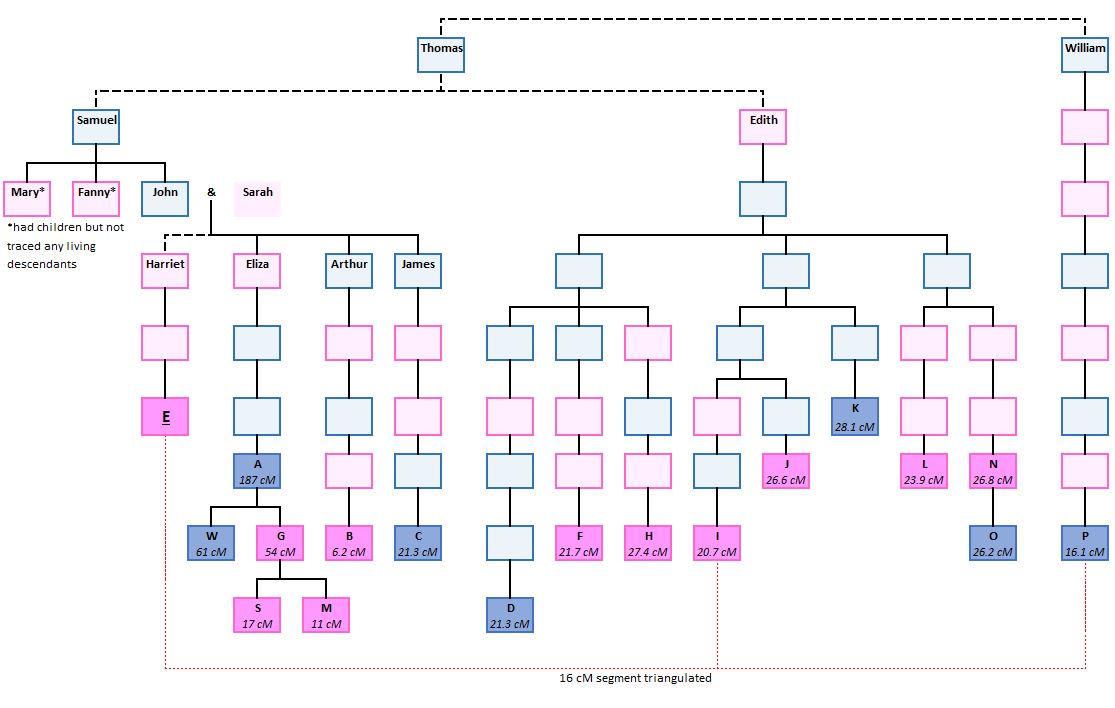 For clarity I have removed many details from this diagram, and simply denoted the new matches as letters from A to P. Match distances are as related to E (Harriet's granddaughter). Dashed lines refer to relationships which I believe are correct but need additional evidence to confirm.

I did manage to trace some additional descendants of Harriet's siblings:

I had no luck tracing any descendants of John's siblings (his sisters Mary and Fanny did have children). However, I was able to trace a number of matches who I believe are descended from Harriet's great aunt Edith. These range from 4C to 4C3R, and are all 20 something cM matches. If the genealogy is correct (which I believe it is), and the common ancestry is via the Smiths, then Harriet must be the daughter of John.

I also identified an additional match (P) who is also descended from Smiths in the same small parish – I believe he is descended from one of Harriet's paternal great great uncles. This would make him a 5C1R to E.

I do not have segment data for all these matches, but interestingly the 16 cM match of P and E triangulates with I (a descendant of Edith). This seems to tie the three main branches together. Frustratingly, P, I, and the other descendants of Edith for whom I have segment data do not match with any of the descendants of Harriet's other siblings; if this were the case then I would be absolutely sure that Harriet was John's daughter.

Based on these DNA matches I am now confident that Harriet was John's daughter. I will be on the lookout for additional matches that may make things clearer.

Since posting this answer, I have found a number of other DNA matches which add to the puzzle.

In particular, I was able to find a match who is a descendant of Fanny, John's sister. Although the match is small (10cM), it provides even stronger evidence that Harriet was indeed a daughter of John.

I've made a new tree (as I couldn't find the old file) with the new matches included. The match "JR" (descended from Fanny) is the one that really cements this.

Not the answer you're looking for? Browse other questions tagged dna research-methods autosomal-dna or ask your own question.