Percentages of nucleotides in raw DNA

I got the following percentages (in positions with calls):

The first thing that stands out to me is that this looks decidedly non-random. The second is that the A and T percentages in the first spot are very close to the T and A percentages in the second spot, and similarly with the C and G. So while the data in each position seems non-random, the percentage of A, T, C, and G looks much closer to random when all of the letters are grouped together, regardless of position. (I haven't yet tried a chi-squared test to see if they are believably random).

Question 1: does everybody observe this? Is it special to this kit?

Question 2: How can there be such a tight relationship between what's happening in each position?

Some background for Question 2: It seems that sequencing machines have no ability to determine at each position which letter came from which chromosome -- i.e., the first position at consecutive positions won't necessarily correspond to nucleotides attached to the same chromosome -- i.e. the letters in the first position can be jumping back and forth between chromosomes. Or at least, so I thought comparing the data files of a brother and sister. In areas where there was half-match, the matching letter would jump back and forth between the first and second position. But if that is the case, I'd expect to find equal percentages of A's occuring in first position as in the second, equal percentages of T's, etc.

Please see my very recent article (I wrote it 2 days ago) titled Comparing Raw Data from 5 DNA Testing Companies. Among the other analyses in it, I compared the number of result values reported for each company: 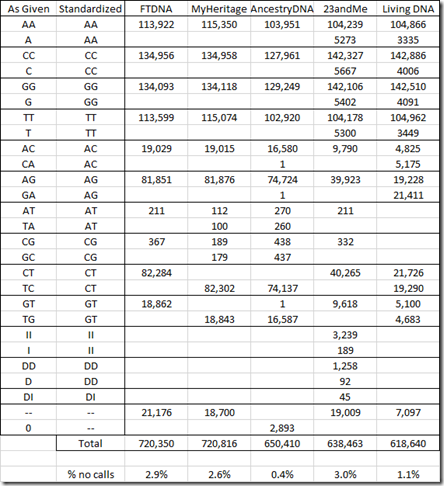 Most often then, companies order the two alleles alphabetically (my "Standardized" column), but for some unknown reason, they are not always consistent about it. Thus allele letters earlier in the alphabet (A and C) will tend to be in first position more often than letters later in the alphabet (G and T), which is what you are observing as well.

e.g. In my table above, you'll see that two companies use CT and two use TC and one uses both. But the majority of any company's values are alphabetically ordered.

8
Why would I export my raw DNA data?
7
Finding haplogroup through raw DNA data?
7
Converting AncestryDNA 1.0 file format to 2.0 and vice-versa?
6
What is FTDNA's Chromosome Browser showing for the X chromosome?
7
Explaining major discrepancy in genomic position between Gedmatch and MyHeritage?
2
Seeking tools to analyse 23andme raw data?
5
Phased psuedo-kit on GEDmatch -- what accounts for huge drops in SNP count?
9
Is Whole Genome Testing in any way useful for Genealogy?
3
Are there different amounts of "fuzziness" in the endpoints when doing pairwise 1-1 comparisons among three people at GEDmatch?
5
Triangulation conundrum