I imagine no group of 100 people has been as genealogically documented as the Mayflower passengers. And with an estimated 35,000,000 descendants living today, the number of descendants genetic tests should be large and growing.

But a typical descendant who is lucky enough to share some DNA with her Mayflower ancestor will only share a short segment. This segment will typically get lost during genetic genealogy research, crowded out by larger segments or segments with MRCAs in a more recent time-frame.

So I wonder, is it now feasible or will it be soon to track down several thousand descendants of a given Mayflower passenger who are willing to take DNA tests? Some mining of such a large data set may accomplish what individuals cannot, being unable to see the forest for the trees. If analysis revealed a short piece of chromosome where almost all of several thousand kits were unique, but, say, 25 kits all matched, that may be more convincing evidence that the segment is IBD from that ancestor. And at least in my own research, beginning with known genealogical connections and searching for DNA matches has been much more fruitful than trying the reverse.

There would be several issues here:

1) How many DNA tests exist for confirmed descendants of a given Mayflower passenger? How many of these people would be willing to contribute to such a project? (I presume most people who have been confirmed with membership in the Mayflower Society and who have kits are already primed to contribute.)

2) How many kits do you need for an ancestor 13 or more generations back to have a hope of identifying even a single short segment through data mining? I'm not thinking we could reconstruct close to the whole genome for any passenger, but IMO finding even a single 5cM segment through such a process would be marvelous. If we could construct significant proportions of genomes, then perhaps we'd see some surprises, like unknown familial connections between different passengers.

So I guess my questions are: is such a project feasible? Is there interest? Is there one in the works?

(I'm also interested to know how many y-chromosomes have been identified for the male passengers and how many mitochondrial sequences are known for the females ones.)

As of 2010, there were about 28,000 documented dues-paying Mayflower descendants. There have probably been about 16 million DNA tests taken by people in the United States, or about 1 out of every 20 people. Mayflower Society members may be more interested in their Ancestry than the typical person, so lets say 1 out of every 14 of them have taken a DNA test. Then there would be about 2,000 Society members who have taken DNA tests.

There were 102 men aboard the Mayflower who would be the ancestors of these 2,000 members with DNA tests, which is an average of only 20 DNA tests per ancestor. But let's say there was one person on the Mayflower who was prolific and has the largest proportion of the descendants, say 25%. Then that ancestor would have about 500 DNA tests we could use.

Now lets see if 500 DNA tests would be enough.

We each have 22 autosomal chromosomes from our father and 22 from our mother. At that level, if you consider each chromosome as segment, then we have 44 segments at generation 1. We'll take just the father or the mother, whoever is the descendant of the Mayflower ancestor.

The problem we have already is that a DNA tester has only a 430 / 2,000 = about 20% chance of getting even 1 segment of their one Mayflower great(11)-grandparent. So now we only have 100 DNA testers who actually have some DNA from that ancestor. We don't know which of the 500 those 100 are.

Some of those segments would overlap between DNA testers, which would theoretically allow for identification. But you must identify the DNA up through your ancestors one generation at a time with the help of genealogical records, ensuring that you have relatives supporting that the DNA came from one specific line rather than another. Techniques like Chromosome mapping and DNA Painting have only started to be used in the past few years to do this. And there are few people who have been able to map a line or two back to about 8 generations but not much more. That far back, both the DNA and the genealogical records start dying out.

Even with one line down from the Mayflower documented the 13 generations, you won't have the other lines of those descendants documented so that you could disprove that the DNA is from any other line.

So no, I don't think this project would be possible to do.

As far as Y-DNA and mtDNA for Mayflower descendants go, the only company that tests and gives Y and mt matches is Family Tree DNA. Family Tree DNA promotes group projects and one of the projects is a Mayflower project that is run by the Mayflower Society which currently has 1270 members. If you click on their "Project Statistics" page, you'll find statistics about the Haplogroups of the members, and you can find DNA details on the DNA Results and other pages. 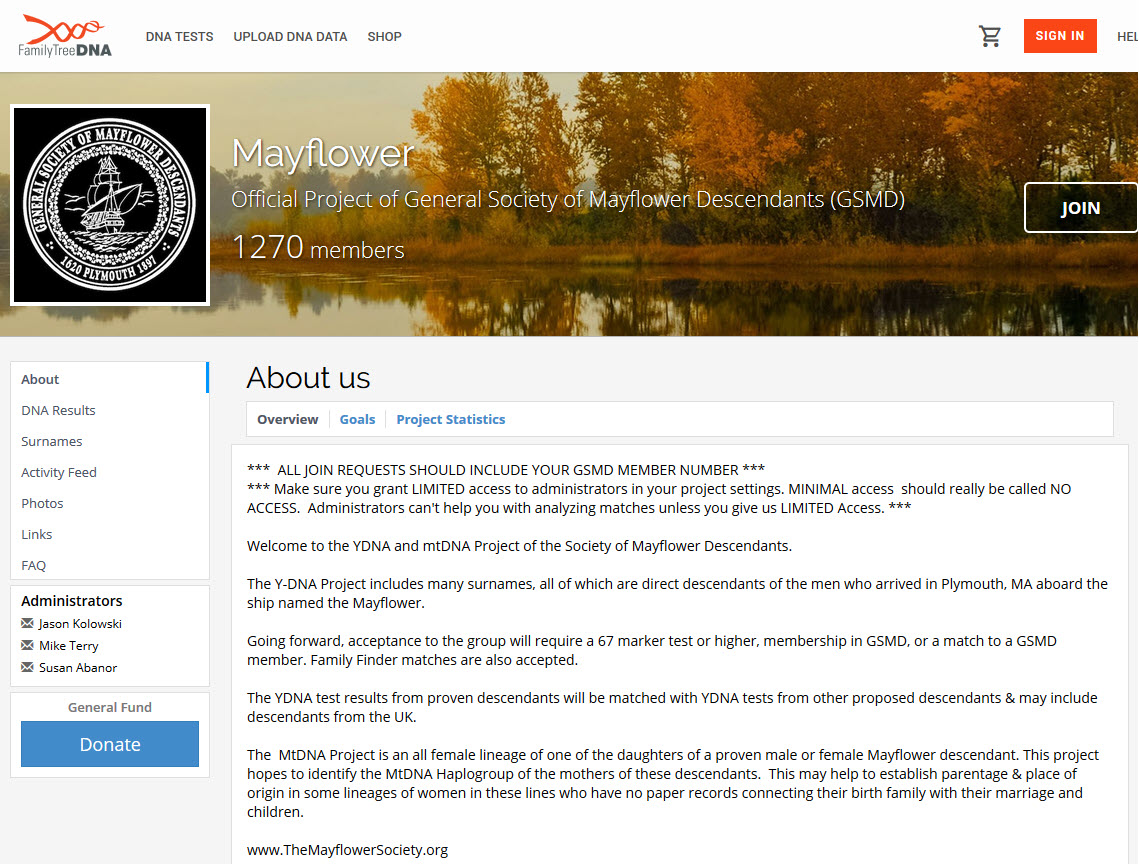 Now I'm not saying that a project like this is not feasible at all. I just don't think there are enough descendants in the Mayflower pool and too few of the descendants will have enough of their ancestral trees documented.

However, this would likely be a very feasible project for Icelandic people. The Icelandic family tree includes 95 percent of all Icelanders born since 1703, along with half of those who lived on the island between 874 and 1703. You would need enough of the 300,000 descendants living today to take a DNA test so that most of them would have a few first, second and third cousins who also took a DNA test. So maybe 1 in 3 people would be needed, and then you'd be able to start assembling raw data sets for their parents, then grandparents, and continuing to work your way back. It would be very exciting if a project like you suggest got started for the people of Iceland.

11
Generational Loss of Data with DNA Testing
7
How to interpret a reasonable X DNA Match, but no shared cM Autosomal result on GEDMatch?
2
Forensic Y-STR DNA test provider that can provide results at greater than a Y-37?
10
How to narrow down the best DNA donors in a large family?
4
DNA Sticky segments
5
Determining shared maternal or paternal lineage via shared DNA segments?
5
Segments with no matches
2
Are centimorgan contributions additive?
5
Using DNA to link individuals after a name change
1
Seeking software to help triangulate segment DNA matches?