In light of former questions asked on Genealogy Stackexchange like What happened to Gustav Adolf Neumann, 1859 immigrant to the US? and Finding clues for a missing immigrant in the 1870 Census?, I continue to struggle with finding out the whereabouts of one of my ancestors, Gustav Adolf (Adolph) Neumann (probably written sometimes as Naumann or Newman in the USA).

The problem I have is that, as US immigration records in the 1860s or so seem to care little about the full name of the applicants and their birth date and places back in the country of origin, I do not know to proved or falsify that the records below are from "my" Gustav Adolf Neumann or from somebody else.

I cannot find a petition or another document of the naturalisation process (apart of the two below) which seems complete in the sense that birth date and place are recorded next to his name and age. How can I find it?

These are the information I have gathered and which are proven by records:

I thought that he might have liked to become US citizen at some point in time and learnt that - in case so - the Naturalization Law of 1803 must have been applied on him. This law would require him to stay at least 5 years in the country (until 1864) and that he the earliest applies three years in advance (around 1861) before he would be eligible for getting the citizenship (the fastest in 1864).

In addition, I learnt that the step to be naturalised would be loosely three-fold: first you give a Declaration of Intention, then an Oath and then you would present yourself to a judge, before eventually getting the US citizenship.

So I searched for it, but the US records seem to lag precision (in that time).

For example, I found a passport application from August 26, 1861 within the United States Passport Applications, 1795-1925 Collection, however, I do not know whether it is "my" Gustav as I do not know the place of birth of the person. His age would fit and the place, New York, where he intended to stay, but I struggle to fit this application in.

This seems to be the Declaration of Intention. 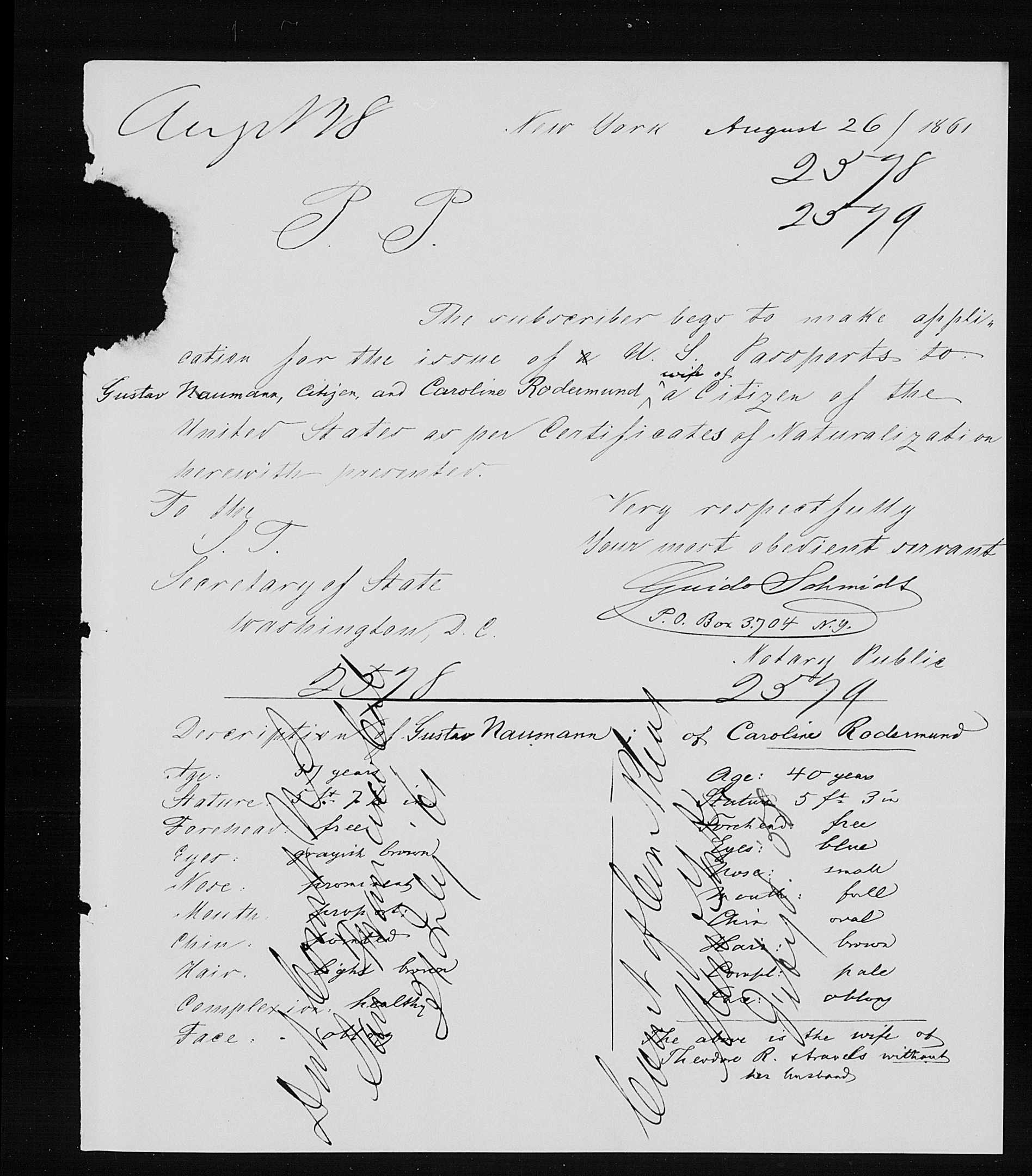 Then for August 1861 I found an apparent oath given by a Gustav Neumann within the United States Passport Applications, 1795-1925 collection, which I believe could be the Oath he would need to give in a second step. Again, time and space do fit. 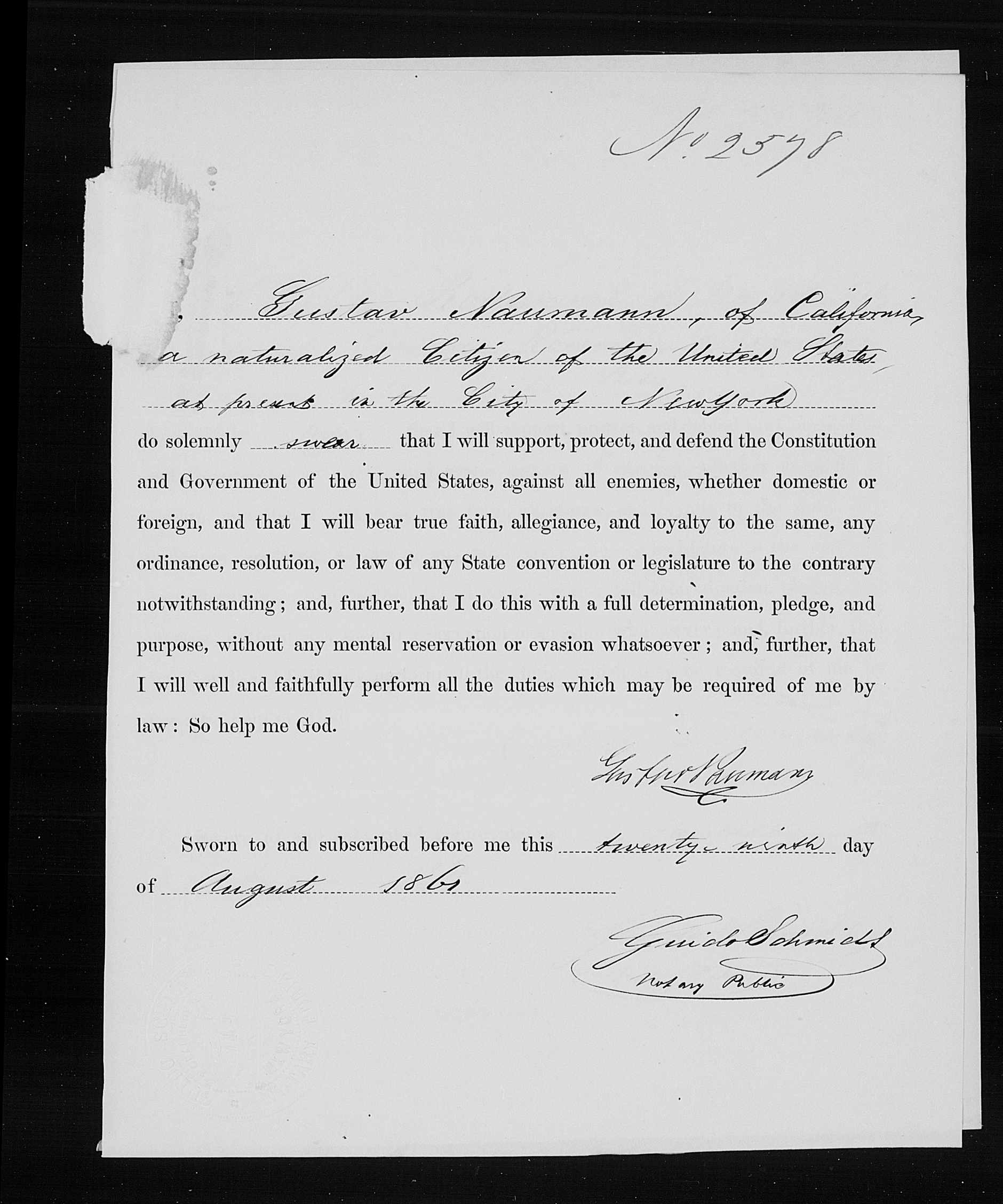 However, now the Oath says that he would have been naturalised already and would be "of California".

Let's start by clarifying some points in your question.

Passenger lists for this period (Castle Garden) are US Customs lists rather than immigration lists as we see from the Port of New York in the 20th century. We should keep in mind that passenger lists were usually made at the departure port, and it is possible that your immigrant may not have given the information to the clerks or agents who sold the tickets. The entry 'farmer' describes the passenger's occupation in his home country -- it is not intended to be forward-looking. So I would hesitate to say that the information is a lie, especially since it was written down by someone other than the passenger, and we don't know who the informant was.

You were right to look up US Naturalization Law, but the Act you cited in your question may be too early. US Naturalization law was changed many times over the centuries. In the handout for his presentation Naturalization Know-How: The Laws and Records of U.S. Citizenship, presented on 19 April 2018 at the Florida State Genealogical Society, Rich Venezia gives a timeline of changes to the law. His non-exhaustive list gives eight dates for changes to the law after the date you cited, and there could be more that weren't included on his list. The Act closest to, but before the 1861 date of your document, is the Act of February 10, 1855 [10 Stat. 604]. To check for other changes, you could try looking for the Act of July 17, 1862 [12 Stat. 597] and working backwards in time.

Naturalization is a two-step process. For an overview, see the article U.S. Naturalization Records Class Handout by Jill Shoemaker in the FamilySearch Wiki -- however for specifics, check the law itself. This page contradicts some of the other references I have about fine points like the length of the waiting period. The online guide at the US National Archives' site is here: Naturalization Records. NARA's guide says:

As a general rule, naturalization was a two-step process that took a minimum of 5 years. After residing in the United States for 2 years, an alien could file a "declaration of intent" (so-called "first papers") to become a citizen. After 3 additional years, the alien could "petition for naturalization." After the petition was granted, a certificate of citizenship was issued to the alien. These two steps did not have to take place in the same court. As a general rule, the "declaration of intent" generally contains more genealogically useful information than the "petition." The "declaration" may include the alien's month and year (or possibly the exact date) of immigration into the United States.

Looking at the specific act will give you the residency requirements at that time, but as a general rule, the Oath was taken at the same time as the Petition was presented. While Ancestry indexes the Oaths separately, making this look like a three-part process, in my experience, the oath is generally found together with the petition in the court records. While the article from the FamilySearch Wiki talks about "three major steps", that instructor's "third step" is receiving the Certificate of Naturalization. It is a third type of record, but it's not a third step in the sense of something else (besides fulfilling the residency requirement) that the applicant has to do.

The critical question you need to answer is which Act was in effect at the time the person from the 1861 papers became a citizen, so that you can predict when that person's arrival might have been. Rich Venezia's handout says that the Act of May 26, 1824 decreased the length of time required between the Declaration and the Petition from five to two years. So my questions would be:

To properly analyze the Oath you found, it's important to know what set of records it came from. Could this have been an oath given for some other purpose (that is, is it supporting documentation for the Passport Application)? If so, that means you have to look for the naturalization papers for this passport applicant to see when he was naturalized. Where did you find this oath?

See the online guide at the US National Archives' website, Passport Applications:

The Department of State has issued passports to American citizens traveling abroad since 1789, but did not have sole authority to do so until August 23, 1856, when Congress passed an act (11 Stat. 60) prohibiting other governmental entities, such as state and judicial authorities, from issuing passports.

Overseas travelers included businessmen, the middle class, and naturalized U.S. citizens who returned to their homelands to visit relatives. [emphasis mine]

The passport guide at NARA has several interesting parts. In particular:

Since passports were generally valid for two years or less, the researcher should search the indexes covering the individual's entire lifetime because he or she may have submitted several applications. Multiple applications by the same person may provide conflicting, but useful, clues for further research.

To properly evaluate the passport application, it helps to know what kind of passport the application was for. See the section Part 3: Types of Passport Applications. Most applications would be for a regular passport -- note that emergency passports have different rules.

We can get much more information out of historical documents if we understand the purpose for which they were created, and the process involved in making them. You'll be able to evaluate all of the information contained within once you can get a complete and accurate source citation for these documents.

Update on the passports below the line:

The descriptive pamphlet for NARA's microfilm publication M1372 is a roll list, which shows us that the passports are arranged chronologically on the microfilm. Browsing fowards and backwards from these documents, you can see the following:

People rarely came to the US by themselves -- either they traveled in groups, or they had plans to join other groups once they arrived here. Researchers in the USA who are looking for the European places of origin can sometimes find that place by studying whole groups of people --cluster genealogy or studying the FAN (friends, associates, and neighbors) instead of trying to look for just one person in isolation. You can do the same thing in reverse. Do you know other emigrants from the same area as your Gustav? Where did those people go?

Not the answer you're looking for? Browse other questions tagged united-states germany immigration naturalization or ask your own question.

5
Finding clues for a missing immigrant in the 1870 Census?
4
What happened to Gustav Adolf Neumann, 1859 immigrant to the US?

2
Locating a 20th century New York Death record
2
Becoming Australian citizens after British ancestors came to Australia?
2
Finding Naturalization Record for Hugh Sellars from Scotland who lived in Albany (New York State) 1855-1872?
8
What do these extra numbers mean on this ship manifest?
4
What happened to Gustav Adolf Neumann, 1859 immigrant to the US?
5
Finding clues for a missing immigrant in the 1870 Census?
5
Cannot find an immigrant in the 1860/70 US Census
3
Finding a death record from Manhattan (New York City)?
5
Do petitions for naturalization indicate the date of the first arrival to a country or the last time they had entered the country when filing?