Triangulation with DNA Results - is something amiss?

My 1st cousin 1xR and my Aunt and I have all taken Ancestry DNA tests. For clarity sake I will refer to the parties as "Z", "N" and "R"

But Ancestry DNA reports that there is no shared DNA between "R" and "Z".

Is there any way that makes sense? 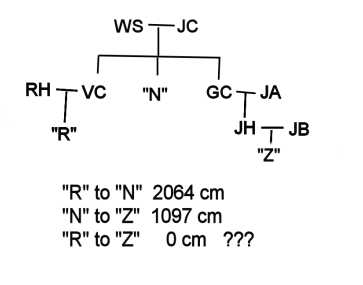 Whoa, that chart popped up in the middle of my answering this. I was getting nowhere fast because the numbers weren't adding up. Now I see it's because your explanations of relationship were not clear enough. Z isn't anybody's aunt, she's a younger generation. That was throwing me.

R and Z are (on paper) first cousins once removed. They should share 141-851 cM. They actually share zero.

The most obvious explanation is there is a half-sibling relationship going on here. A NPE (non parental event or “not parent expected”) from the sound of it, or you wouldn’t be asking.

But it still doesn’t fit. The half uncle/nephew and half granduncle/niece possibilities don’t come out even close with the numbers.

The only thing I can come up with is that GC has one parent different from N and RH (who are full siblings).
AND that Z is GC’s child, not grandchild.

Z and R would be half first cousins and that doesn’t work because the range is 137-856.

Perhaps there was an error when you compared R and Z. I’d put everyone in Gedmatch and check it again.

I'd definitely recommend looking at the In-Common-With (ICW) list of people between your aunt and your suspected 1C1R. You have already said that you will not be listed as one of the in common people. Compare that to your ICW list between you and your aunt.

If the two lists have few people in common between them, then maybe you need to form a new hypothesis about how this person is related to your aunt.

If the two lists have a lot of people in common, but you are not in it, then something else is going on. It is rare that a DNA company would make this sort of error for matches that are this close. But if in fact your full aunt's great niece/nephew does not match you, then you should contact Ancestry DNA to see what's going on.

2
Could a first/second cousin DNA match actually be my half brother?
9
Can my DNA results be wrong?
2
Explaining DNA mystery of unexpected 1st cousin?
0
Could be half brother?
3
Understanding DNA results?
2
Sharing more autosomal DNA with second cousin's child than with second cousin?
9
Unknown 1st cousin match who shares matches with both grandparents
1
DNA/Half-Sibling or First Cousin, Based on Fairly High Shared cMs
2
Understanding shared DNA of 1,576 cM with great nephew