This title was found and copied from the obit for my great grandfather Adam Farnlacher who passed in San Francisco in November 1908.

I located the obituary for your great grandfather in the The San Francisco Call, dated 18 November 1908. This obituary mentions a different lodge: 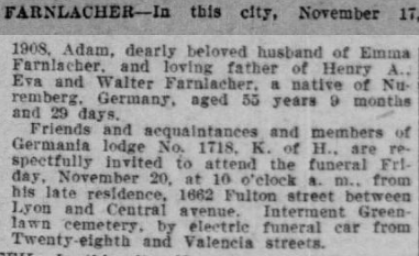 As you can see, in addition to some wonderful genealogical 'gold dust', this obituary mentions Germania lodge No. 1718 K. of H. (Knights of Honor). It is, of course, possible that Adam was a member of more than one lodge.

Looks like it's the "Knights of the Royal Arch". See this 1901 article from San Francisco about them, where they are described as "an organization of men engaged in the liquor traffic".

This may be a reference to Royal Arch Masonry.

See (via Google Books) Proceedings of the Grand Chapter of Royal Arch Masons of the State of California at Its ... Annual Convocation, Volumes 37-39 (1891), where the San Francisco Chapter is listed as No 1 (Sonoma is Chapter 2). 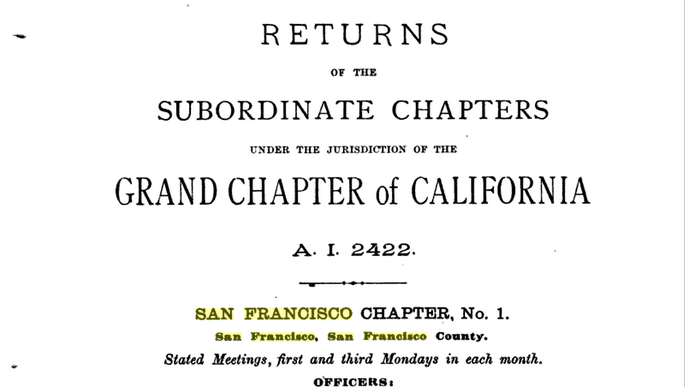 There are no members named "Farnlacher" in this specific volume.

Other volumes on Google Books mention a San Francisco Chapter which is Number 5.

A search in Proceedings of the Grand Chapter of Royal Arch Masons of the State of California at Its Fifty-Fifth Annual Convocation (1910) at Internet Archive didn't yield any search results for "Farnlacher" but you could try browsing the early 20th-century volumes to see what you can discover. The Proceedings often include a mortality section for members who have died since the last report, with death dates. Your grandfather could be listed, but if the underlying OCR doesn't match the spelling you search for, his name won't come up in the search results.

Be aware, however, that other sites about fraternal organizations (unsourced) say that there is an organization called Knights of the Royal Arch which is not associated with Masonry. You'll need to look for more information to correlate with what you already have. Does your grandfather have a memorial inscription (gravestone)? If it has a Masonic symbol, that would suggest he was a Royal Arch Mason, and not simply a member of another organization with a similar name.

I, too, have been trying to untangled these orders. I find that the Freemason order of the Royal Arch are often referred to the "Royal Arch Masons' in newspaper articles, as opposed to the Pacific Coast organization of liquor dealers and saloon men who also name themselves the 'Knights of the Royal Arch." Why this second organization named themselves so closely to this long established Freemason order is still beyond me! Still working on it.

Not the answer you're looking for? Browse other questions tagged death-records 1900s-decade california fraternal-organization or ask your own question.