Was Daniel Rich (Jr.?) the grandson of Jacob Rich? Or, the confusing case of Daniel Rich (Sr.?) and Nancy Marshall

I apologize up front, because this is going to be a long, rambling and confusing question, but here goes:

With a high degree of certainty, I can trace one branch of my family tree back to one Daniel Rich (1816 - 1890). For clarity, I will call him Daniel Jr., even though I don't know if that is accurate. The issue arises with his parents and his potential connection to one John Rich/Johannes Reich, which I will get to.

First, a brief map showing the geography of the area in question, the northern Vermont/New Hampshire Border region: 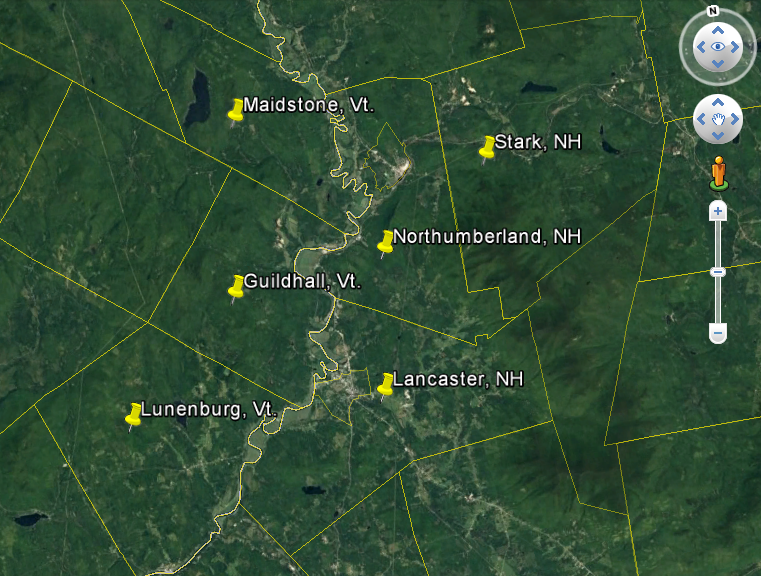 Now, the first half of the story, working backwards from present:

Now, things start to get a bit difficult. I can't find a birth certificate for Daniel Jr. This area was still basically the frontier in 1816, so I'm not shocked by this. However, I also can't find any marriage license or birth records for Daniel Rich Sr. and Nancy Marshall. And they don't show up in the Census together either. However, there is a great deal of paperwork (marriage licenses of children, death certificates, Census, etc.) for one Daniel Rich and Sophia P. Chase. And, if you look on Find-A-Grave, you will find a Daniel Rich (1790 - 1868) who it was claimed was married to Sophia Prescott Chase around 1817 and who died in Northumberland, NH. But the list of children does not include anyone named Daniel.

So, what to do? Well, it turns out I may be able to approach it from the other direction. And so begins Part 2.....

The second half of the story, working forwards from the past.

Now, before anyone says it, yes, I know that one of the cardinal rules of genealogical research is that you don't start from some person you want to be related to and work your way forward trying to prove yourself right. However, family story has it that this part of the family is descended from John Rich (1729 - 1813) of Maidstone, Vt., who was a German immigrant born Johannes Reich. And, there is a great deal of information on him and his children thanks to this book: http://www.maidstone-vt.org/history. So, I figured I didn't have much to lose.

Anyway, John Rich had 9 children - 3 girls and 6 boys. Of the boys, one died as a toddler and one, named Daniel (of course!), died at age 20 with no kids. Of the 4 remaining boys, only 1, Jacob Rich (1770 - 1827), had a son named Daniel. So he is the only possible direct connection between John Rich and Daniel Rich Jr. from above. But, once again, I can't find birth, marriage, or death records for him.

But wait, there's more! In an effort to fill in the gaps, I read the article on Maidstone, Vt. in the Vermont Historical Gazetteer, Volume 1 (https://archive.org/details/vermonthistorica01heme/page/n1061). You will note that this article is written by Moody Rich (1780 - 1873), who was Jacob Rich's brother and Daniel Rich's uncle. However, he only would have been about 10 years older than Daniel. Why is this age gap important? Because on page 1028, Moody recounts a tale of how the wife and daughter of Caleb Marshall escaped the Indians. And then he mentions that he later married that daughter, who I know from other sources to be Sally Marshall. And it turns out that Sally had a younger sister named Nancy Marshall (born 1792)! Now the book also mentions that that Nancy Marshall married George Washington Byron sometime after 1824, but it does not mention any relationship between Nancy and Daniel Sr.

First, if you actually made it this far into the question, kudos, you are more patient than I am. Anyway, what do we have?

Which leads to several questions:

3. If the answer to both of the above is "yes," what was the nature of the relationship between Daniel Rich Sr. and Nancy Marshall? There is no evidence that they were married, and both were married to other people shortly after Daniel Rich Jr. was born. A quick marriage followed by a divorce or annulment seems incredibly unlikely in 1816. An out of wedlock birth is certainly the most obvious possibility, but if that is the case, how likely is it that the resulting child would know not only his mother's real name, but also her place of birth (for the death certificate)? How common and accepted were out of wedlock children in early 19th century frontier New England?

I know that one of the cardinal rules of genealogical research is that you don't start from some person you want to be related to and work your way forward trying to prove yourself right.

Not at all. This is a common technique for getting through brick walls. There is nothing wrong with starting with any given person and finding out all you can. It's only a problem if you make assumptions not supported by the evidence, or if you come to conclusions with insufficient evidence (same as for all genealogical work).

As for your questions, as you already know, there just isn't enough evidence. Either you have not found the relevant documents, or they don't exist (because they never existed or because they were lost/damaged/destroyed).

Could Daniel Rich Sr. and Nancy Marshall have been unmarried parents? Unlikely they'd be listed like that on a birth certificate if she had a husband. Any child she bore would be assumed to be the child of her husband (that's been the law in the US for a very long time and still is). If she were not married, then maybe...

I recommend a wide approach. Research whoever you can with the relevant surnames in that area and time period. Keep careful notes (a good genealogy program, I use Family Tree Maker) which allows you to record unlimited individual facts and match them with sources is pretty much essential). Record all facts, even misspellings, incorrect dates, addresses, etc. Just be super clear on the sources and add notes if/why things are wrong.

Eventually, you should be able to put some of these facts together and prove another link in your chain. It will be slow exacting work.

If you have not done so already, and it's logistically possible, go to the area and spend some time with the local archives, in cemeteries, and walking the properties you have legal access to.

Not the answer you're looking for? Browse other questions tagged 19th-century 18th-century vital-records new-hampshire vermont or ask your own question.

16
Locating an elusive UK birth record (Mary Ann Harper born circa 1865 possibly Dudley, England)?
18
What is the earliest age a boy in England could get married in the 1800s?
7
How can I ensure that I am making a reasonably exhaustive search?
5
Resolving conflicts between conclusions of different researchers (internet & professional historian)?
3
John Sherwood Clarke: Explaining the two surnames and finding his birth record in France?
4
Would a deceased father be named on his child's baptism record?
4
Who were the wives of John Ervin (1791-1843)?
2
Identifying father of Jacob David Keil born 1854 around Lemberg