Finding records of professional athlete and trainer who married 1911 at Cardiff, Wales?

I have a marriage certificate for my wife's great Grandfather.

According to the certificate, he was born about 1885. He signed it as "Alexander Campbell Harris". He stated that his father was "Samuel Harris".

The marriage itself was on September 12, 1911 to "Esmé Catherine Earley" in Cardiff, Wales.

On the marriage certificate, he states his occupation as "professional athlete" and, according to family members, he used to be a trainer or something, massaging those who participated.

What options are available to me to try and locate him in any records?

I already have the details for his wife Esmé: 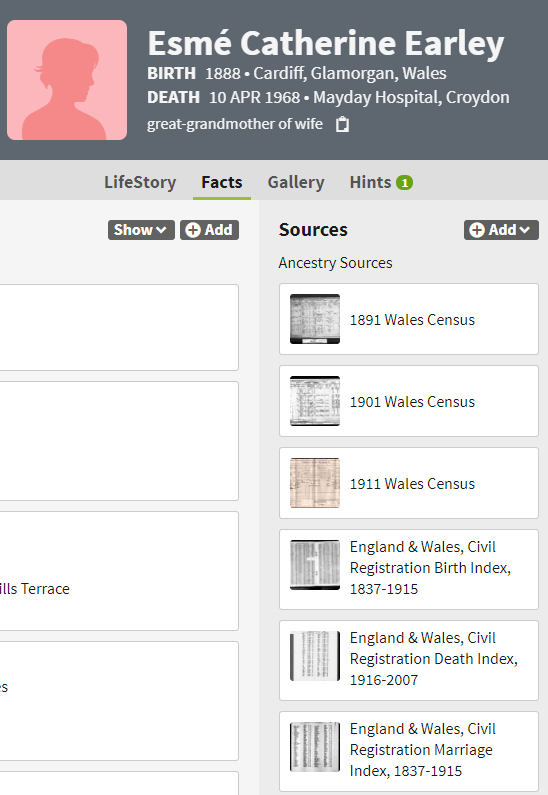 I ordered the death certificate that was referred to in one of the answers and it arrived today.

His rank or profession is indicated as:

Today, his daughter's (Esme Harris - not his wife, also Esme :)) marriage certificate arrived. She got married in 1937. This was the interesting bit:

In this case the marriage certificate confirms that her father was already deceased by 1937. In addition, it states that his last known profession was:

That ties in with the death certificate that was tracked down. Got to be right. Still not got anywhere with the birth though (made harder due to the discrepancies as discussed on here).

Turns out that Alexander was buried at Llanelli District Cemetery. On their records for his grave it also states a 5 month old girl buried in 1920. I will research her. For Alexander, their records had Harries as the surname (no middle name). We know this is the correct person though because the address is the same as the death certificate. And for the girl, her address was Brecon Arms. And Alexander's wife was a Landlord of a pup in Llanelli. Unfortunately there is no gravestone as they looked for me.

So the only thing I struggled with is birth and I think I asked a separate question about that. Can't remember. I have only ever found one entry with the correct father being Samuel Harris and a mechanical engineer. But that is all - in Scotland.

Brute force searching is sometimes the way to go.

I found your wife's great grandmother's birth record on Familysearch.

It also has a transcript of 13 year old Esme in the 1901 census with her family. With a note that you can view the record at FindMyPast. I assume you have these.

Sometimes researching other family members is the way to go. Especially when you're dealing with a very common surname and a common given name, but someone else has a less common given name. I found what appears to be a daughter, also Esme, born 1916.

The only Alexander Harris I found in the census was in 1891. This family moved around a lot.

Building a collection of facts and associated names will help you get closer to your goal. Be sure to check middle names too, as I did.

Your next step is to spend some time looking through census returns for Cardiff in 1911. The transcription of the name might be wrong and this can throw off the search. You might find a Tharris or Heris instead of Harris, one never knows. Start there because you are more certain of the town (though they could have gone on a holiday in order to get married). Then work backwards.

My first step was to look for the births of children registered with the surname Harris and the mother's maiden name of Earley from 1911 onwards, using the GRO indices.

(The GRO indices with mother's maiden name don't go beyond 1918, but Freebmd added 4 children born in Llanelly between 1920M and 1926 (redacted in line with our privacy policy).

Findmypast has baptism records for two of the children:

Looking in the 1939 register for Harris families in Llanelly, I find:

Looking on Freebmd for deaths of an Alexander Harris in Llanelli, I find:

You may wish to order the death certificate to verify it is who it appears to be by (for example) checking whether the informant is Alexander's wife Esme or one of their known children; and/or if his occupation matches what you know; or if the address aligns with known addresses for 'your' Alexander -- for example, his address at the baptism of his children where known, or the address for the widowed Esme in 1939. Enough points of congruence (or conversely) enough points of dissonance should help you decide whether this is 'your' Alexander. You could also investigate the availability of electoral rolls, education records for his children, newspaper notices of his death, ... anything that will help you build up a picture of where the family lived in the 1920s and 30s, and also whether there was somebody of the same name in the same area at the same time, and perhaps make buying the death certificate less of a gamble (if you think it is one).

If the death certificate is for 'your' Alexander, you will want to understand the discrepancy in apparent age at marriage (suggesting DOB of 1885) and death (suggesting DOB of 1875). It may be a simple mistake in transcription of the death record (60 instead of 50); or the death informant didn't know the truth; or there was a lie told at marriage (perhaps to make him seem closer in age to Esme?); or a mistake on the marriage certificate.

In any case, it increases the date range in which you should be searching for birth/baptism and census records. You should ensure your search includes England Scotland and Ireland as well as Wales -- the name Campbell in particular would have me wondering about Scotland and Ireland. Cardiff, where he first appears in the records as far as you have found so far, is a port and as a wealthy city at the beginning of the 20th century attracted 'immigrants' and seamen from all over the United Kingdom and Ireland (and beyond).

When searching, bear in mind that:

In short, don't assume that anything you 'know' is true! And don't rely on a single index of (e.g.) births -- there are errors in all of them but (hopefully) not the same errors. Peter Collier has documented some errors in the GRO indices, but they're all prone to transcription error (even assuming the data was recorded properly in the first place.) Try to double check with multiple indices and make sure they'ra independent -- Ancestry uses the Freebmd indices (as far as I know) so no point cross-checking those two...

(1) I have an ancestor who was named Stanley Reynolds Wright at birth, appeared in censuses from 1871-1901 as Stanley Wright , separated from his wife and appeared thereafter as John Wright, and was named as John William Wright when his wife died.

Not the answer you're looking for? Browse other questions tagged birth-records census-records ancestry.com wales findmypast or ask your own question.

5
How can I learn about a Trade Union activist in the South Wales coalfield in the 1890s and 1900s?
4
Finding marriage record for Priscilla who married printer Henry Hughes probably about 1810 in Breconshire, Wales?
2
Finding birth family of Betsey Richmond who married in mid 19th century Liverpool?
2
Looking for Census records of Joseph Campbell, born in Chester 1854
5
Determining a relationship from the 1871 census?
3
Creating a custom source on ancestry.co.uk
5
Deciding between multiple birth names and dates?
2
Dealing with different birthplace and names of parents in England?
2
Were Scottish middle names sometimes added later? Eg. Campbell
1
Locating a birth record for Mary Harris circa November 1919