Finding a town in Russia-Poland from 1910

On the passenger manifest arriving March 25, 1910, it shows my great grandfather, Stanislaw Zaniewski as being from "dawewicz" Russia. We are trying to track down his birth or baptismal records. He was Roman Catholic. Can you help?

The manifest record is on Family Search. Number 20 on the list (also go to the next page).

I've left in my wrong turns below on purpose, to show the process of genealogical research and how to build evidence. This manifest is both correct and a red herring. It led me to some hypotheses that didn't pan out. To read about the path that led to the answer, go down an entire section, to "I'm getting nowhere fast."

The full page is on FamilySearch (thank you @jpmiaou for the link).

Stanislaw Zaniewski
Age 17
Male
Single
Can't read the occupation but it's something almost everyone on the page is marked as (so either "none" or "laborer" or something common)
Can read and write
Nationality Russian
Race or people Polish
Last permanent residence: Zaniewicz, Russia
Nearest relative from country you came from: father, Kazinires? Zaniewski (or close), Dasnis'craicz (there are maybe two exemplars on the page and they're both badly written...the other person's last residence was Vilna, Poland).
Final destination: Maynard, Mass
Going to: Uncle, Joseph Zaniewski, box 164, Maynard, Mass
Birthplace: Zaniewicz, Russia

Some of the transcriptions differ because the handwriting is so bad. My spellings are way off. But I am certain that the town for his last residence and his birthplace are one, the same, and two, starts with a Z.

I also find it really odd that their last name is the same as the town (slightly different ending form, which is regional). While people did take surnames based on where they were from, that was an older practice and not for people actually living in the town they were originally from.

I searched for Zaniewski and Zaniewicz and both are very clearly surnames in Poland and Lithuania and probably nearby countries. I have found zero evidence that either is a place. I also looked up all towns/villages that start with "Z" in Poland, Lithuania, or Russia. I suspect that it was a mistake on the manifest. A confusion from the ship's recorder in Europe where somehow the different spelling of the name got mistaken for the town.

The actual town name is probably this one:

Which is the one you indicate in the question, but I wanted to address the false town names elsewhere in the manifest. I also looked up towns that start with "D."

Daleszyce is not a good match to the scrawl on the manifest, but it's not something I'd want to rule out quite yet. While there is not an "l" there, l's and w's sound very similar. That's the closest one I could find in Poland (but there are a couple other options on both pages of the list).

I'm getting nowhere fast; this is when I try other methods.

In 1910, he and his uncle were boarders in Maynard, MA. In 1920, his uncle had his own place in Maynard and "Stanley" was still living with him.

The document I always look for is the World War I draft registration. A large percentage of them give the town of birth for immigrants. 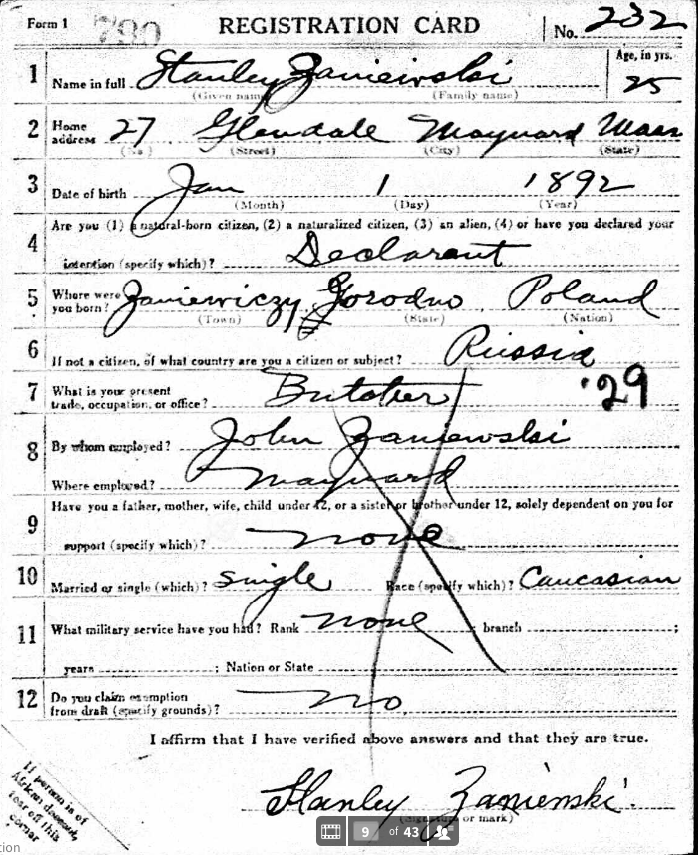 His town matches and so does his occupation of butcher, which was on the 1920 census.

We're back to the oddness of the town that is almost his surname, now spelled Zaniewiczy, but now we know it's in Grodno, Poland (now Belarus).

Zaniewicz (spelled dozens of different ways) is a parish of Grodno.

Only 10 priests come from the tiny parish of Zaniewicze, which currently does not have even 200 people.

It's also "One of the most numerous noble settlements in the Grodno region."

So there you go. Check the vital records for Grodno.

Additional tidbits: "Zaniewicze" (in slightly dated Polish, but still used) could mean "a place belonging to Zaniewski" or "place where Zaniewski family lives". And indeed, it's well documented as a - historically - a family "zaścianek", or a small private village, populated by gentry, but not much richer than peasants. There's a lot of documentation and writing about the place, mostly in Polish. https://kresy24.pl/tag/zaniewicze/ is a good starting point to find out more, including many photos. (Please remember Kresy24 will often have a strong Polish colonizer bias towards modern-day Belarus, Ukraine and Lithuania - but it's a decent source history-wise. Usually.)

Not the answer you're looking for? Browse other questions tagged 20th-century birth-records immigration poland birthplace or ask your own question.

18
What is the Russian town in this census listing?
7
Cannot find ship's manifest for family arriving in the US around 1890
13
Andrew Wilson remains an enigma
3
What German provinces were recorded in the 1920 Census?
6
Looking for 1901 birth/baptismal certificate in Poland?
2
Seeking birth record for Russian who immigrated to New Zealand in 1950s?
6
Looking for location in 1910 Russia (family spoke Polish)
4
What happened to Gustav Adolf Neumann, 1859 immigrant to the US?
5
Finding evidence for Daniel Connors' birth in Wales about 1880?
5
Narrowing down date of immigration from England to USA?