In the US Census from 1860 and 1870, I am looking for a German immigrant named Gustav Adolf (or Adolph) Neumann, born October 27, 1824 in Leipzig, Saxony (Sachsen), Germany, who immigrated to the United States departing the October 10, 1858 from Bremen, Germany arriving in New York, on January 17, 1859. Upon arrival, he dictated to the Immigration Officer that he wanted to be farmer (in the state of New York?), see supporting documents below.

However, I do not find a corresponding person neither in the 1860, nor in the 1870 US Census. Can anyone, please, help me out? 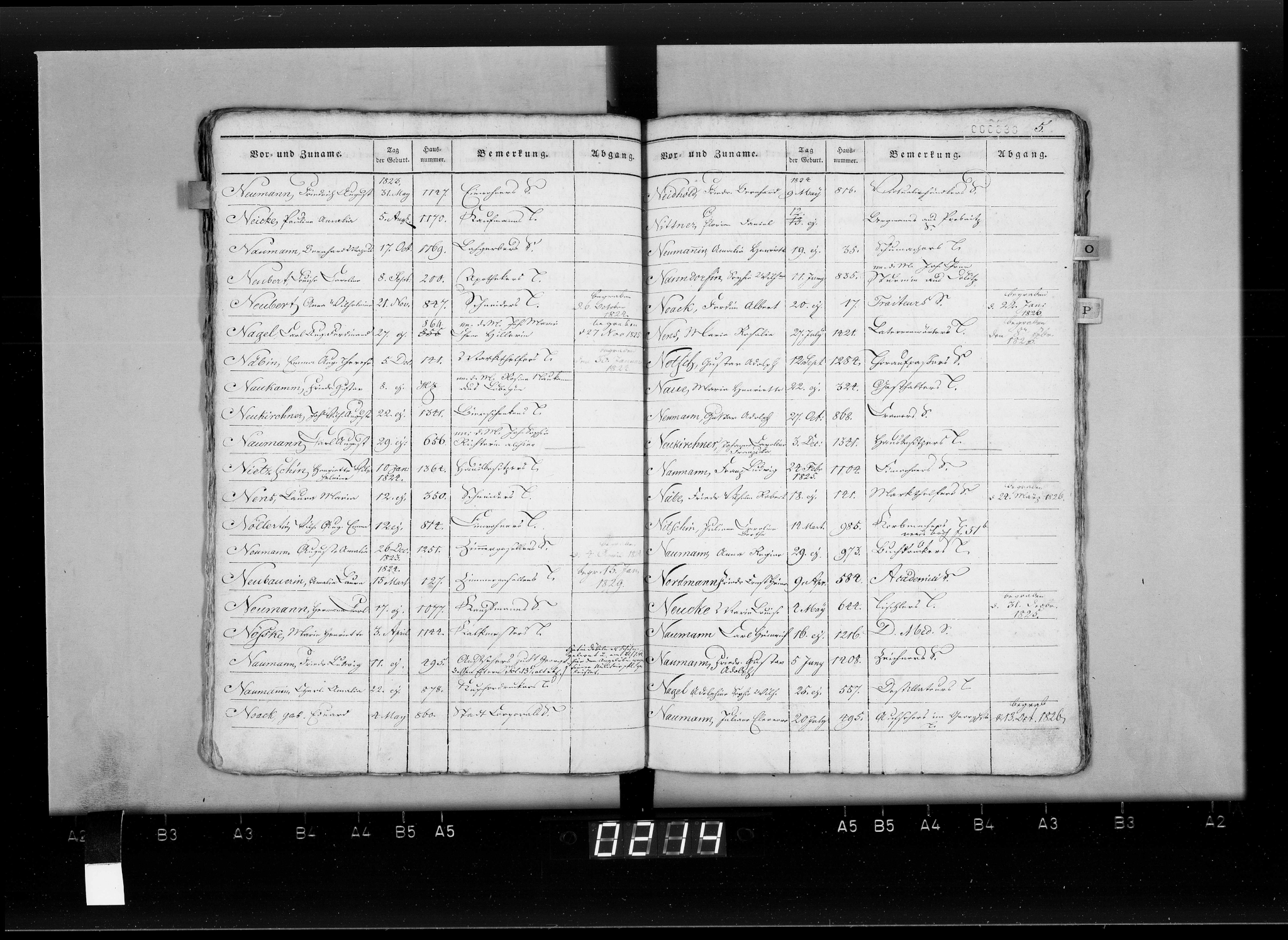 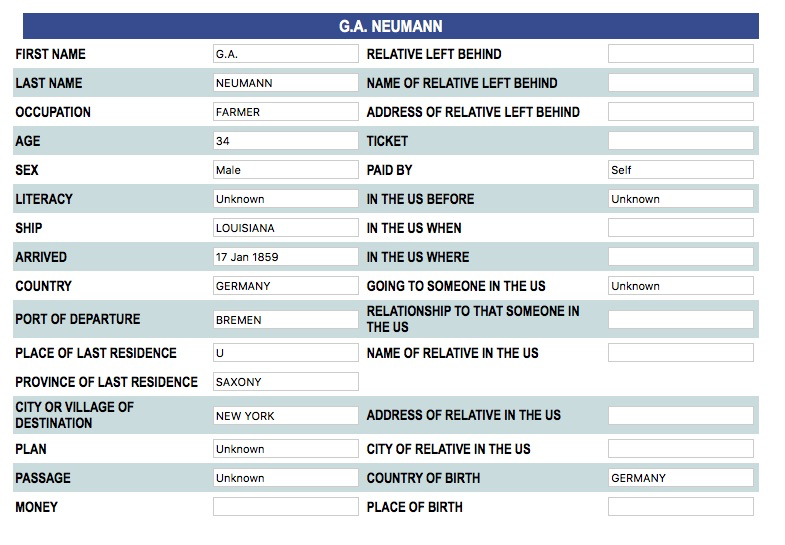 Extract of the Ship's manifest:

I have not further information or documents about this person. I do not know whether he was married nor with whom, nor do I have any knowledge whether he had (ever) children.

However, I could infer some secondary information about the things I do know, i. e. he was not married nor did he have children in Germany before departing to the US.

Unfortunately, I do not know what kind of profession he had (his father was a trader, as well as two of his brothers, two other brothers were painter and lithographer, respectively), however, I do not believe that he was a farmer in his "previous" life in Germany as he and his ancestors lived in the city of Leipzig, which did not offer a job place for farmers. If he were he would have lived in smaller towns or villages around Leipzig, which at that time and age would not have been quite likely. Maybe he picked up a job related to that and this would be quite possible in a city like New York with many newspaper circulating?

Speaking of the US Civil War, which started two to three years after he arrived, I found three entries in the Soldiers and Sailors Database (see first three entries). But no birth date is indicated for better identification.

All in all, I hoped it was easier to find out about his whereabouts, but nothing but ambiguous bits of information. :/ It looks like that back then, US censuses or other bureaucratic documents missed the attention to detailed information common in Europe!?

Regarding the question, whether I am sure about the data I have:

I inherited a vast family tree with the birth date and the day of departure of G. A. Neumann, as well as his ancestors and some dates of his siblings. Although, I do not exactly know where my great-grandfather took the information (most likely from primary data such a certificates), the data of that tree have been proven correct in other parts of the tree by primary sources (like the register shown above) I was able to find online.

In addition, I have supporting data here of a project to digitalise and index all index cards made in the 1950s+ by a professional genealogist, called Helga Moritz, who worked for the German Central Register of Genealogy in Leipzig. All data which are shown on that index card are correct with the data from the family tree given by my great-grandfather, who was dead (died in 1944) before these cards were made. So both sources, the family tree and the index cards, are unrelated and most presumably correct together with the primary source, the birth register, shown above.

Start with a document you're sure of and work your way back. The birth record and ship manifest are both good places to start, but you need more.

Gustav Adolf Neumann is a fairly common name. Dropping one of the given names, or using initials, makes your search so broad it's impossible. I found multiple people with those names born in or near 1824 in Germany/Prussia in the 1860 and the 1870 census records. But I have no way of knowing which one, if any, is your guy.

If you can find, say, a 1900 census record, or anything else where you're sure it's him, that will anchor his residency in the U.S. For example, if you know the names of his wife and/or children, that would help.

The fact that he was going to New York is not very helpful, since most of the boats went there. He may or may not have stayed. Most people going elsewhere right away said so in the manifests, but not everyone.

The fact that he was a farmer in Germany also doesn't help (he did not tell an immigration officer he wanted to be a farmer; this was his former occupation, and he told the clerk from the company that owns the ship, not immigration). It's a common profession and chances are good he took up something else in the U.S. Yes, there were (and are!) plenty of farmers in New York state. In 1860, there were even some in the city. But lots of people took jobs different from the ones they had in the old country.

Once you can establish him in a particular place, you can work backwards in city directories, voting records, tax records, and so forth. Maybe he got caught up in the Civil War. Maybe he went out west. You might find a marriage certificate or birth certificates for his kids. Or naturalization paperwork (though it won't be much that early on).

If you can narrow down his locations, you'll have better luck finding him in the 1860 or 1870 census. If you already have all these records and the census records from 1880 on, add them to your post.

The most promising docs I found that you might want to followup with are: 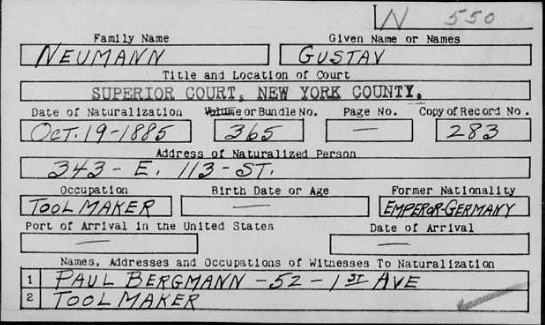 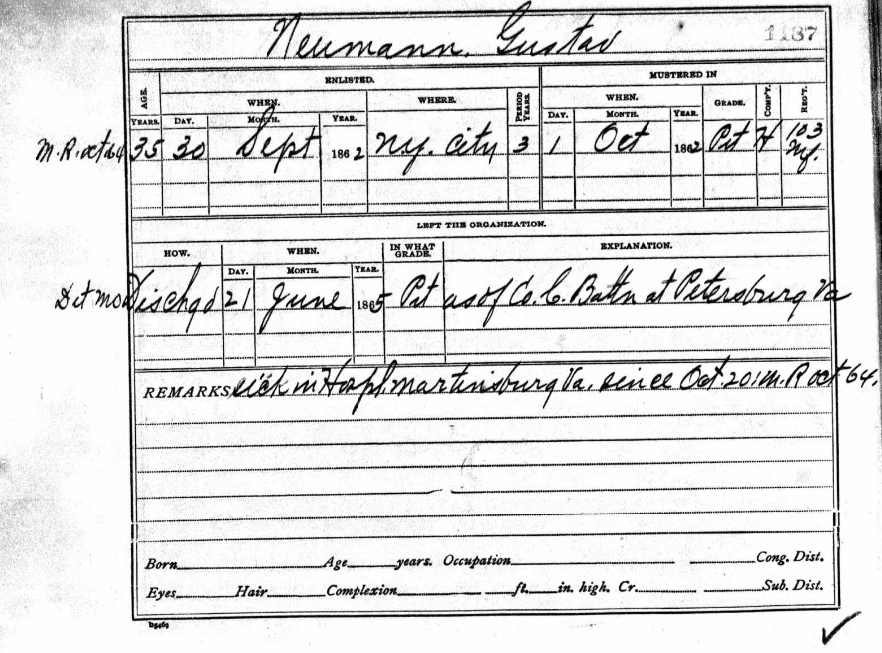 Superior Court, New York County naturalizations are available to view at FamilySearch. Bundle Number 365, File 283 is on Film # 007758713 and can be viewed here.

Not the answer you're looking for? Browse other questions tagged united-states census-records immigration 1860s or ask your own question.

7
Cannot find ship's manifest for family arriving in the US around 1890
4
Connecting with other descendants of ancestors to find place of burial?
7
Finding people who have moved within the same geographical area?
3
What German provinces were recorded in the 1920 Census?
3
Where was Matthew Nettell, of Illogan, Cornwall, for the 1861 Census?
3
Locating Charles A. Schuman's birth parents and birthplace in Germany?
4
What happened to Gustav Adolf Neumann, 1859 immigrant to the US?
5
Finding clues for a missing immigrant in the 1870 Census?
5
Determining a relationship from the 1871 census?
3
What happened to Gustav Adolf Neumann - part II?